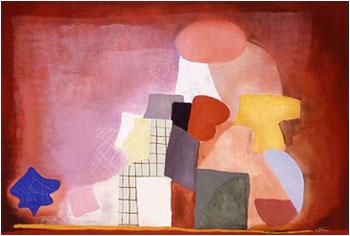 An Invitational Exhibition of Contemporary American Art
May 6 - June 20, 2004

New York: This year's exhibition, the 179th, is a non-member invitational and continues the National Academy's 179-year-old tradition of presenting annual exhibitions of contemporary art. Many of the country's finest contemporary artists working in the mediums of painting, sculpture, graphics and architecture were invited to participate by National Academicians. Included are Polly Apfelbaum, Ida Applebroog, Lesley Dill, Ming Fay, Barnaby Furnas, Sol Lewitt, Whitfield Lovell, Joel Shapiro, May Stevens, Jessica Stockholder, and architects Diller & Scofidio, among others. The selections reflect the many exciting and innovative ways in which these traditional categories can be re-visited to produce fresh artistic visions.

The 179th Annual highlights the diversity of styles in contemporary art today. Realism is explored in the pastels of Jane Lund, and in the sculpture of Judy Fox, while veteran Abstractionist Robert Natkin continues his exploration of color and form, as does newcomer sculptor Tara Donovan. Bracketed by artists under age 35, to those well established in the field, the show offers a contemporary overview of American art history â€“ with current interpretations of Abstract Expressionism, Minimalism, Realism and Post-Modernism, and almost everything in between. A curatorial committee comprised of National Academicians selected the participating artists, and another committee has been elected to award the record $170,000 in prizes, including the prestigious $15,000 Alex Ettl Prize for sculpture awarded every three years.

Major support for The 179th Annual was provided by The Peter Jay Sharp Foundation.

Tea with Poets, Sunday, May 16th, 3:00 PM
Tea With Poets: A Conversation on the 179th Annual
A discussion of the exhibition from the perspective of several prominent poets, moderated by William Corbett