Radical Aesthetics #2 Jasmina Cibic. The project reformulates the exhibition space as a combination of gallery, film set and theatre, as the many elements oscillate between prop, sculpture and to stage. 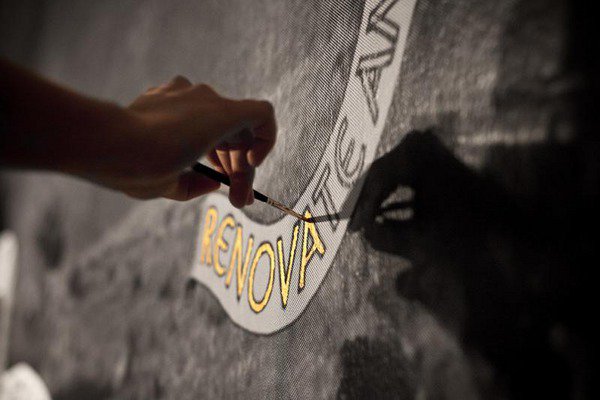 Living space “the future of life, the striving for development and desiring”, is slowed down in its development by ornament. With this argument, Karl Krauss, one of Europe’s first satirical writers, opposes the use of decoration in architecture and language, in his essay Spielraum (1912).
Nevertheless, ornament and decoration are being built all the time, released along patriotic political authority and set in stone by renovation, rewriting, erasure, destruction and renaming. Most (trans)national political agendas build their way into our culture with tactics such as these.

Slovenian artist Jasmina Cibic’s project Spielraum, both informative and appeasing, considers decoration as the key element in the creation of patriotic spectacle and takes the lifespan of its application to the test. The project reformulates the exhibition space as a combination of gallery, film set and theatre, as the many elements oscillate between prop, sculpture and to stage. Spielraum invites us to experience the programmatic decoration behind a composite cultural heritage, pointing to the similarities between different ideological spaces and their relation to representation and soft power. Reflecting our own interwovenness with the heritage we surround ourselves with, Cibic’s project plays with the visual renegotiation and a critical study of this symbolic order and proposes us to (re)consider the very understanding of this heritage.

Jasmina Cibic’s work explores how symbolic forms and language ideologically resonate in our lived environment. Through research, she gains a concentrated focus on all structures and systems involved within set (trans)national formulations. As a true visual artist, she weaves together ready-mades ranging from language and architecture to historical events and combines them in new forms of sculpture, two-dimensional works, film and performance that, in bigger shows, are being delivered in installations spanning the entire space. She presents us carefully staged, renegotiated parts resulting in a full scenographic totality.

Among other archival sources, the project draws on the plans and designs of the city of Belgrade for the first Conference of the Non-Aligned Movement in 1961, utilising the decorative architectonic elements of these documents and turning them into sculptural forms, exhibition furniture and film props. In the exhibition at Onomatopee, they are set against wallpaper murals of a landscape: a panoramic representation of a fictitious territory that the artist has composed from images drawn from Tito’s personal photographic archives, presenting picturesque and sublime landscapes that served his idea of the state. Within this composite, Cibic displays quotes from various political speeches on nation building, as blown up banners deposited throughout the imaginary territory.

Playing the identification of identity, Radical Aesthetics is a series of solo shows in which Onomatopee offers expanding orientation and provides further perspectives into the symbols we currently identify with. In every Radical Aesthetics exhibition, the experience of the art-work, in this case a performative video installation, is flanked by a secondary space that allows for further interaction. The interior is designed by PeLiDesign, the content edited by Onomatopee. Featured here are a video interview with Jasmina Cibic about her work by the critic Max Bruinsma; research material to browse through such as writings on protocol architecture and the Non-Aligned movement; and a specially-offered playful workshop titled Instructions, co-designed by Jasmina Cibic and Onomatopee, in which the public is invited to compose their own version of a political speech which endorses a new visual idiom, based on the political speeches that went to shape the aesthetic forms of the contemporary urban landscape as we know it today.

The exhibition is made possible with the support of the Mondriaan Fund and the municipality of Eindhoven.
Partner in the publication: Museum of Contemporary Art Belgrade

Image: detail of the performance Show the Land in Which a Wide Space for National Progress is Ensured, 2015, wallpaper, gold paint, dimensions variable Exhibition view: Tear Down and Rebuild, Salon of the Museum of Contemporary Art Belgrade, 2015

Opening: November 28, 5–11pm, with a performance by Jasmina Cibic