In / out of all proportion. Despite their generational differences, both focus on nonrepresentational painting and the process of multifaceted transformation that this medium has undergone from circa 1945 until today. 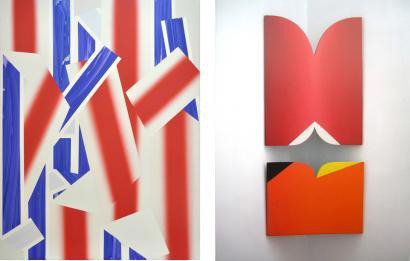 WAGNER + PARTNER is pleased to present the duo exhibition of two Polish artists, Małgorzata Szymankiewicz (*1980) und Jan Berdyszak (1934-2014). Despite their generational differences, both focus on nonrepresentational painting and the process of multifaceted transformation that this medium has undergone from circa 1945 until today. This is undoubtedly painting after the end of painting – self-critique and analysis that despite addressing (and ignoring) the relationship with reality, also debates the genre’s tradition in itself.

Szymankiewicz and Berdyszak are driven by the following questions: which approach persuasively depicts space on a surface? To what degree is it possible to de/re-construct and fragmentise a painting, before its identity is stripped? What potential does a hole or negative space have in a painting? How is it possible to play with phenomena of absence in order to realise new and surprising aspects of space? Is there potential to go beyond a painting’s boundaries and yet still stay within the genre? Do we still need traditional, harmonious and balanced compositions with an almighty central focus?

Szymankiewicz’s and Berdyszak’s paintings are always contextually consistent and hence act like a kind of trap for a space. They oscillate between modern and postmodern, ignoring all of Art History’s prevailing divisions. Berdyszak’s paintings are among the so-called shaped canvases; those that are no longer rectangular, and these atypical formats create a strong tension between painting, wall and space. The Polish artist defined this from an ontological and transcendental perspective: the concept of space as the nature of being draws on similarities with the theories of the German philosopher Max Bense, who viewed space as a metaphysical phenomenon: “In the beginning there was the space. It is only in the space that everything happens, day turns to night. […] Space and being are fundamentally identical, they are the one and the many, and therefore they are conclusive.” It is up to the viewer whether Berdyszak’s paintings speak only of formalism or allude to a play on the universe.

Szymankiewicz often works with self-styled and handcrafted brushes in order to create the desired appearance of a gesture on a canvas. Her paintings maintain a balance between impersonality and individuality, but also between order and expression. The contemporary character of her paintings is also striking: the series Postproduction can be interpreted as an examination of whether originality is possible in the Internet age. Szymankiewicz enjoys working across media: she develops objects that exist in a fascinating dialogue with her paintings. That which can only be virtually three dimensional on a canvas, materialises in the form of an installation. The elements from the series I'm better I'm back simultaneously inspire associations with forms of nonrepresentational art together with sport equipment, which serves today as the body’s self improvement. Szymankiewicz – as a representative for her generation – mixes several aesthetics together: the tradition of elite modern art and current pop cultura phenomena.

In Szymankiewicz’s art – as in that of Berdyszak’s – the viewer is confronted with fragments, which perform together in unison. The answer to the question about the difference between fragment and whole is no longer possible. However, is this a question that is only relevant in the field of painting – or one that is universally pertinent today?
Prof. Dr. Marta Smolińska
University of Fine Arts Poznan

The works of Malgorzata Szymankiewicz are shown in cooperation with BWA Gallery in Warsaw.