The Importance of Being...

The exhibition brings 40 of Belgium's most prominent artists in several disciplines together. The plurality of discourses, the transversal approaches of most artists and the international nature of the proposals also allowed the curator to establish important links. 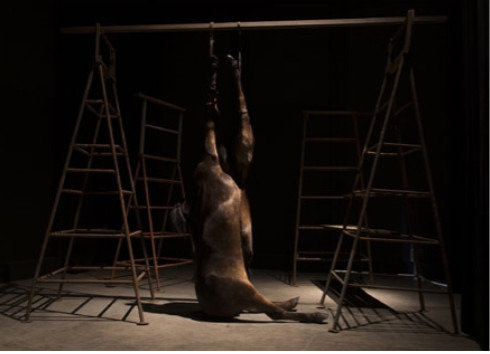 ‘The Importance of Being …’ was initiated when the Museo Nacional de Bellas Artes de Cuba invited Bruno Devos to organize an exhibition on Contemporary Belgian Art in the broadest meaning possible. For the project the up-and-coming Cuban curator Sara Alonso Gómez was chosen. Being specialized in contemporary art she has developed a fresh vision to connect the Latin-American audience and Belgian artworks.

Mission
By connecting Belgian Contemporary Artists and the very dynamic Region of Latin-America via this expo we will achieve artistic, economic and cultural exchange and recognition of the quality both art worlds have to offer.

In the expo Belgium as a departure point functions as a laboratory/platform with specific but also global cultural dynamics and geopolitical approaches, in the center of Europe, on the decision-making and towards the rest of the world.

A word from the curator
The exhibition “The Importance of Being …” gathers 40 artists (born or working in Belgium) offering a vast panorama of contemporary art in the country, without intending to encompass thoroughly. I never cease to be amazed at the quality and the extensive number of artists working on Belgian soil, nor at the institutional support they receive.

Over the past two years, dialogue with the artists allowed me to grasp how they positioned themselves their work in relation or not with that identity (polymorphous, multilingual and transcultural). The denial of this construct became my own refusal, in order to get rid of possible ties and preconceptions and thus leaves open the canal to doubt and constant questioning.

The plurality of discourses, the transversal approaches of most artists and the international nature of the artistic proposals also allowed me to establish important links, bridges and communicating vessels with other latitudes, and ultimately, with target visitors for this project in Latin America. A range of transversal conceptual trends are proposed which try to map common problematics we shared today, but that we might understand and express differently depending on the specific context.
Sara Alonso Gómez

Introduction of the title of the exhibition
“The Importance of Being …” is the deliberate appropriation of the eponymous play “The Importance of Being Ernest” by Oscar Wilde. The parallels with the English farce of the nineteenth century are more of those of opposition. It doesn’t lie on the idea of re-reading his work, but to use the crossword it gives us of an epoch that would, as a parable, attempt to shed light on the world where we live today, with all the irony, sarcasm and playfulness present in Wilde.

“The Importance of Being …” is an address whose grammatical unfinished and open structure leads first to the suspense, and then to the ambiguity. It allows us to introduce the philosophical question of Being in its own equation and definition between and by time and space. From the ontological point of view, the definition of that being or entity encompasses reality par excellence, in its widest sense and also in its relation of denial.

The reflection on this issue has taken place for millennia and across the globe (Aristotle, Wang Bi, Heidegger, Heraclitus, Nietzsche, Parmenides, Plato, Sartre, Lao-Tzu and many more). And it still a contemporary issue. The problematic of Being nowadays changing face in the dynamics established by the present contemporary world makes expressions such as culture constantly question their position in relation to a given space and time; they are also mutants. In this sense the exhibition, from the orchestration of a polyphonic concert poses questions in fugues to prevent “messianic” approach. My ultimate goal will be to give the visitor the possibility of recognition, contradiction, apprehension, and of avoidance.
Sara Alonso Gómez

Instead of declaring the problematic in the first instance, the recognition by the audience will happen in reverse. Each conceptual entry is introduced by the quote of a chosen universal literary work. Extracted from timeless stories and novels, quotations have been selected according to different problematic associated with the Being in the contemporary world, outlined / explored by the exhibition. After reading the quote and establishing the links with the artwork the audience comes to the recognition of the problematic.

These conceptual trends will be further explored by contributions of important and recognize Belgian and international authors in the catalogue.