A group exhibition that addresses the presence and influence of sound in the production of contemporary art. Challenging the categories of 'sound art' and 'visual art,' this exhibition explores the spectrum between the two practices. Treble -in addition to defining a high pitch- also means triple, and the exhibition focuses on how sound informs the way artists think about sculpture, drawing, and architecture. 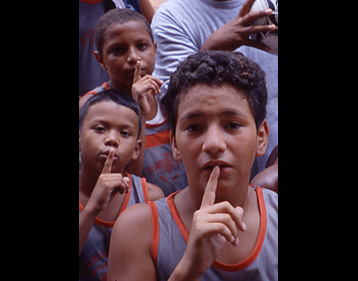 An exploration of sound as material and subject in contemporary art

SculptureCenter is pleased to present Treble, a group exhibition that addresses the presence and influence of sound in the production of contemporary art. Challenging the categories of "sound art" and "visual art," this exhibition explores the spectrum between the two practices. Treble -- in addition to defining a high pitch -- also means triple, and the exhibition focuses on how sound informs the way artists think about sculpture, drawing, and architecture. Twenty-two North American, European, and South American artists and artist teams contribute works, including five new site-related projects that create bold physical encounters, palpable silent moments, and intimate listening experiences. Treble, organized by independent curator Regine Basha, will occupy the entirety of SculptureCenter's indoor and outdoor exhibition spaces. The exhibition will be on view May 16 - August 1, 2004.

The last decade has seen a resurgence of artists working with sound as a sculptural form, both metaphorically and materially. Just as contemporary sculptors are challenging the rules of sculpture as an artistic category, artists who work with sound are developing languages that defy medium-specificity. Many take cues from the late 60s and early 70s, looking to the Minimalist and Fluxus aesthetics of John Cage, David Tudor, or Yoko Ono, while others draw inspiration from more recent popular music cults. Max Neuhaus, among the first to explore the relationship between sound and space in his early installations - and whose drawings are included in Treble, - provides an important foundation for the exhibition with his call for the dissolution of the term "Sound Art."

Choosing to highlight the many ways in which sound can inform the production of contemporary art, this exhibition explores conceptual, material, and situational approaches that generate actual and/or implied aural experiences. The works in Treble exist beyond the limiting categories that define "sound art," "sculpture," "drawing," or "architecture," reflecting a generation of artists seeking to move freely between disciplines. These artists create meditations on drawing through sound, sound through drawing, sculpture as an ephemeral and time-based sonic experience, objects as potential sound, and architecture as an acoustic vessel.

Working closely with SculptureCenter's building, Rio de Janeiro-based artist Paulo Vivacqua presents a site-specific sound installation for the courtyard. New York-based Andrea Ray constructs a meditative installation of sound and salt inspired by the lower-level vaulted spaces, while Grady Gerbracht uses the stairwell to outline an immersive sonic portrait of the building through its acoustic properties, its materials, and its renovation blueprints designed by artist/architect Maya Lin. Certain works trigger a charged silence, such as 1 Minute of Silence (2003) by Mexico City-based artists Francis AlÃ¿s and Rafael Ortega, documenting a street performance work in Panama City, while others reveal an implied, or latent sound, such as those of Americans Jim Hodges, Jude Tallichet, and Dario Robleto. The sonic potential of negative space appears in Argentinean artist Jorge MacchiÂ¹s collage-based musical composition, British artist Cornelia ParkerÂ¹s lint-earplug sculptures, Joseph BeuysÂ¹s blackboard eraser, and Mungo Thomson's The Collected Recordings of Bob Dylan 1963-1995 (1999-2004), which aurally and visually edits the famous musician's performances down to only the applause. In other works, exercises of enunciations and performed speech, generate a tension between reading and listening, as in Joseph Grigely and Amy Vogel's You (2001), Steve Roden's Letter Forms (2003), and David Schafer's General Theory (2004).

TrebleLive: a Music Series at SculptureCenter
All TrebleLive performances will take place at SculptureCenter. The series carries the three-part focus of the Treble exhibition -- sound informing drawing, sculpture, and architecture -- into live performance by featuring experimental acoustic and electronic composers. Consisting of new works and new collaborations initiated specifically for this series, each event celebrates the moments when objects, drawings or spaces become music.

Saturday, June 26, 4:30pm:
Architecture: Gregor Asch aka DJ Olive the Audio Janitor presents a new work, Buoy, a soundtrack for an invisible intimate encounter, a reminder of our constant desire to feel our surroundings and understand architecture through our fingers as much as our eyes.

Additional information on Treble events is available upon request. Please check this space or our calendar of events for ongoing updates.

Image: Francys Alys and Rafael Ortega, One minute of silence, 2003

For information or photographs, please contact Michele Snyder at 718 361 1750