Art is always about the experience of boundaries, and about transcending them. It is about how identities form, prove themselves, and transform along their boundaries. This is what makes art topical in a situation where almost all boundaries are shifting, changing, sometimes even vanishing, then forming anew: just consider globalization, genetic engineering, or nanotechnology. Inside and out, in subjective experience as in the experience of subjectivity, in dealing with physical matter as in dealing with information, the one thing today that is certain is that nothing is certain.(P. Noever) The work of artists from widely diverse cultures and aesthetic backgrounds from all over the world that is presented the exhibition, casts some light on this situation. 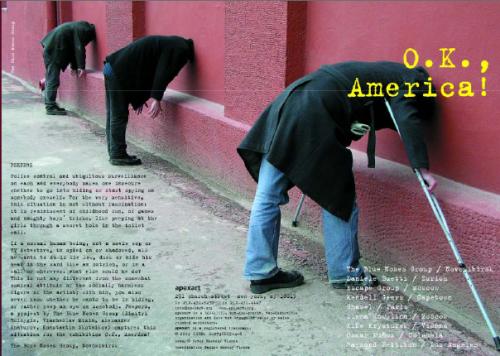 Art is always about the experience of boundaries, and about transcending them. It is about how identities form, prove themselves, and transform along their boundaries. This is what makes art topical in a situation where almost all boundaries are shifting, changing, sometimes even vanishing, then forming anew: just consider globalization, genetic engineering, or nanotechnology. Inside and out, in subjective experience as in the experience of subjectivity, in dealing with physical matter as in dealing with information, the one thing today that is certain is that nothing is certain.

It is indeed a time of uncertainty: the grandiose mantra 'Anything is possible' issued by a purportedly triumphant late Modernism today also shows its frightening side, namely that in fact anything is possible â€” both freedom and repression â€” and that there are no established criteria or categories at hand to relieve us from our responsibility at the one unalterable boundary, that of decision.

The work of artists from widely diverse cultures and aesthetic backgrounds from all over the world that is presented in Peter Noever's apexart exhibition, entitled O.K., America!, casts some light on this situation. It makes it imaginable, visible, and, above all, manageable. It also makes palpable its spatial and subjective globality, thus also making it clear there is no longer any possibility of opting out, of exempting oneself through some technical trick. Ever since it technologically appropriated memory, technology itself is, by the standards of traditional individuality, an unlimited possibility. On the basis of electronically generated real-time information, personal identity as defined by the laws of nature is doomed to fail as a control unit. Where nano- and peta-units are being manipulated, there is nothing left for human hands to do. Any typical computer spreadsheet program incorporates more experience of frictionless, purposive interaction than all the world's brain trusts could ever contribute to a discussion, which would in any case be thrown into chaos.

Assuming the role of the sorcerer's apprentice is no way out, either. Technological progress, it is true, seems to have thoroughly done away with the myth of nature as an independent normative force. However, this is precisely what reaffirms culture as a formative function, not merely a descriptive, and thus perhaps nature-delimiting, one. Unlike nature, which is common to all, there is no such thing as one culture; hence virtually no one culture can serve as an objective criterion or standard. After the death of God, other gods have returned in various guises and under many different names, and they can no longer be banished by enlightened Reason or its emanation, technology. However appealing the invocations of ''tolerance'' and ''correctness'', these are no universal values.

With the ''new global order'' both the unity of the body and of language have been lost. Or, at the very least, it has facilitated the insight that neither ever really existed; they were but a projected goal. It is the same old story: it is in battle or in its civilized form, competition â€” in utopian terms, concerted work â€” that we, however different, are united. It is victory that disrupts unity.

Identity is contradiction, not affirmation. It is the palpable experience of confronting arbitrary limits, distinctions, established truths, and decrees. The culture of this contradiction is art, which also contradicts anything it is supposed, or defined, to be, in favor of the sake of the monologic power of affirmation: entertainment, amusement, decoration â€” and self-realization.

O.K., America! presents varying views of this dream, thrown into perspective through art. This is a dream the world has come to call the American dream â€” a dream of freedom from contradiction, of identity by affirmation, of sovereignty as omnipotence â€” of the reality of the possible.

Peepers
Police control and ubiquitous surveillance on each and everybody makes one insecure whether to go into hiding or start spying on somebody oneself. For the very sensitive, this situation is not without fascination: it is reminiscent of childhood fun, of games and naughty boys' tricks, like peeping at the girls through a secret hole in the toilet wall. If a normal human being, not a movie cop or TV detective, is spied on or shadowed, all he wants to do is lie low, duck or hide his head in the sand like an ostrich, or in a wall or wherever. What else could he do? This is not any different from the somewhat comical attitude of the socially harmless figure of the artist; with him, you also never know whether he wants to be in hiding, or rather keep an eye on somebody. Peepers, a project by The Blue Noses Group (Dimitri Bulnygin, Viacheslav Mizin, Alexander Shaburov, Konstantin Skotnikov) captures this situation for the exhibition O.K., America!
-The Blue Noses Group, Novosibirsk

o.k., america and the others
...
Feeling the taste of Coca Cola on one's
lips for the very first time
Pronouncing the name of the President
Touching the computer keys
Reading a newspaper on one's own
Getting a passport
Opening a bank account
Buying a car
Having one's photo taken at the Statue
of Liberty ...
-Escape Group, Moscow

This exhibition is supported in part by the Austrian Cultural Forum New York. apexart's exhibitions and public programs are supported in part by The Andy Warhol Foundation for the Visual Arts, the Kettering Family Foundation, the Peter Norton Family Foundation, and with public funds from the New York City Department of Cultural Affairs and the New York State Council on the Arts, a State agency.