The exhibition Art and Utopia. Action Restricted reexamines some of the key moments in the exchange between art and poetry in the twentieth century up until the end of the 1970s. The Mallarmean poetic serves here as a medium for a history of modern art in its relation with language and its dispersion. 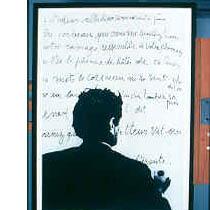 'Action Restricted' (L'action restreinte) is the title of an essay by StÃ©phane MallarmÃ© (1842-1898) compiled in Divagations in 1897. This formulation designates not only the limits but also the focus of poetic action.

At the end of the nineteenth century, after the death of Victor Hugo, the poet can no longer claim to operate directly in the political arena or even designate himself as moral conscience. He can mention the world, give the world a verbal equivalent, but he cannot change it.

His activity, however, is not purely contemplative. He realizes an action in a restricted but essential field, which does not belong to him but which he can reevaluate and even redefine. This is the field of language and languages; it is the space of the book as a 'spiritual instrument.'

The exhibition Art and Utopia. Action Restricted reexamines some of the key moments in the exchange between art and poetry in the twentieth century up until the end of the 1970s. The Mallarmean poetic serves here as a medium for a history of modern art in its relation with language and its dispersion.

Art and Utopia: Action Restricted, an exhibition presented by MACBA within the framework of Forum Barcelona 2004, is rooted in an observation made by Marcel Broodthaers in 1970: "MallarmÃ© is the source of all contemporary art... he unconsciously invents the modern space." On the basis of this interpretation and the French poet's influence on such fundamental figures of modernity as Artaud and Apollinaire, the exhibition offers a reinterpretation of 20th century art from cubism and the historical avant-garde movements to the present by questioning the very notion of modernity and the established relationship between art and utopia.

Through his texts, MallarmÃ© vindicated poetry as action, but an action restricted to the realm of books, and with the peculiarity that books are spiritual instruments that enable the creation of spaces for psychic and symbolic mobility which can be linked to a social utopia. For MallarmÃ©, poetic language seeks to create a system of elemental signs and intervenes in social reality, transforming everyday life and putting the reader in the position of the artist. The exhibition will reveal how the concept of the element, through the constructivism that arose from Dadaism, allowed the language of the poetic realm to be projected into the space where everyday objects were produced. It was in this way that, in certain situations, this specific language was applied to social reality. Utopia transformed everyday life and placed the public in the position of the artist. The experiences of applied utopia constituted a major step in the tradition of the fine arts. Innumerable applications of this construction can be found in painting as the ideal incarnation of the autonomy of a work of art, and also in all trends of so-called pop culture: film (S. M. Eisenstein, Jean Vigo), photography (Aleksandr Rodchenko, Walker Evans) and comics (George Herriman). We will demonstrate that the concrete representation of MallarmÃ©'s idea is a "vulgarization" of the wise language of the avant-garde movements, and runs the risk of its being dissolved in the culture of commerce and leisure.

The definition of art as the transformation of that which is common to everyday life has undergone new changes resulting from the advent of mass media and the emergence of consumer society during the pop years. The idea of a specific poetic language, however, has persisted with a critical approach. The exhibition will shed light on the often-fertile crisis of certain kinds of art that began in the 1960s. We will examine Broodthaers, but also Ã–yvind FahlstrÃ¶m, from Sweden; HÃ©lio Oiticica, from Brazil; and American Robert Smithson. We will remind visitors that certain privileged encounters such as the one between musician John Cage and artist Robert Rauschenberg gave new impetus to the game of poetic thinking that was already underway, against the fascination of terror and the vertigo of self-destruction. Much like the celebrated series by Joan MirÃ³ at the onset of World War II, this exhibition will be a constellation, recapturing the moment of specific experiences: Paris, Munich, Zurich, Moscow, Barcelona, New York... But other places as well, other frontiers not necessarily considered the focal point of modernity. We will also show how the language of the body from Dada performance to contemporary dance (especially the notations of Trisha Brown) has been incorporated in the interplay between poetry and visual art. Art and Utopia: Action Restricted will include works by Joseph Albers, Hans Arp, Antonin Artaud, Alighiero Boetti, Marcel Broodthaers, Joan Brossa, James Coleman, RenÃ©e Daniels, Marcel Duchamp, Lucio Fontana, Julio GonzÃ¡lez, Philip Guston, Paul Klee, Roberto Matta, Joan MirÃ³, Jorge Oteiza, Francis Picabia, Pablo Picasso, Robert Rauschenberg, Wladyslaw Strzeminski, Jeff Wall and many others.