Manifesta 5 as curated by the team of Marta Kuzma and Massimiliano Gioni opens to include over fifty artists from throughout Europe. Departing from the notion of the city as a territory, the curators refer to Manifesta 5 as an instrument of investigation into Donostia-San Sebastian as a privileged social site and catalytic trigger to launch the formulation of their project. Deferring from the spectacle of the political and bypassing contemporary art's recent obsession with global geographies, the works within Manifesta 5 illustrate how the cryptic, opaque and enigmatic may reveal the subtlety of the polemical and the potential of its transgression. 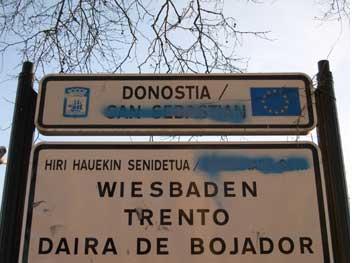 Manifesta 5 as curated by the team of Marta Kuzma and Massimiliano Gioni opens on June 11th, 2004 to include over fifty artists from throughout Europe. The project in Donostia - San Sebastian is organised by the Amsterdam based International Manifesta Foundation together with the Basque Government, the Territorial Council of Gipuzkoa and the Donostia-San Sebastian City Council.

Departing from the notion of the city as a territory, the curators refer to Manifesta 5 as an instrument of investigation into Donostia-San Sebastian as a privileged social site and catalytic trigger to launch the formulation of their project. Deferring from the spectacle of the political and bypassing contemporary art's recent obsession with global geographies, the works within Manifesta 5 illustrate how the cryptic, opaque and enigmatic may reveal the subtlety of the polemical and the potential of its transgression.

Manifesta 5 attempts to explore cultural landscapes as they get refracted through hieroglyphic languages. The projects developed in Manifesta 5 concentrate on the formulation of intricate and idiosyncratic structures that translate reality into enigmatic forms, corresponding to a more stratified understanding of the complexity of one's relationship to the world. Such complexity reveals contradictions and simultaneity - between the demand for order and the will for formlessness, between the rational and irrational, construction and expression, the performative and static, and between symmetry and chaos, violence and rupture.

In approaching Donostia-San Sebastian and its broader Basque territory as a zone of contingency, Manifesta 5 and the artists involved in the project turn to time and space as malleable, locating their works within a temporal gap that houses at once the past, the present and the future.

The articulation of the exhibition endeavours to reflect those tensions endemic to the region and the spectral doubling of place by occupying both the historic centre of Donostia-San Sebastian and its industrial, peripheral counterpart - the port town of Pasaia. Extending beyond the symmetry, order, homogeneity, and leisure of San Sebastian into the polemics of its neighbouring Pasaia, Manifesta 5 aims at revealing the essence of something that is simultaneously economic, political, historical and aesthetic.

In looking for clues within the physical space of its inception, the curators initiated the Office of Alternative Urban Planning in September 2003 with the Berlage Institute, a Rotterdam based post-graduate laboratory of architecture and urban research, directed by the architect Alejandro Zaera Polo. Together with a designated team of architects led by Sebastian Khourian, the curatorial team explored how Manifesta, as a cultural project, might enable the reinvigoration of Pasaia as one of the most impoverished areas in the Gipuzkoa territory located outside San Sebastian's city center.

The Collaboration with the Berlage Institute (Office of Alternative Urban Planning)
The collaboration with The Office of Alternative Urban Planning (OAUP) was not merely focused on the essence of its findings, rather on its possible effects of research. This method of investigation proved one way to abstract from the built environment and from the irregularities relating to the traditional flow of city, region, province and state, implicit of the Basque territory to find new articulations of political, cultural, and social formations.

The involvement of the OAUP was also crucial in overcoming the bottlenecks associated with the complicated layers of public administration to facilitate the role of curators, artists and cultural producers as negotiators. As a laboratory of ideas, OAUP provided scenarios that extended Manifesta's role into a feasibility study as to how cultural agents and artists may provide alternative solutions to reviving areas such as the port city of Pasaia. Since the programme's inception, Pasaia has been designated as a priority within the region whereby Manifesta 5 serves as the catalyst in diversifying an area formerly cut off from its community.

The Formation of a Forum of Cultural Production as an Open Source
The Office of Alternative Urban Planning and the integration of artists who have also been in direct negotiation with the city and regional administration pressed for a type of activation of a former dead zone within the industrial port of Pasaia - within a disgarded warehouse referred to as Casa Ceriza and a former ship building plant, Ondartxo: both venues will not only function as sites for the duration of Manifesta 5, but they will remain as pilot projects for cultural production beyond the closing date of the exhibition. In this way, the curatorial team has attempted to broaden the category of Manifesta 5 as an art event and to focus on its performativity. This approach extends the decision not to entitle Manifesta 5 with one title or unique theme, but with numerous concepts that relate both to the complexities of the region housing the project, and the open diversity of today's art and reality.

The Catalogue
A full catalogue will include artists' representation and contributions, the Manual produced by the OAUP, and introductory essays by each of the curators, Andrew Benjamin, Alexander Garcia Duttmann, Dan Graham, and Peter Osborne. Additional essays in relation to OAUP by Alejandro Zaera Polo and Sebastian Khourian.

Programming
An additional academic program related to the issues explored by Berlage and within the exhibition will be held at the time of Manifesta 5.

The Venues
Arteleku houses the OAUP. Participating artist projects located throughout Donostia-San Sebastian - in the cultural center of Koldo Mitxelena, Kubo Kursaal within Rafael Moneo's Kursaal, Museo San Telmo, the Aquarium and Soto of the Aquarium, a former storage house for boats in the historic port of San Sebastian. In complement to the projects in San Sebastian, artists projects will also be located in Pasaia- in the former fish warehouse of Casa Ciriza and the former boat building space of Ondartxo.