Chinese contemporary art is certainly one of the most significant elements in today's global art scene. Like the speedy modernisation in China, the Chinese art world is doubtlessly one of the most dynamic and developing at incredibly rapid paces. In the meantime, Tens of artists have been presented in major international art events such as Documenta, biennales and triennales in Venice, Sao Paolo, Gwangju, Yokohama, Shanghai and other cities while numerous thematic exhibitions focused on Chinese contemporary art have been organised throughout the world for the last decade. It's not exaggerating to say that a new global centre of contemporary art activities is being formed around the Chinese art scene. 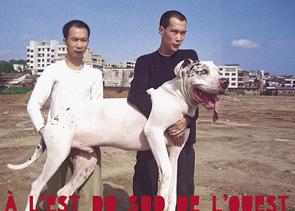 As part of the AnnÃ©es croisÃ©es France Chine 2004/2005, two art centres in the south of France are joining forces to put on a two-part exhibition, first from 17 April to 3 June at the Villa Arson (Nice), and then from 18 June to 12 September at the CRAC (Centre rÃ©gional d'art contemporain, SÃ¨te)

Chinese contemporary art is certainly one of the most significant elements in today's global art scene. Like the speedy modernisation in China, the Chinese art world is doubtlessly one of the most dynamic and developing at incredibly rapid paces. In the meantime, Tens of artists have been presented in major international art events such as Documenta, biennales and triennales in Venice, Sao Paolo, Gwangju, Yokohama, Shanghai and other cities while numerous thematic exhibitions focused on Chinese contemporary art have been organised throughout the world for the last decade. It's not exaggerating to say that a new global centre of contemporary art activities is being formed around the Chinese art scene.

The Chinese art scene is extremely diverse and complex. Different generations of artists, living in different parts of the country, have been influenced by different cultural, historic, geographic, social and economic traditions and conditions although they are sharing a considerable amount of elements and dealing with an increasingly open reality, the rapid modernisation of the country. Chinese art has never existed as an entity. It's only a denomination for convenience. The energetic and speedy development of contemporary art in China today is a result of the very dynamics and tension of interactions between a common social background and individual imaginations. In the mist of the tension, artists are producing huge amount of works, ranging from painting to video, from performance to installation, from multimedia to conceptual interventions..., to express their reactions to the theatrically changing reality and their commitments of inventing new identities of those who take part in the tide of mutation. In the process, it's essential to emphasize the importance of individual stances â€“ the motivation of seeking individual freedom and refusals to be seen as 'representative' of any national culture is one of the common engagements and strategies shared by the artists in their negotiations for spaces of creation in the turbulent change of the country. The diversity of today's contemporary art works and activities in China proves perfectly such a tendency.

China is increasingly integrated into the global system of modernisation in all domains, including art creation. Global perspectives are an inherent part of the making of the contemporary art scene in the country. Being international is another aspect of the artists' identities organically related to their efforts of taking individual stances. It's of course an essential part of their artistic languages. Contemporary art in China has always been a product of international exchanges. Living in the unprecedentedly globalised world, Chinese artists are often great travellers. Many of them have also emigrated to other countries. Participating with their particular languages in the reconstruction of a truly global art world is now a common task for them while the global dimension is even more rapidly absorbed into the making of new Chinese art. With their unique and rich experiences of surviving and conquering the harsh reality of being immigrants, many Chinese artists living abroad, especially in traditional centre of modern cultures, namely the West, are now becoming an indispensable force of the local scenes of their adopted localities. In other words, their highly inventive works, of fully charged of critical power facing their realities and destinies, play major roles in the mutative process of remaking of Western societies. Artistic creations of the Chinese Diaspora are becoming a particularly focus of attention in the international art world today. France is no exception.

It's equally considerable that the internal situation in China is also encouragingly shifting towards further openness. Some major events like Shanghai Biennale, Shenzhen International Public Art Exhibition and the upcoming Guangzhou Triennale are now among the most significant international events in the Asia-Pacific region while numerous smaller scale exhibitions with Chinese and international artists are booming across the country.

No doubt, this process of opening towards the outside world brings the artists to face directly the reality of globalisation and its problems. Testifying the current geopolitical events such as wars, terrorism, global economic struggles, ecological crisis, human rights crisis and so on, they are working in depth to question and comments on key issues such as geopolitical power, capitalism and democracy, etc.. Thanks to the exercises of confronting with the world, their exploration of questions raised from their own everyday lives and personal universes are brought to totally fresh insights while their artistic languages are radically innovated. The immense sense of humour and idealist criticality expressed in their works are probably the most impressive sign of their vitality. This continuously helps them opening new spaces for imagination and creation in the country as well as in the world.

Chinese contemporary art is entering a period of reorientation. This reorientation is no longer oriented into one main movement or tendency as many may expect. Instead, it's leading to a multi-oriented complexity that is merging into the entire world. In the meantime, new universes are given birth out of this dynamic, seemly chaotic and complicated process. These universes are highly personal, accurately context-related, constantly moving and developing like guerrilla forces and actively contributing to changing the outside world.

In Nice (Villa Arson) and SÃ¨te (Centre d'Art Contemporain), on the occasion of the year of France-Chine cultural exchanges, we are presenting some of the most significant Chinese artists under the banner â€“ reflecting to the multi-orientational nature of today's Chinese art â€“ 'A l'ouest du sud de l'est' and 'A l'est du sud de l'ouest'. These artists can be roughly divided into two groups: those living in China and those living in Europe, notably in France. However, as the title suggests, they are sharing commonly a way of living, and working â€“ travelling around the world, talking to everyone en route and embracing all the upcoming surprises. The double exhibition respectively happening in Nice and SÃ¨te will certainly be a memorable trace on their incessant trajectories.