An exhibition of current trends in contemporary art will showcase the works of the most influential international artists of the past decade and will attempt to articulate the most important recent artistic innovations. The works in the exhibition will be drawn from the Dakis Joannou Collection, one of the leading collections of new international art. 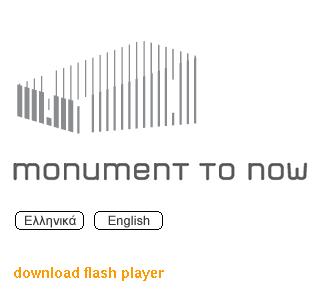 Monument to Now, an exhibition of current trends in contemporary art will showcase the works of the most influential international artists of the past decade and will attempt to articulate the most important recent artistic innovations. The works in the exhibition will be drawn from the Dakis Joannou Collection, one of the leading collections of new international art.

It has been a remarkably lively period in art since the Dakis Joannou Collection was last presented in the exhibition Everything That's Interesting Is New at The Factory in Athens in 1996. Art is now strongly engaged with contemporary life after many years of withdrawal into self-referential Conceptualism. The philosophic foundations of Conceptual Art still influence today's artistic approach, but artists are much more involved with humanistic issues and with popular culture. There is also a renewed interest in illusion, narrative, decoration and other artistic concerns that had been banished but doctrinaire Conceptualism. More than at any point in the past thirty years, art is again involved with a commentary on the human condition.

There is a growing dialogue between new art, fashion, music and design. There has been a renewed emphasis on creating strong, memorable images, which includes a revival of figurative painting and sculpture. There is also an increasingly sophisticated understanding about how art can use the mass media to expand its impact.

The Dakis Joannou Collection has been particularly active during the past several years and has added many major new works that reflect these trends. Alongside new acquisitions of important works by Robert Gober, Jeff Koons, Charles Ray, Christopher Wool, and other artists to whom the Dakis Joannou Collection has been committed since the 1980s, the exhibition will emphasize leading artists who have emerged since the last major presentation of the collection in 1996.

Acid Brass came about through a frenzied conversation in a pub one hot summer's night. The idea was simply for a brass band to play Acid House anthems. As The History of the World diagram (map) attempts to illustrate, the two musical forms have much in common, with obvious traces to folk music and political activism in each case. The UK's number one brass band, the Williams Fairey Stockport, were the first to perform the material in Liverpool (with Tony Wilson as Master of Ceremonies). Their arranger, Rodney Newton, did all the work transposing the scores.*

The performance will be recreated with the brass band of the Municipality of Athens, of one hundred and twenty members for the occasion of the Monument to Now preview.

Friday 18
Evening 8:00pm (by invitation only)
Private Viewing at the exhibition site in Nea Ionia, followed by a cocktail reception on the roof.

Saturday 19
Free morning to enjoy Athens.
Please consult the appropriate pages of our site.
Evening 9:30pm (by invitation only)
Buffet dinner reception to be confirmed

Shuttle service from hotels to be announced.
We will be updating you regularly with more details and contact information on different locations.
________