Ingrid Calame, Mathilde ter Heijne and Jorg Wagner, three young artists, whose complex and promising works have until now been seen in part by a larger German public only. Their medial and contextual methods are, however, too diverse, that a joint exhibition can be comfortably united under the singular label of a thematic show. 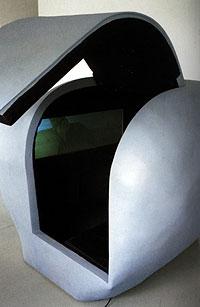 With Ingrid Calame (born 1965), Mathilde ter Heijne (born 1969) and JÃ¶rg Wagner (born 1967) the Kunstverein Hannover presents three young artists, whose complex and promising works have until now been seen in part by a larger German public only. Their medial and contextual methods are, however, too diverse, that a joint exhibition can be comfortably united under the singular label of a thematic show. It is nevertheless not our intention to present three separate solo exhibitions simultaneously, but rather to develop a kind of essay in the form of an exhibition, focusing on the correspondences and associative relationships between each of the three artists and their thematic central positions.

In spite of their differences, Ingrid Calame's paintings, which are equally figurative and autonomous, ter Heijne's performance-like, autobiographically charged installations, and Wagner's emotionally saturated projections, expose a high-voltage relationship of projection and investigation. The concurrences of interior and exterior, of visible and invisible and of hidden and revealed, produces a chamber music-like venture encompassing juxtaposition and cooperation, in which the works of each of these three artists posture themselves in constantly new relationships to others.

The paintings of Ingrid Calame, who was born in New York, and now lives and works in Los Angeles, are positioned in a shadowy zone between an abstraction that is devoid of reference and an eminent regard to reality and space. The surfaces of her paintings are made up of separate autonomous incidences of color. The brightly colored stains indicate gestures and chance as well as dynamics and composition simultaneously, and appear as if they were poured onto a canvas during an action painting performance, yet they are all clearly contoured and are set in a classical 'hard edge' manner.

The ambivalence, which can be equally felt in a small panel picture and in the monumental wall painting, can only be meaningfully resolved when the ostensible appearance of the surface is questioned. All of these flecks are indeed accidental gestures, but the places where they were first made as well as their initial intentions are as far removed from the visible image painted with enamels on aluminum as one could imagine. In a complex process, everyday stains found on the ground or on the streets are individually drawn with tracing paper and than reassembled to create new arrangements, only to be traced again and transferred to the surface of the painting.

This fascinating moment of transferal has dimensions that extend beyond space and format, especially when, like within the framework of the exhibition for the Kunstverein Hannover, the collected and rearranged stains are put together to form broad-scale constellations that take up entire walls and series of rooms.

The oeuvre of Mathilde ter Heijne, who was born in Strasbourg and now works in Berlin and Amsterdam, deals with projections and transferals between public and private spaces in a completely different way. On the dissolving boarders between social and biographical discourses, ter Heijne stages herself, or a dummy of herself, as a suicide murderer, whose violent acts are primarily directed at her own person. The installative Video and CD-ROM works are consciously placed in a political/terrorism context by including texts from various sources dealing with the phenomenon of suicide as a political weapon. The enormous emotional impact results, however, primarily from the complex amalgamation of guilt and desperation, of fanaticism and self-sacrifice, of egoism and ideology based primarily on an intimate, personal moment of appropriating and experiencing the personalities and philosophies of other persons.

This complex interaction of identity and projection is heightened in a very special way in a work that is entirely non-political on the surface. In it, she assumes the personality of fictional women artists of the last century by providing her dummies with a face and a voice. In different clothes and with a blank expression, ter Heijne stares into the gallery three times. From the inward looking, worried self-portraits seen reading passages from 'their' novels using ter Heijne's voice, a complex, emotionally intensified no-man's-land is created, in which we can expect the actual artist only as a multiple construction and as a multifaceted camouflage.

The paper rooms created by JÃ¶rg Wagner, who was born in Waiblingen and now lives in Cologne, are primarily projections in the true, formalistic sense of the term. Large sheets of photo paper cover the walls of an apparently normal, everyday room. After all the pieces of furniture are returned to their original positions, Wagner exposes the room and then removes the sheets of photo paper for development. The paper after-images of existing rooms are fragile tents, providing the interior spaces with a sculptural, exterior that remains an ephemeral and sensitive Platzhalter. Wagner's night blue shimmering puzzle between inside and outside perspicaciously transports the flat, non-spatial photographic image to the third dimension, revealing itself in a second step to be an emotionally occupied place that is biographical in the broadest sense of the term. Children's rooms and studio bunks thus become 'image worthy', like the dwelling of a distantly related opal prospector in the Australian outback.

The biography of this relative, who worked as an extra in the movie Mad Max, subsequently provides the basis for quite a few similarly biographically motivated enterprises. Individual road movie sequences are padded with the life of the distant uncle, and the tents mutate to amorphous one-man cinemas of his Mad Max adaptation that retain the subjective tension of the paper rooms.

Calame's, ter Heijne's und Wagner's intelligent and promising concepts are united in Hannover to form a discursive juxtaposition that is multifaceted in terms of aesthetics and contents, and yet still striking and sovereign in and of themselves. The comprehensive three-part catalogue documents each of the individual oeuvres separately, but also illustrates their multi-layered juxtapositions.

catalogue: more information about the catalogue