The forefront of the artistic debate and acknowledges the prevalence of religion and spirituality in contemporary art, culture and politics both in the United States and abroad. Whether or not one believes in God, whether we describe ourselves as theists, atheists or even anti-theists, we all live in a world that is profoundly influenced by concepts of God. 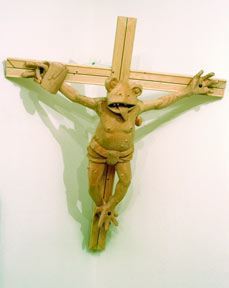 Whether or not one believes in God, whether we describe ourselves as theists, atheists or even anti-theists, we all live in a world that is profoundly influenced by concepts of God. 100 Artists See God, brings this topic to the forefront of the artistic debate and acknowledges the prevalence of religion and spirituality in contemporary art, culture and politics both in the United States and abroad.

Curated by artists John Baldessari and Meg Cranston and organized and circulated by Independent Curators International, New York, 100 Artists See God will travel through 2005 and be presented at museums across the United States.

The exhibition brings together 100 works by 100 artist who all explore different notions of God, spiritual power, and religion. The artists were invited by Baldessari and Cranston according to several criteria: either because they know and admire their work, or because the work possesses the sense of humor and audacity befitting such a project, or because these artists are, in the curators' words, "likely to surprise." Among those participating are well-known artists such as Eleanor Antin, Chris Burden, Rebecca Horn, Mike Kelley, Liz Larner, Louise Lawler, Tony Oursler, Paul Pfeiffer, Ed Ruscha, and Diana Thater, as well as many younger artists.

All 100 artists were asked to contribute a work to the exhibition that in some way deals with their concept of God. In some cases, the works are representative of the artists' own beliefs. In others, the works deal with faith as a subject, but do not necessarily reflect the doctrines to which the artists subscribe. In all cases, the artists have agreed to set themselves to a task that is both traditional and uncommon.

Religious imagery plays an important role in contemporary culture and even politics, and dominates the history of art. The work in 100 Artists See God continues in this tradition of faith-based art, but presents subjective interpretations of spirituality rather than conventional illustrations of established religious doctrines. Be they personal confessions or analytical assessments, depictions of what grounds or inspires, these works put forth a broad view of God and of religious practice.

CURATORS
John Baldessari is an internationally recognized artist who has also been a central figure in arts education. Currently a professor in the art department at UCLA, Baldessari was one of the original faculty members at the California Institute of the Arts where he taught for 30 years and made a major contribution to the success of that institution. Exhibitions of his work have been presented at numerous museums, including the Museo dÂ¹Arte Moderna Contemporanea di Trento e Rovereto, Italy, the Sprengel Museum, Hannover, Germany, the San Diego Museum of Contemporary Art, La Jolla, the Serpentine Gallery, London, the Museum of Contemporary Art, Los Angeles, the Whitney Museum of American Art, New York, and the Hirshhorn Museum and Sculpture Garden, Washington, D.C.

Meg Cranston is an artist whose work has been shown internationally. She is also a writer who has published articles and essays in numerous art magazines and museum publications. The former editor of "JOURNAL: A Contemporary Art Magazine," Cranston is a Professor at Otis College of Art and Design where she teaches both art criticism and studio practice. She has curated several exhibitions, among them Heterodoxy, exploring unorthodox artistic practices.

Baldessari and Cranston have collaborated on many other projects including exhibitions, artworks, and books. They most recently co-curated an exhibition titled An Interest In Life for Apex Art in New York in 2003.

Sunday, August 22, 11:00 a.m.
Meg Crantson
Artist and co-curator of 100 Artists See God will conduct a gallery talk on the development and organization of the exhibition as well as specific works of art.

Sunday, September 19, 1:00 p.m.
Jerry Burchfield
Artist, curator, author and educator organized and will lead a panel discussion focused on art and the environment.

Sunday, October 3, 11:00 a.m.
Reverend Ethan Acres
As an ordained, practicing preacher and a fine artist who has exhibited his work internationally, Reverend Acres is uniquely attuned to addressing how religion and entertainment are intertwined.

CONCURRENT EXHIBITIONS:
Ruben Ochoa and Marco Rios: Rigor Mortis
August 1-October 3, 2004, Lobby gallery
Sculptures that conflate coffins with custom-cars, inspired by the feeling that the car is more control of the person, rather than the other way around. Organized by Laguna Art Museum.

ABOUT THE MUSEUM
Continuing the tradition of the oldest cultural institution in Orange County (the Laguna Beach Art Association, founded 85 years ago in 1918), Laguna Art Museum's permanent collections and exhibitions feature historical, contemporary, and pop-culture-oriented American art, with emphasis on the art of California.

Laguna Art Museum is located at 307 Cliff Drive in Laguna Beach. The Museum is open daily, including Monday holidays, from 11:00 a.m. to 5:00 p.m. and is free to the public from 5 p.m. - 9 p.m. the first Thursday of every month. Admission to the Museum is $9 for adults and $7 for students and seniors Children under 12 are admitted free.