A selection of approximately 400 works from all artistic domains: painting, sculpture, photography and installations. The collection comprises around 2,000 works by ca. 150 artists. Focused primarily on the art of the last two decades of the 20th century, it is supplemented continuously by perspectives onto the 21st. While works by European and North American artists predominate, the collection is not restricted to western art, whether in terms of geography or of content 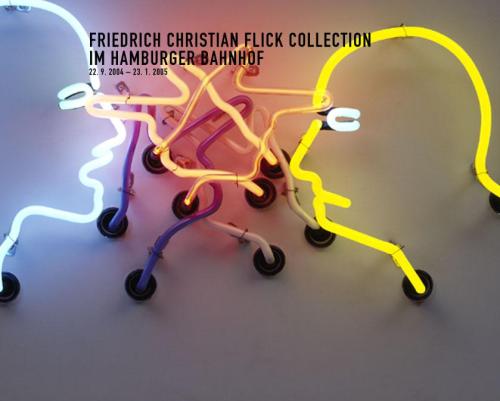 Beginning on September 22, 2004, the collection of Friedrich Christian Flick, which has yet to be displayed in its entirety, will be presented in the Hamburger Bahnhof in a large-scale premiere exhibition. The first presentation to be drawn from this comprehensive collection, and remaining on view until January 23, 2005, is a selection of approximately 400 works from all artistic domains: painting, sculpture, photography and installations. Covering more than 13.000 sq. m., this exhibition will fill galleries in the Hamburger Bahnhof itself, as well as those in the shipping halls, or so-called Rieckhallen.

Located adjacent to the main museum building, the halls will be connected to it by a bridge. Meanwhile, this first exhibition is only a prelude of things to come. Over the coming seven years, the entire collection will be presented to the public successively in rotating selections.

The collection belonging to Friedrich Christian Flick comprises around 2,000 works by ca. 150 artists. Focused primarily on the art of the last two decades of the 20th century, it is supplemented continuously by perspectives onto the 21st. While works by European and North American artists predominate, the collection is not restricted to western art, whether in terms of geography or of content.

Flick has pursued a stringent acquisitions idea, concentrating on assembling works by significant contemporary artists that lend directly expression to complicated temporal processes, and which incorporate diverse social themes. Viewed in art historical terms, this collector begins with three positions within classical Modernism, each documented by significant works: in painting, those of Francis Picabia; in sculpture, those of Alberto Giacometti; and in conceptual art, those of Marcel Duchamp. An additional ensemble of works surveys Conceptual Art, Minimalism, Fluxus, and the poetic Structuralism of the 1960s, the trends that together constituted the crucial caesurae in the development of art in the second half of the 20th century. Among others, artists such as Sol Lewitt, Lawrence Weiner, Robert Ryman, Marcel Broodthaers, Nam June Paik, Dieter Roth, Dan Graham and On Kawara might be mentioned. The medium of painting, whose point of departure in the Friedrich Christian Flick Collection is Francis Picabia, is represented principally by German perspectives, including Sigmar Polke, Gerhard Richter, Georg Baselitz, Blinky Palermo, but also by younger figures like Neo Rauch and Daniel Richter, and by the Belgian painter Luc Tuymans.

This stimulating constellation of positions, represented mainly by works that have in the meantime become exemplars of classical Modernism, also maintains an open attitude toward the following generation, including artists active in the past thirty years. The often large-format works span all artistic media, from drawing, prints, painting, sculptures, environmental works, photography, and video, all the way to film. In the area of photography, there are comprehensive work groups representing positions such as Renger-Patzsch, Walker Evans, Stieglitz, and Bauhaus photography. These constitute, so to speak, points of departure for contemporary approaches to photography, such as those of Bernd and Hilla Becher and their students, also represented in the collection, and also for conceptual photography by artists such as Vito Acconci, Dan Graham and Gordon Matta-Clark.

At the center of the collection stands one of the most important living artists, represented here by an incomparable ensemble of works that mirror impressively the core of his artistic thinking: the American Bruce Nauman. Other artists such as Paul McCarthy, Jason Rhoades, Rodney Graham, Fischli/Weiss and Stan Douglas are represented by space-filling, complex environments, accompanied by supplementary works as needed.

The overall character of the collection reveals unmistakably that it was conceived for a public presentation. Both the conception and the quality of the collection led to the collaboration with the Staatliche Museen zu Berlin, and finally to an ideal partnership with Berlinâ€™s Nationalgalerie.

Accompanying the exhibition will be a comprehensive ca. 500-page catalogue, specially designed to present all artists and works included in this initial showing. This ambitious publication project is being designed by cyan, the celebrated Berlin graphics firm, and will appear in two editions, both published by SMB-DuMont. A special collectorâ€™s edition features an elaborate layout and unusual materials and papers, which attempt to do justice to the varying approaches of the individual artists. A standard edition with the same design will be priced affordably for the average museum visitor.

At the opening, each visitor will receive a complimentary newspaper, also designed by cyan. At the heart of this publication will be a wide-ranging conversation between collector Friedrich Christian Flick and curator Eugen Blume, one touching on all facets of the extraordinary collaboration between Flick and the Museum fÃ¼r Gegenwart. Many of the questions that have been a continuous source of controversy in the German media up to the present will be dealt with in this dialogue.