Out of time. Long known for his work as an illustrator, Charley Case is now demonstrating his ability to master a number of forms of expression, from photography to video â€“ including ceramics â€“ using large formats in contrast with his other work, but without ever challenging his attraction to all that is Human, the basic element of his work. 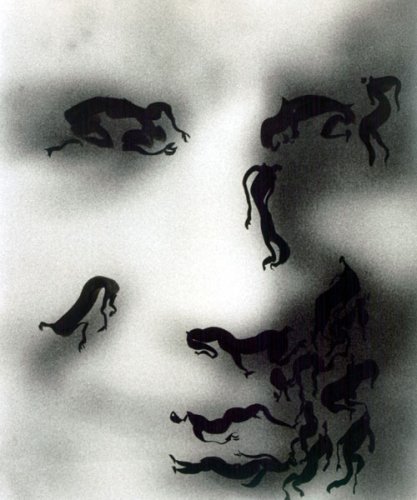 Long known for his work as an illustrator, Charley Case is now demonstrating his ability to master a number of forms of expression, from photography to video â€“ including ceramics â€“ using large formats in contrast with his other work, but without ever challenging his attraction to all that is Human, the basic element of his work.

At the beginning was the line. Not a straight line â€“ you will look for that in vain in the work of Charley Case â€“ but the curved line of the brush, creating forms endowed with a life of their own. A great admirer of Henri Michaux, the artist is fully aware of the link between his compositions and those of the writer. But where Michaux leaves the viewer the choice of identifying warriors in the â€œBattle of the Golden Spursâ€ (Belgian Royal Fine Arts Museums) from a profusion of ink blobs, Charley Case makes it quite clear: these are indeed human beings being represented, who are derisory in their anonymity, but without whom the work would simply not exist. Tormented shapes, they are bent on attacking the blank page, united by the same desire to affirm their presence, and quite decided about doing battle with the support which is harbouring them. Thus are the creatures produced by Charley Case, which seem to have been placed there by the artist but which very quickly go beyond their creatorâ€™s control. This impression is confirmed by a look at the very many books he has illustrated, where the drawings imbibe the space they occupy with an energy that is enhanced by the text. It is essential to match the texts with these illustrations in order to understand Charley Caseâ€™s approach: if he chooses to decorate a text on the history of Europe, it is in order to assert, through his drawings, his conviction that the individual plays a fundamental role in the construction of a society, even in the case of a new Tower of Babel. Just as any citizen is an indispensable cog in this process, Charley Caseâ€™s humanoid forms are the constituent elements of his work. By extension, humanity as a whole is a source of inspiration for him, and he regularly goes off to Africa, India and even Cuba to collect material for his work. Everything in his work is based on the circle, the symbol of unification, and on the spiral, the evocation of time and of the irreparable progression of life towards death. In the middle of the ocean, on a boat taking him to the Caribbean, the artist filmed the horizon using a super 8 camera, turning around 360Â°. The images from this sequence were then re-assembled in a big circle, the sculptural materialisation of a sense of the absolute, but also of abandon. This item, whose considerable size contrasts with the very small formats of certain drawings, is emblematic of the questioning that weaves its way through Charley Caseâ€™s work. Having arrived on dry land, he renewed contact with humankind, and the countless portraits he produced in all parts of the world constitute passports for communication with the other, which he releases for himself. Here, too, the material seems to take on a life of its own: the artist has gradually developed a specific technique, which is now full-blown, combining water and pigments on extremely light paper. Under the gaze â€“ at first sceptical, then dumbfounded â€“ of those being portrayed, the blobs combine to form a face and an expression. Elsewhere he works on photographed portraits to superimpose small characters who occupy the very recesses of the darkness.

Charley Caseâ€™s unlimited interest in humanity and in the relations between individuals takes on an additional dimension in his video work, which is inseparable from his graphic work. The latest production to date, â€œEntreâ€, is a compilation of seven short films, which the artist sometimes refers to as â€œchakrasâ€, more to underline their link with the concepts of â€œwheelâ€ and â€œvortexâ€ (translation of the Sanskrit term) than to confer on them any kind of mystical dimension. Their construction is based on the expression of the complementarity or opposition between groups or individuals. This approach culminates in â€œNemawashi CacahuÃ¨teâ€, for which the artist filmed friends or acquaintances vertically who were asked to take possession of the space in the hollow of a big â€œpeanutâ€ (â€œcacahuÃ¨teâ€) made from a synthetic material: the behaviour of each one â€“ from the adoption of the foetal position to the expression of union â€“ is emblematic of the relations between individuals which Charley Case is studying with respect to humanity as a whole. Elsewhere, both the technique used (splitting the screen into two) as well as the comments sometimes evoke a planetary Woodstock, as in â€œVolcano _ about the anti-capitalist carnivalâ€, which compares the views of a festive gathering of anti-globalists with those of the destruction of a McDonaldâ€™s during a demonstration. With a more original design, â€œOUT-I-M-Eâ€ is a film in the shape of a circle, devised to be projected on a round screen, in which the character is stuck in the spiral of time, before escaping. Death itself is convulsed with a loud, mad laugh, quite involuntary, but judiciously retained in the clip. Lastly, â€œAfter allâ€ expresses a return to unity, with three characters merging between light and darkness. Other â€œchakrasâ€ (â€œLouiseâ€, â€œSangamâ€ and â€œMan Walkingâ€) complete the film, â€œEntreâ€, Charley Caseâ€™s portrayal of the plurality of relations between the individual and the world: between them and us, between her and him, between I and me, between us, between life and death, between time, between light and darkness â€¦