Grizedale Arts presents a project that explores notions of Romanticism, over forty European and American artists will participate in the project. Romantic Detachment brings together road trips, films, performance, tea, hero-worship, discussions and music to explore the collisions and intersections between the ideals of European Romanticism and an alternative grass-roots Romanticism and to examine the dialogue between a Euro-centric tradition and a new world vision. The Perpetual Moment-Visions from within Okinawa and Korea: is a group exhibition composed of photographs of United States military bases that have been in existence since 1945 in territories of third-party nation states and the reality that surrounds them. A survey of paintings by Joan Wallace: from 1983 to 1990, he was part of the collaborative team Wallace & Donohue, which created work that is highly theatrical and self-aware, employing language, an absurdist sense of humor and various devices 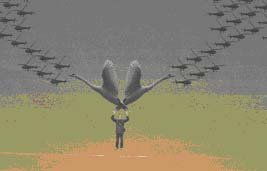 (Long Island City, NY, September, 2004) â€“ At P.S.1, Grizedale Arts presents a project that explores notions of Romanticism. Romantic Detachment places Grizedale Artâ€™s innovative and unique curatorial approach into the context of New York City through a number of context-specific commissions by European and American artists, and by establishing a production/live space in P.S.1â€™s second floor international project wing, which will be open to the public for three weeks.

Romantic Detachment brings together road trips, films, performance, tea, hero-worship, discussions and music to explore the collisions and intersections between the ideals of European Romanticism and an alternative grass-roots Romanticism and to examine the dialogue between a Euro-centric tradition and a new world vision. Romantic Detachment spans from Great Britainâ€™s Lake District to New York City, locations that, while they seem contradictory, both hold manifestations of these two Romantic ideals.

Grizedale Arts is based in the heart of the Lake District, an area with an established reputation as the birthplace of British romanticism. The radical thinking that established the Romantic Movement quickly gave way to a search for utopia and the idea of the landscape as an escapist paradise. The romantics established both the romantic ideal of the landscape and manâ€™s relationship to it and also the idea of the artist and the artistâ€™s role in relation to society.

Much contemporary art culture gazes beyond this traditional ideal of romanticism to an alternative romanticism defined by an exploration of culture operating outside the cannons of â€˜high artâ€™. This definition of romanticism can be found in Americaâ€™s history in the Wild West, in music culture, and folk traditions. This romanticism rejects the Euro centric ideals of high culture but keeps at its core a similar idea of the hero. Romantic Detachment aims to explore both of these positions as witnessed in New York City and the Lake District.

The production base for the exhibition, P.S.1â€™s international project wing, will be open to the public from October 16 to November 7, 2004. The three weeks of public activity will include live performances, interviews and activated installations, including an afternoon of live performance on Oct 23rd. For a full program of events see www.grizedale.org

Romantic Detachment is curated by Adam Sutherland and Sarah Glennie and is conceived in collaboration with The Henry Moore Foundation Contemporary Projects.

Grizedale Arts is a ground-breaking commissioning and residency agency based in Grizedale Forest in the Lake District of Great Britain. The programme supports both emergent and established artists in making new works that relate to the unique context of the Lake District and surrounding area. A key aim of the programme is to engage with local communities and events, integrating artistsâ€™ thinking and communication into mainstream and traditional activities. In recent years Grizedale Arts has developed a programme of annual events, which have, to date, launched artistâ€™s projects and provided artists the opportunities to extend their practice into new areas outside the gallery context. These projects include Grizedale Live, Grizedale Show, Roadshow and in summer 2003 a live wedding, need to be experienced live, they are interactive and often present existing community activities alongside the work of the commissioned artists. (http://www.grizedale.org)

(Long Island City, NY, September, 2004) - P.S.1 Contemporary Art Center presents a group exhibition composed of photographs of United States military bases that have been in existence since 1945 in territories of third-party nation states - Okinawa (designated as a part of Japanese territory) and on the Korean Peninsula (where the Korean nation is still divided) - and the reality that surrounds them. Questioning whether photographyâ€™s role of documenting facts persuades a viewer to truthfully consider the complex history that precedes the reality depicted in a photograph, the exhibition explores the difference between the decisive moment for photography and that of history. The Perpetual Moment also places documentary photography into the context of contemporary art, which devises ingenious ways to reveal the reality of our time and the truth of the here and now.

Because the raison dâ€™etre of documentary photography is rooted in fact, the practitionerâ€™s motive and motif are irreversible. Until recently many of the photographs published through the mass media machine, images which to a large extent are inseparable from a societal memory of the 20th Century, were taken by professionals who were removed from the places and people they depicted. In contrast, the â€œconcernedâ€ or â€œconscientiousâ€ photographers in this exhibition captured their own place and history from within, revealing through an insiderâ€™s perspective how one decisive moment persists over time.

These photographers document the present situation around the bases, and through these images the viewer is able to see the causality of history at workâ€”implicitly and irrevocably. Historically, the decisive moments were when the Allied Forces landed in Okinawa for a final lethal attack that killed 150,000 people, including non-combatant civilians; and when, in September of the same year, U.S. forces arrived on the Korean Peninsula through Inchon Harbor to liberate the Koreans from a 36-year-long Japanese colonial rule. Two of the many Koreans gathered to welcome the Americans were shot to death and ten were injured by Japanese policemen, apparently ordered by the U.S. military, which set the stage for continued tension on the Korean Peninsula.

American military bases have remained in the Okinawa Archipelago and the Korean Peninsula for almost 60 years now, creating complicated harmful effects on the lives of the locals and the environment. The citizens of these occupied areas have been living on the periphery of war for more than half a century, witnessing the persisting perpetual moment of history. These photographers, revealing the lives and suffering, as well as the joy and relief, of the local sovereign people, are aware that the causality that was triggered in 1945 persists as a socio-political reality.

This exhibition is organized by P.S.1 Adjunct Curator Kazue Kobata.

Support for this exhibition provided by "Friends of The Perpetual Moment-Visions from within Okinawa and Koreaâ€ (Okinawa, Osaka, Tokyo, Seoul, Paju, Daegu, Pyeongtaek, New York).

On October 24, between the hours of 4 and 5pm, there will be a performance of Okinawan traditional dance and music by members of the Okinawa American Association of New York (OAANY).

There will be a panel discussion on The Perpetual Moment-Visions from within Okinawa and Korea on Tuesday, October 19, 2004, 6pm - 9pm at the Teachers College Columbia University, 525 West 120th Street between Columbus and Amsterdam, (Room location will be posted at the main entrance to the college.) Please contact Peace Education Center, Teachers College, Box 171, Columbia University, New York, NY 10027, tel: (212) 678-8116 for more information. Free admission.

(Long Island City, NY, June, 2004) â€“ P.S.1 Contemporary Art Center presents a survey of paintings by Joan Wallace (b. 1959). Included in the exhibition are works made in the mid-to-late 1980s by the collaborative team of Wallace & Donohue, paintings by Wallace from the 1990s, including Formula II (Something Borrowed, Something Blue, 1992), which was part of Cady Noland's installation for Documenta IX in Kassel, Germany in 1992, and two new works produced especially for this exhibition. New works include Panic Table (2004), which turns a monochrome painting into a table replete with a pool ladder and an escape hatch/trap door, and Piece of Cake (For Jack Goldstein) (2004), a painting incorporating a short video movie, which is dedicated to the late, influential California conceptualist.

Wallace's work occupies a unique position among the currents that have animated art and engaged artists since the 1980s: appropriation, the "end" of painting, and the reinvestigation of Pop, Minimal, and Conceptual art. From 1983 to 1990, Wallace was part of the collaborative team Wallace & Donohue, which created work that is highly theatrical and self-aware, employing language, an absurdist sense of humor, and various devices â€” rotating and sliding panels, track lighting, a surveillance camera â€” to interrupt the otherwise passive act of looking. Wallace & Donohue began to author their work separately in 1988, and dissolved the partnership two years later. The paintings that Wallace made in the 1990s grew increasingly complex, deftly incorporating objects, video, and cultural and art historical references. After a seven year hiatus that included writing screenplays as well as a column on art, culture and film, Wallace returned to art-making in 2002.

This exhibition is organized by P.S.1 Curatorial Advisor Bob Nickas.