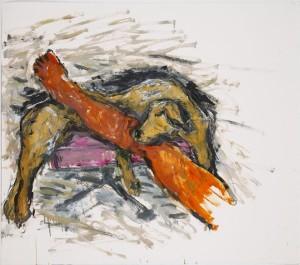 Sperone Westwater is pleased to announce a survey of drawings by Susan Rothenberg. The artistâ€™s seventh solo exhibition at the gallery will consist of over 70 drawings spanning 30 years of work, many of which have not been documented or shown before. Beginning with the celebrated horse drawings of 1974, the exhibition will chart the historical development of Rothenbergâ€™s work, including her figures in motion, her experiments with color, and her continuing exploration of the human form.

Although Susan Rothenbergâ€™s drawings have always been included in her retrospective exhibitions, the role of drawing in her work is of such fundamental importance that it seemed a valuable exercise to dedicate a show entirely to this aspect of her art. According to Michael Auping, ''[Rothenbergâ€™s] approach in constructing an image is dominantly graphic.'' Her works on both paper and canvas are characterized by an immediate, insistent graphic style: with charcoal, graphite, pencil, tempera, and crayon, she works, reworks, smudges, erases, and adds, creating in turn a working dialogue that is simultaneously deliberate and intuitive. Auping writes, ''As [Rothenberg] draws, she figuratively and literally allows herself to be drawn into a strong psychological or metaphorical image.''

Indeed, drawings appeal to Rothenberg because they ''donâ€™t demand a full resolution. They give me a place to explore conception, composition, relationships.'' And as autonomous creations which stand alone, her drawings should not be seen simply as studies for her paintings: ''Drawings are sometimes prefaces to paintings, and sometimes a relaxation from them. They can be tests of new images or variations on work in progress. It doesnâ€™t work for me to use a drawing as a model for a painting â€“ the canvas relates only to itself.'' In 1988, the artist said, ''Iâ€™m finding myself much freer in drawing, and making much broader gestures, than Iâ€™m able yet to do with paint. So drawing is becoming a learning instrument rather than something I do if I donâ€™t want to paint. Iâ€™m learning more from drawing now than I am from painting.''

Born in 1945 in Buffalo, New York, Rothenberg currently lives in New Mexico. Since her first solo exhibition at 112 Greene Street Gallery in 1975, Rothenberg has had numerous solo exhibitions and her work has been exhibited extensively throughout the United States and abroad. Recent important exhibitions include a retrospective at the Albright-Knox Art Gallery in Buffalo, New York that traveled to Washington, D.C., St. Louis, Chicago, and Seattle (1992), a retrospective at the Museo de Arte ContemporÃ¡neo in Monterrey, Mexico (1996), an exhibition of paintings from the nineties at The Museum of Fine Arts, Boston (1999), and a group exhibition ''Jasper Johns to Jeff Koons: Four Decades of Art From the Broad Collection'' at the Los Angeles County Museum of Art (2001). Most recently, the artistâ€™s work was included in ''Disparities & Deformations: Our Grotesque,'' The Fifth International Site Santa Fe Biennial, 2004.

A catalogue with color reproductions and an essay by Robert Storr, Rosalie Solow Professor of Modern Art at the Institute of Fine Arts, New York University, accompanies the exhibition. The publication also includes several vintage photographs of the artist in her studio as well as a chronology.

For more information as well as photographic images, please contact Molly Epstein at Sperone Westwater at 212 999 7337