The exhibition surveys the rich history and aesthetics of assemblage and collage from 1920 to 2002. Arranged in loose chronological order, the exhibition features important examples from the Museum's permanent collection by some of the most central figures over the last century. 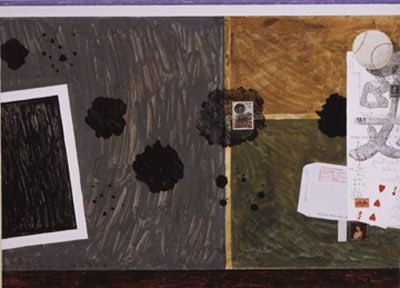 As suggested by the title, Lost but Found explores the myriad ways artists take commonplace, often discarded objects and materials and transform them into art. These works are largely assembled rather than painted, drawn or carved, and they are constructed either entirely or in part from nontraditional art materials. The exhibition surveys the rich history and aesthetics of assemblage and collage from 1920 to 2002. Arranged in loose chronological order, Lost but Found features important examples from the MuseumÂ¹s permanent collection by some of the most central figures working in collage and assemblage over the last century.

French artist Jean Dubuffet coined the term 'assemblage' in 1953, but the traditions of using found objects in art and collage can be traced to the first decades of the 20th century. The birth of modern collage occurred in 1912 when Cubist artist Pablo Picasso incorporated a fragment of oilcloth in a painting to simulate chair-caning and surrounded the piece with hemp rope. The integration of non-traditional materials in a work of art was at first a radical act defying convention, but it was only a matter of time before other artists adopted collage as a vital new means for expression. Collage was taken a step further when artists began assembling three dimensional collages or 'assemblages.' The tradition of assemblage advanced with the avant-garde artists of the 1950s and continues its evolution to the present.

The exhibition begins with a look at early collages from the 1920s and 1930s by Kurt Schwitters (1887-1948), Paul Klee (1879-1940) and Pablo Picasso (1881-1973). On display are a number of examples from Schwitters' famous series of collages titled Merz, which incorporate items from every day life including train tickets, newspaper fragments and candy wrappers. Also on view from this period is Klee's noted collage Idol for House Cats (1924) and two versions of Picasso's 1932 collage titled The Diver (Marie-TherÃ©se).

The Norton Simon Museum is known around the world as one of the most remarkable private art collections ever assembled. The Museum features a particularly celebrated Impressionist, Post-Impressionist and 20th century collection. Complementing the Western art is an outstanding collection of Asian sculpture from India and Southeast Asia spanning a period of 2000 years.

The Norton Simon Museum is located in Pasadena on the corner of Orange Grove and Colorado Boulevards at the intersection of the Foothill (210) and Ventura (134) freeways. The Museum is open every day except Tuesday, from noon to 6:00 p.m., and noon to 9:00 p.m. on Friday. Admission is $6.00 for adults and $3.00 for seniors. Members, students with I.D. and patrons ages 18 and under are admitted free of charge. The first Friday of every month from 6:00 to 9:00 p.m. is free for all visitors. The Museum is wheelchair accessible. Free parking is available and no reservations are necessary. For Museum information, please call (626) 449-6840 or visit