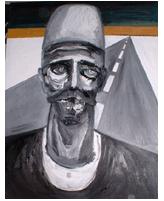 The story of this exhibition was one that began almost two years ago. It was inspired by a series of relationships and coincidences observed between the work of these six artists and in connection to the idea 'Love Story'. The context of the particular space at Danielle Arnaud contemporary art with its intimate setting was central. Much more recently the following was written, almost as a ruse.

â€œEach artist has been asked to select a piece of writing which may function as a love story to them, and to make new work which is sourced by their relationship to this piece of text. In the exhibition the selected texts will be available but kept autonomous in terms of which artist selected which text.â€

Here follows extracts from the responses to date:

1. "The Anatomy of an Amorous Consumption" describes love as a â€˜Bastardâ€™ or â€˜Improperâ€™ form of consumption which devours the flesh and humours; Love as a physical disease.

2. Between the remaining grey paint faded by time, and the wood greyed by the action of humidity, appear tiny areas of reddish brown - the natural colour of the wood - where the wood has been left exposed by the recent flaking off of new scales of paint. Inside her bedroom, A... Is standing in front of the window and looking out between one of the chinks in the blinds. The man is still motionless, leaning towards the muddy water, on the earth-covered log bridge. He has not moved an inch: crouching, head down, forearms resting on his thighs, hands hanging between his knees. He seems to be looking at something at the bottom of the little stream - an animal, a reflection, a lost object.

4. There is a painting in the Thyssen collection in Madrid by Petrus Christus called The Virgin of the Dry Tree. The virgin and child stand in a leafless tree, the formation of the wreath-like branches anticipating that of the crown of thorns. From the branches of the tree hang more than a dozen golden letters, and each of the letters is an a: an A for an Ave Maria.


Phyllida Barlow will be showing a two-sculpture work; one sculpture will be wall based, the other will be free standing, but they will relate to each other. These will reference familiar things but defy their naming.

Mark Dean will be showing a new video and sound work exploring relationships between mechanism and meaning. Satellite (44100:50=882) takes the line "I Love You" from the Sex Pistols song 'Satellite' and stretches it out by a factor of 882. This number is the combined ratio of the frequencies of digital audio (44100 hz) and video (50hz). The resulting audio track accompanies video of the exchange between the Creature and Maria in James Whale's 'Frankenstein', slowed by the same factor. Alternate fields of the video frames are blank; when the same signal is played on projector and monitor, their different technologies are revealed by the flicker of the monitor screen.

Lucy Gunning will show a video an a sculptural work made specifically for the exhibition and space at Danielle Arnaud contemporary art.

Oona Grimes' 'Love Story 2004' will be a non linear narrative set in a period of social crisis, pestilence, fires and civil war. It is a world reminiscent of 11th century Japan as in Kurosawa's "Rashomon" [1950] where disease has escaped the body so that all memory and truth are distorted by the consuming passions of the characters.

In Roxy Walsh's drawings there are things like these letters, things that are at the beginning of meaning, that solidify meaning in conjunctions and accumulations and shift and shuffle in company. Like letters they are partisan and fickle, saying one thing now and the opposite when your back is turned. Like letters they are persistent and not without noise.

Erika Winstone will be showing a series of drawings drilled into whitewashed paintings. A selection of the source for these drawings - video footage of performances of love songs in the home by her seven year old daughter - will also be shown. The work accumulates many layers of interpretation of a spontaneous playful moment. The artist will present a silverpoint wall drawing inspired by archival footage of a performance by her father.