Hugo Bastidas: In-deux-cative. The works in the exhibition are ironical, funny and intelligent. Bastidas' wry sense of humor and ability to poke fun at human beings and their flaws is noble and humbling. Common people, common past: by Valerie Hird. The show will consist of 14 works including paintings and illuminated drawings. 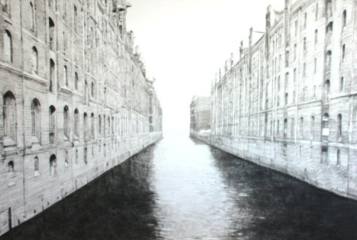 The Nohra Haime Gallery is pleased to present â€œin-deux-cativeâ€, Hugo Bastidasâ€™ latest work. The exhibition will be on view from November 17th â€“ December 24th, 2004. The seven paintings in In-deux-cative show the beauty and majesty of the natural world, while showing the danger of human encroachment with a touch of irony to turn the corners of your mouth upward.

In So Far, Bastidas paints a beautiful picture of a canyon river. The water stretches forever, flowing through cavernous cliffs on either side. The canyon walls are not rock, instead Bastidas replaces them with the facades of buildings. The thought of what a wonderful place to live is combined with the question of how to leave once you are there. In The Catch, a seemingly picturesque scene of fishermen unloading their nets on the beach, is in reality a foreboding of hard times ahead. The nets are empty and in the background loom high-rise buildings that have left their mark not only on the horizon but also on the non-existent fish population.

Coup is an image of a soldier storming a museum during an uprising. The pictures hang calmly and serenely on the walls as the soldier nervously points his rifle around the room. His only foe is a statue on her pedestal standing with hands above her head in a state of surrender. In Water Front Access, two young girls are seemingly collecting water from a river, but as it turns out they have shirked their duties and have gone for a swim and are putting their robes back on over their swimsuits.

The works in the exhibition are ironical, funny and intelligent. Bastidasâ€™ wry sense of humor and ability to poke fun at human beings and their flaws is noble and humbling. He forces us to take a look in the mirror and realize that life should not be taken too seriously and to live a little while appreciating what we have.
_____________________________

The exhibition will consist of 14 works including paintings, paintings on paper and illuminated drawings.

In COMMON PEOPLE, COMMON PAST, Hird deals with the interconnectedness of people, in particular the common man. Focusing on Medieval Spain, she juxtaposes the old and the new, combining historical and contemporary contexts. The three religions that have had a great presence in Spain, are represented through symbols that unite them. Through the use of Christian, Jewish and Muslim motifs, Hird pushes the ironies and ambiguities of man and shows us that their plights are the same.

In THE LAST SUPPER, Hird depicts a modern, revised version of the scene. Starting with Da Vinciâ€™s windows, she includes both genders as well as children in her work. While making this scene quite inviting, she reminds us that we are all part of the same, and we are all responsible for each other. In yet another fascinating work, LYSISTRATA, Hird gives us again an updated version of the scene in which women of all faiths gather together to stop war.

BORDER PEOPLE and UNEASY PIECE are an overlap between Hirdâ€™s old landscapes interwoven into fabrics. She now uses gold leaf in these works as well as adds the human figure, seducing us visually, and at the same time reminding us how people have to live with the choices made by politicians.

Hird has exhibited widely in the United States and abroad. She recently published a limited edition book titled SHARED VISIONS/CONTESTED HISTORIES. The book is taken from a 24 foot watercolor she produced in 2003. It is formatted as a timeline but lacks linear context. Contemporary images from her years of travel in Spain are spiced with a variety of religious and historic iconography. She took images from Spanish Medieval texts â€“ both Catholic and Sephardic along with Islamic miniatures from the same period to illustrate both the struggle for dominance and the shared symbolism that resulted from overlapping religious and cultural influences. An exhibition of this watercolor will begin traveling in 2005.