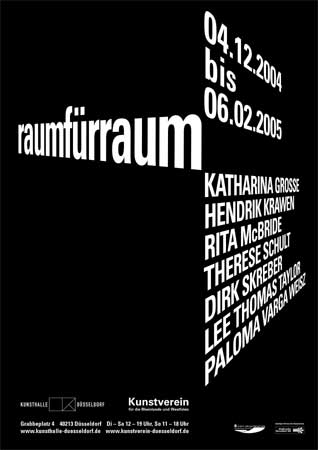 In recent decades the Kunsthalle DÃ¼sseldorf and the Kunstverein fÃ¼r die Rheinlande und Westfalen have provided a fruitful impetus for the development of contemporary art at local, nationwide and international level. United under one roof, both institutions perceive this first group show since the refurbishment of the building (2001/02) as a continuation of the practice initiated in the 1970s, which featured their co-presentation of current positions in contemporary art in DÃ¼sseldorf.

The joint exhibition comprises seven artists of differing ages either well-established or as yet relatively unknown who have been invited to ÂªoccupyÂ´ the building and integrate its architectural features into their artistic interventions. The choice of artists unifies individual positions which converge with the location using diverse media in a variety of ways and engage with questions regarding both the meaning of space and the approach to space within the existing architecture. All of the participating artists have a connection with DÃ¼sseldorf, having either studied at the Academy or by virtue of their living or teaching here.

Rita McBride born in America and Professor at the Kunstakademie DÃ¼sseldorf since 2003 expands the buildingâ€™s architecture with a honeycomb-like sculpture, whose organic and geometric forms nestle against the concrete of the existing architectural contours of the exhibition room. Dirk Skreber winner of the German National Galleryâ€™s Young Artists Prize in 2000 has designed a spatial scenario, which builds upon the situational threat residing in his paintings. This installation makes the visitor feel both uneasy and insecure and in so doing, directly manipulates both his/her eye and situational awareness. Katharina Grosse utilizes the existing architecture as the foundation for her large-scale aerosol works, transforming the spatial limitations into a iridescent tableau. At the same time the given space and its dimensions coalesce with the sprayed surface. The sculptress Paloma Varga Weisz has installed a sculptural ensemble, the centre-piece of which comprising a figure suspended from the ceiling. Handcrafted wooded sculptures and benches are reminiscent of richly adorned choir pews and also provide a reference to the brutal architecture of the Kunsthalle. The young painter Therese Schult will arrange paintings on canvas and paper behind a painted silk curtain and will use light to set the scene. The final constellation for this stage-like situation will be based on Âªoracular decisionsÂ´ made on the opening evening. Hendrik Krawen paints frame-filling faÃ§ades or irritating landscape backdrops characterized by an original use of colour and which combine abstract monochromism with intricate detail. The painter juxtaposes his poetic and artistic reinterpretation of architecture and landscape with the actual edifices of the buildings opposite the Seitenlichtsaal in the Neustrasse. Lee Thomas Taylor currently a research fellow at the Kunststiftung in Amsterdam will install diverse sculptures both in the exhibition rooms and outside on the Grabbeplatz concourse. His interventions and sculptures are the interim results of a perpetually changing transformation of materials, function and meaning.

A catalogue documenting the exhibition will be published in January 2005.