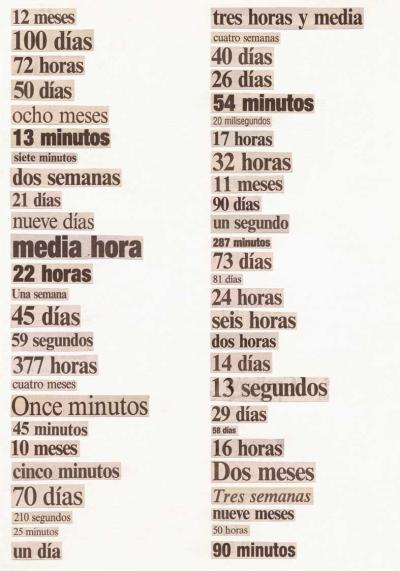 The elba benÃ­tez galerÃ­a opens the new season with the exhibition "Un aÃ±o" (A Year) by Ignasi AballÃ­ (Barcelona, 1958). Since his first exhibition at the GalerÃ­a Elba BenÃ­tez in 1990, Ignasi AballÃ­ has continued to apply his diligent work method: usually consisting of gathering, storing and classifying materials that he subsequently employs in his works. These materials include newspaper clippings and fabric off-cuts, as well as natural phenomena, such as the marks left by the sun on cardboard, by footprints on a wall and by dust. AballÃ­'s work invites us to reflect about the creative process and about the integration of the everyday into art. He projects painting beyond the conventional confines of the canvas and the pictureframe, and presents us with the quantification of the flow of time and the aterialization of its physical consequences.

The three separate works in the exhibition "Un aÃ±o" pose three different approaches to spatial time: public time, neutral time and private time. "Three depictions, three attempts to detain and fix something as intangible and indefinable as time and its unstoppable flow." (1)

"Calendario 2003 (Diario)" [Calender 2003 (Daily)], a set of twelve panels featuring the pictures that were published on the front page of the newspaper read by the artist every day in the year 2003. The pictures depict events around the world (public time) in a year, from the most global aspects to very local ones too. In the panels, each one of which corresponds
to one month of the year, the pictures have been arranged chronologically as in a calendar, the days of the month being substituted by the "Picture of the day".

The piece "Listados (Tiempo-un aÃ±o)" [Lists (Time-a year)], is related to AballÃ­'s series "Listados" (Lists) which he has made over the last five years and for which he collected, classified and arranged snippets of news that printed different figures: amounts of people, victims, injured, losses, percentages, money, time, violence... "Listados (Tiempo-un aÃ±o)", has a similar basic structure, employing newspaper clippings, but on this occasion they are used in a way unlike that of "Calendario 2003": this time the cuttings are taken from news features that mention a span of time and are extracted from several different papers. Every span of time possible in a year (from twelve months to a second) appears in this diptych. These time spans that relate to real situations are taken out of context (the news) and transformed into simple and neutral temporal intervals. "On this occasion time can be named, translated into words and numbers". (2)

The third piece, "Un aÃ±o" [A year ], deals with private time. Once again, AballÃ­ relates a recent work with an earlier series, Errores, in which he depicted balls of crumpled-up newspaper the outcome of the errors made by the artist during the creative process. "Un aÃ±o" shows 365 balls of crumpled-up paper of each of the 365 pages of a calendar. All that remains discernable in these balls are a few fragments of incomplete texts, evoking the day of the week, a month... In this manner, AballÃ­ offers the image of a year, one that implies the daily ritual of tearing off, crumpling-up and throwing away a piece of time that already belongs to the past. In both cases these works explore the difficulty of meeting objectives and recognize error as an inelludible part of the work process.

IgnasÃ­ AballÃ­ has recently displayed his work in a number of solo shows: "Nada-para-ver" (2004), at the Museo de Bellas Artes in Santander, "Desapariciones" (2003), at the GalerÃ­a Estrany de la Mota and "Desapariciones" (2002) at the Espacio Uno venue at the MNCARS. In 2004, he has taken part in a variety of group exhibitions: "Looking further, Thinking Through", Reykjavik
Art Museum-Kjarvalsstadir, "El Laocoonte devorado. Arte. PolÃ­tica. Violencia". ARTIUM, Vitoria-Gasteiz, "Espaces Fragiles", Dijonval, Sedan and at the Pontevedra Bienial. His upcoming projects include solo exhibitions at the MACBA in Barcelona (2005), at the Museo Serralves in Oporto (2006) and the Ikon Gallery, Birmingham (2006)

Other activities: ArtBaselMiamiBeach, from 2nd to 5th of December 2004. Stand N20