The Superfly Effect. The influence of street style, urban culture and the mass media are all explored in this exhibition. In 1972, Gordon Parks Jr. directed Superfly, a film that takes place in Harlem. Part of the film features the reflection of the city's streets as seen through the shiny surface of a Cadillac's front grill. This reflective element is the seed of inspiration for the show with the works of 18 artists. Urban Image, a collective of media artists, features short non-fiction works 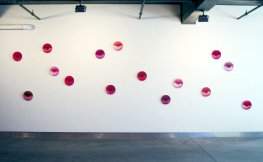 The December 2004 issue of Artforum was devoted entirely to the continuing influence of Pop Art in contemporary art. Critics assessed the state of contemporary art produced by young, emerging artists, well-known artists and collectives, in order to explore the role of popular culture, and the artistsâ€™ interest in creating imagery influenced by the look of the mass media. These ideas are also at the heart of the superfly effect. Considering the full spectrum of the urban environment as a highly influential set of images, the superfly effect explores how what is seen in our city streetsâ€”from advertisements to neon signage to the decorative objects on our fellow passersbyâ€”influence the creative ideas of contemporary artists. Animated video images are contrasted with comic-book pages, glitter paintings and photographs of the urban and fabulous. Join us for contemplation of how popular culture from streets, like those in Jersey City, becomes a defining element in visual art.

URBAN IMAGE is a collective of media artists based at New Jersey City Universityâ€™s Media Arts Department. URBAN IMAGE features short non-fiction works produced and directed by current media majors and alumni of the Media Arts Department in a series called A Sense of Place. The artists included in the exhibition present a wide spectrum of cultural and artistic sensibilities. Locations ranging from a residential street in Jersey City, to busy Bergenline Avenue, to a meditative bookstore in Hoboken were chosen by the artists for their documentary productions.

The founding members of URBAN IMAGE include Ignacio Guzman, Maggie Menjivar, Carlos Orrego, and Jane Steuerwald. Guzman, Manjivar and Orrego are seniors in the Media Arts Department of NJ City University, and are accomplished video producers. The three have designed and produced all publicity materials and have organized this program in collaboration with their professor, Jane Steuerwald.