Buried Treasure. During a residency in Los Angeles, Shinoda constructed a trailer based on an engawa, the traditional viewing platform that separates architecture, or the domestic space, from the garden, or enchanted space. With his engawa hitched to a 1987 Ford Ranger, the artist traveled to the Navajo Nation, up the Pacific coast past Big Sur, and east to Yosemite National Park. The artist considers how the existing landscape might direct man's relationship to nature in the future. 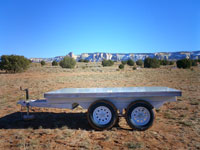 The work of Taro Shinoda often engages themes of science, adaptation, and desire. During a three-month residency in Los Angeles, Shinoda constructed a trailer based on an engawa, the traditional viewing platform that separates architecture, or the domestic space, from the garden, or enchanted space. A manmade attempt to represent the universe through an ideal landscape, the traditional Japanese garden is a recurring theme in Shinoda's work. With his engawa hitched to a 1987 Ford Ranger, the artist traveled to the Navajo Nation, up the Pacific coast past Big Sur, and east to Yosemite National Park. Taking his mobile engawa into the landscape of the American west, the artist considers how the existing landscape might direct man's relationship to nature in the future. For Buried Treasure, the artist presents the mobile engawa as a place for visitors to sit and meditate on their place in the universe. On the entrance wall, his travel notes discuss his experiences on the road. A catalogue featuring writing by Mori Art Museum curator Mami Kataoka and Gallery at REDCAT director and curator Eungie Joo will be available in mid-March.

The focal point of Shinoda's gallery installation will play off the engawa, a traditional wooden platform that separates domestic space from a Zen rock garden. This viewing platform is used for mediation and contemplation. The engawa symbolizes the border between the real world and the imaginary space of a garden. While the Zen garden symbolically depicts the ideal universe, the artist's goal is to contemplate nature rather than man-made environments. Shinoda is constructing a mobile version of the engawa for his project that he will travel to scenic and spiritually resonant locations in California.

"I am looking for a perfect landscape," says Shinoda, "and also exploring the meaning of the word perfect."

In the months preceding his installation, the artist will enlist the advice of local residents to direct him to significant locations. He will travel with companions who know and understand the spiritual implications and narrative background of an area. Once he finds these powerful landscapes, he will meditate and observe them from the platform.

The artist will also keep a diaristic record of his experiences and explorations. This material will be incorporated into his installation at REDCAT.

Shinoda believes that contemporary people see nature through the lens of their own needs and have disrespected our necessary relationship to it in favor of economic efficiency. Through his experiences and meditative practice, he hopes to allow the land to suggest the relationship it requires from man.

"We have lots of things to learn from nature," he says, "100 years ago no one believed that atomic power existed. My work may sound superstitious, but maybe in 100 years we will see it as the beginning of a new system."

Buried Treasure is part of an on-going investigation in which Shinoda creates situations that allow him to explore his relationship to nature. For the exhibition Under Construction, the artist consulted with a Korean shaman in Seoul to locate a perfect location from which to view nature. The advice he gathers from individuals and communities in different localities links his work to the social realm.

In the past four years, Shinoda has participated in a number of international exhibitions such as Time After Time: Asia and Our Moment at Yerba Buena Center for the Arts in San Francisco, Centre of Attraction: 8th Baltic Triennial of Iinternational Art, 2001 Yokohama Triennial, Under Construction: New Dimensions in Contemporary Asian Art in Seoul, Beijing, and Tokyo as well as other major group exhibitions at the National Gallery Victoria, Melbourne; Mori Art Museum, Tokyo; Art Tower Mito; Tokyo Opera City Gallery; and the Hiroshima National Museum. Shinoda lives and works in Tokyo.

This exhibition is made possible by the generous support of the American Center Foundation, Eve Steele and Peter Gelles, and The Andy Warhol Foundation for Visual Arts. Additional support is provided by Shiseido Co., Ltd. and The Japan Foundation, Los Angeles, Discover Signs, and R-23. The artist's Los Angeles residency is funded by the Asian Cultural Council.