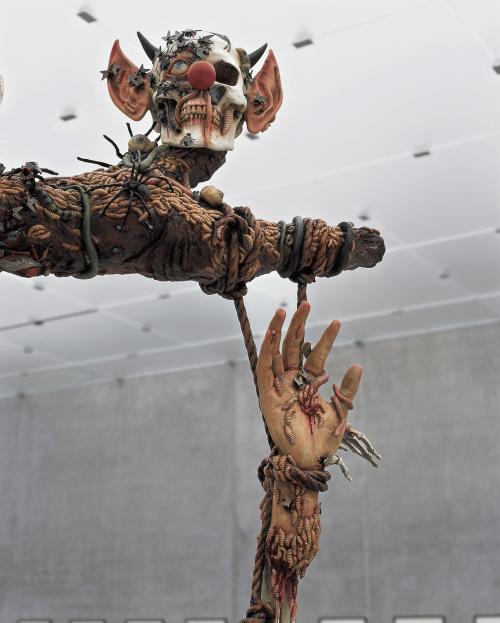 Jake and Dinos Chapman (*1966 in Cheltenham, *1962 in London; live and work in London) are among the leading representatives of contemporary British Art. They had a solo exhibition at the Institute of Modern Art in London in 1996, and they took part in the legendary exhibition "Sensation" in 1997, to mention just two shows. In 2003, they were short-listed for the prestigious Turner Prize. They announced their intention of working together in November 1992 with their anti-aesthetic manifesto "We are Artists" stencilled on a wall of the Institute of Contemporary Arts in London.

The Chapman brothers are always pushing borders and challenging taboos in their work. Aggressively and with the blackest humour and most subversive wit, they examine subjects like violence, war, the Holocaust, genetic engineering, and death with all the barbarity that goes with them. Even if their work may at first glance seem in-your-face, scandalous, and controversial, there is a concept with a definite philosophical claim behind their art. "We work analytically rather than critically. We arenâ€™t trying to solve genetic engineering problems when we deal with the subject of cloning using child mannequins fused together and covered with primary sexual organs." (Jake Chapman in an interview with Holger Liebs, SÃ¼ddeutsche Zeitung, 5/6 April 2003) What they are aiming at, rather, in their own words is producing "moral panic."

Like many artists of their generation, Jake and Dinos Chapman allude to historical art in their work. Since the beginning of their artistic career, they have always dealt with the work of the Spanish painter Francisco de Goya (1746â€“1828). Their examination of Goyaâ€™s "Los Desastres de la Guerra" (Disasters of War, 1810â€“1820) has been a constant theme of their work for more than a decade. In his series, which comprises 80 works in aquatint, Goya, reflecting on the Napoleonic invasion of Spain in 1811â€“1812, created one of the most extreme depictions of barbarian cruelty in graphic arts. While plates 2â€“47 of the "Disasters of War" are devoted to the War in Spain, a second group of etchings (48â€“64) focuses on the famine in Madrid from 1811â€“1812. Finally, plates 65â€“80 deal with the repression under King Ferdinand VII.

The Chapman brothers acquired a complete set of this series from the Goya Foundation; it was printed in 1937 using the original plates. They doctored these as they saw fit, magnifying the brutality of the etchings by caricaturing some of the figures with distorted grimaces. "What we were interested in was how and whether we are allowed or able to show moral views." (Dinos Chapman in an interview with Holger Liebs, SÃ¼ddeutsche Zeitung, 5/6 April 2003) "Insult to Injury" was the title they gave the paintings they reworked in 2003. Animal heads and clown masks replaced the faces of the martyrs. The artistsâ€™ interventions are aimed at making the message in Goyaâ€™s plates ("Goya reworked and improved") more caustic and at provokingly exploring the aesthetic relation between beauty and death. The shocking effect of the works triggered strong reactions at their presentation in Oxford in the spring of 2003. "The altered prints make you think a serial killer with an addiction to drawing psychotic clown faces has got into the British Museumâ€™s prints and drawings room," the British art critic Jonathan Jones described his first impression of the series. By remaking the etchings, the Chapmans broke the taboo of the inviolable original. The work is not directed against Goya, of course, but meant to transform the "Disasters of War," to place it in a current context, and develop a new aesthetic perception.

The Chapman brothers rose to international prominence with their work "Great Deeds Against the Dead" (1994) that quotes the eponymous plate from Goyaâ€™s series "Disasters of War" using life-size mannequins. In contrast to Goyaâ€™s solemn rendering of the massacre, the three castrated soldiers in Jake and Dinos Chapman's sculpture are tied to the tree in an ironic evocation of beauty and perversion. The child-mannequin-type figures of the sculpture "Zygotic acceleration, biogenetic, de-sublimated libidinal model (enlarged x 1000)," 1995, are also removed from biological reality, and yet the body with its multiple girl heads, legs, and arms conveys the impression of a living creature. They are mutated organisms â€“ fused together at their torsi; anus, vulva or penis replace nose, ears, or mouth â€“ who seem to offer themselves sexually to the viewer. The theme of the work is, if one sticks to the title, cell reproduction and sexuality. A work that captures the self-reproductive manifestations of excessive, errant libido and reveals the obsessions of genetic engineering.

In 1993, the artists used miniature figures to recreate all 80 of Goyaâ€™s plates in their work "Disasters of War." Each scene was reconstructed meticulously using hand-painted figures, thus depicting the entire gamut of human inventiveness in agony, torture, and murder. This series already anticipated their major work "Hell" (1999â€“2000), which portrays an apocalyptic vision of hell on Earth as war, Nazi atrocities, concentration camps, and mass executions with thousands of miniature figures taken apart and put together again.

A symbol of our global age is the American fast food chain McDonaldâ€™s, which has infiltrated the most remote corners of the world. Under the title "The Chapman Family Collection" (2002), the Chapman brothers have created wooden sculptures inspired by African masks and fetish objects, parodying or unearthing the hypocrisies in displaying ethnographic art by integrating McDonaldâ€™s symbols. Which goes to show that everything can be imitated. There is no dividing line between the reproduction and the original in a reproducible world.

With their bronze sculptures under the title "Sex" (2003), the Chapman brothers make a jump in time. They show the decomposed corpses from "Great Deeds Against the Dead" (1994). The bodies are swarming with flies, maggots, worms, and all sorts of creatures which have picked their bones clean. At first glance, everything seems naturalistic. It isnâ€™t until one examines the work more closely and talks to the artists that one realizes the flies and worms were originally cheap plastic reproductions from toy stores and novelty shops. These were cast in bronze and hand-painted by the artists. Naturalism becomes a travesty, but it still sends goose bumps up your spine and is put into perspective through the use of elements from the horror genre and black humour: the speared skull is given devilâ€™s horns, pointed vampire ears, and a red clown nose, another skull gets a zipper or a set of toy vampire teeth.

The sculptures from the series "Death" (2003) seem at first glance to consist of pairs of inflatable male and female sex dolls. The couples, however, have been cast in bronze and lacquered with glossy paint. While the original models suggest lightness, this has changed fundamentally with the new materials. The "fleeting" moment is cast in bronze for all eternity, what was private becomes public, what was playful becomes heavy and inflexible. Cheap consumer and disposable items are transformed through an elaborate technical moulding process into valuable cult objects.