The state of things. The object in art since 1960 to the present day / Count on Us. Marina Abramovic 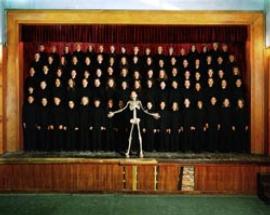 The ARTIUM Museum of Vitoria-Gasteiz presents the exhibition "The state of things. The object in art since 1960 to the present day" (North Gallery until May 22). Based on a selection of works from the Regional Contemporary Art Collections (FRAC) Franz, the exhibition examines the international artistic scene of the last 40 years, precisely as of the moment when day-to-day objects were fully integrated into the language of contemporary Art. The leading player in this exhibition is, therefore, the object: accumulated, disposed of, organised, provided with memory, displaced? From Marcel Duchamp to Andy Warhol, the exhibition includes the works of figures such as Boltanski, Daniel Firman, Gabriel Orozco, Joan Brossa, Bertrand Lavier and Juan MuÃ±oz. " The state of things" is a co-production of ARTIUM of Alava and MARCO of Vigo, with the collaboration of the Association Francaise d'Action Artistique.
The exhibition consists of 117 works from the collections of 17 FRAC (Fonds RÃ©gionaux d'Art Contemporain), a network of art centres created in 1983 by the French Ministry of Culture and the regional governments in order to promote and support the dissemination of contemporary Art. Through a selection drawn from these collections, "The state of things" proposes an examination of the development of international contemporary art from the early Sixties-the moment when everyday objects became a part of the discourse of art, to the present-day. Thus, the status of the "object" in art is proposed and analysed in all its forms and states, through a number of different artistic movements.
Based on this analytical method, which is a kind of cross section, the objects are gradually transformed, before our eyes, into reflections of the contemporary vision. On occasions, they speak of the experience of the immediate environment, or claim its own individuality as well as that of its artists On other occasions, they encourage us to reflect on their function and on the effects of the consumer society, or pose questions such as the uselessness of the work of art, or the frontiers between art and design. Finally, sometimes they become metaphors, symbols, traces of their immediate past, of their origins.
"The state of things" place before the spectator forty years of accumulated, compressed, invented, recovered, manufactured and decomposed objects, all the stages that artists have imagined. The variety of materials and treatments is very broad, ranging from day-to-day objects diverted from their normal function by Fluxus and provided with memory by Boltanski; objects discarded after use by the consumer society and reinvented by the "New English sculpture"; objects diverted from their normal function by Bertrand Lavier and John Armleder; inventoried objects by Claude Closky; deployed objects by Christian Marclay; accumulated objects by Daniel Firman; extolled objects by Patrick Tosani; objects from ephemeral encounters orchestrated by Gabriel Orozco; and all the other Utopian objects, machine objects, display case objects, cynical objects...
The exhibition begins with Marcel Duchamp and his BoÃ®te en valise (1966), a work that reproduces 83 miniatures of the artist, inventor of the ready-made, who as early as 1917, had raised a urinal to the category of "work of art" including an exhibition entitled Fontaine (1917). An object of daily use, which, taken out of context by the artist and placed on a pedestal, is now considered to be an artistic object. The result went well beyond provocation and established the basis - still in force today - of a new concept of the artist and of his work, according to which ideas are above manufactured objects.
The artists of the Fluxus movement (Robert Filliou, Ben), reintroduced the Duchampian and Dadaist inheritance by decontextualising day-to-day objects in order to produce "poetic and political" images and plays on words. Later, the Pop artists (Richard Hamilton, Andy Warhol) and the New Realists (CÃ©sar, Raymond Hains) became interested in mass consumption objects, incorporating these as integrating elements in their work, in order to establish a direct relationship between reality and the transformations of the contemporary world.
As of the Seventies, following in the wake of Conceptual Art, Christian Boltanski conceived a series of intimate objects, full of memory, and in the Eighties, the "new English sculpture " (Tony Cragg, Bill Woodrow) reintroduced the forms of Minimalist and Conceptual Art, and became interested in the margins of the consumer society. The decontextualisations of Richard Artschwager, or, later, those of Bertrand Lavier, John Armleder and Sylvie Fleury, represented a way of making a critical examination of the current history of sculpture and painting.
During the Nineties, Claude Closky, working with language and objects, used and staged anodyne "things" while the POF (Prototypes of Functioning Objects) of Fabrice Hybert questioned the production systems and dissemination of art. The object can also enter a more narrative terrain-as is the case of Xavier Veilhan-or be converted into a product, as shown by Jean-Luc MoulÃ¨ne. For his part, Gabriel Orozco questions the notions of "craftwork" and "industrial product", at the same time as L'Atelier Van Lieshout, among others, reflected on the status of the work of art, on its function and its forms of presentation, in order to redefine the economy of the object and its wishes.
The incorporation of the object into the work of art, the artistic object and its functionality, art and the consumer society; these and many more issues are tackled in The State of Things, a sample of the particular voyage of objects through the history of contemporary art and its creators.

North Gallery, until May 22
Co-production of ARTIUM of Ãlava and MARCO of Vigo, with the collaboration of the Association Francaise d'Action Artistique (AFAA)
Catalogue: Texts by Javier GonzÃ¡lez de Durana, Carlota Ãlvarez-Basso and ElÃ©onore Jacquiau Chamska. Edition in Basque, Gallego, Spanish and French.

Count on Us. Marina Abramovic

The ARTIUM Museum in Vitoria-Gasteiz presents the exhibition "Count on Us. Marina Abramovic" (Lower East Gallery, until May 8), with recent works shown for the first time in Europe by one of the most widely recognised artists in the field of body art and performance. Born in Belgrade in 1946, Abramovic has pursued a complex and risky artistic career in which the main focus of her attention has been her own body and mind, the limits of pain and physical and psychic resistance. "Count on Us" presents five major projections of other performances done in Belgrade. The images, laid out like a five-pointed star, allude to the tragic War of the Balkans and can be interpreted from a political viewpoint (the inefficiency of the international community during the conflict) or simply personal, i.e., to the despair and shame experienced by the artist during the difficult period in the history of her country. The exhibition has been produced by ARTIUM of Alava.
Marina Abramovic presents an exhibition full of references to the celebrated performance "Rhythm 5", performed in Belgrade in 1974, initiating a cycle, which, for a number of years, explored the limits of pain and physical resistance. The artist constructed a wooden, five-pointed star (a frequently-recurring symbol in her oeuvre, perhaps relating to the Communist regime), doused the perimeter with petrol and after setting it alight, cut her nails and hair (which she placed on the fire) and then walked into the centre of the star where she had to be rescued, overcome by the smoke.
Thirty years afterwards, Abramovic created "Count on Us", whose title may be interpreted as "Count on us" or "Count on the United States". Either way, the work can be seen as a criticism of the meagre interest shown by the international community during the War of the Balkans, and the way in which the major powers finally intervened in the conflict. However, Marina Abramovic prefers a more personal and intimate interpretation: the images seem to allude to the despair and shame she felt about that conflict.
With her usual scenography, similar to the rituals associated with witchcraft, Marina Abramovic proposes an installation consisting of five large screens, which are arranged in the room forming a 5-pointed star when seen from above, the first reference to "Rhythm 5". The first film shows the artist dressed up like a skeleton (in other words, Death), and directing a children's choir who sing a hymn to the United Nations Opposite, the artist, in her role as Death, is placed in the centre of a five-pointed star formed by a group of children.
In contrast to the two preceding works, the following two films present a more optimistic view of the future and show a boy and a girl looking up at the sky and singing a popular song. The star encloses the piece "Tesla", in which Marina Abramovic holds a fluorescent tube next to a Tesla wireless electrical transmission coil, from which she receives an electric shock. Nikola Tesla, the Croatian engineer, was an undervalued scientific genius, precursor of studies on missiles, satellites and robotics, among other areas and, in spite of this, was an ardent pacifist. The shock that the artist receives from the coil is perhaps the energy that Abramovic has sought throughout her life, capable of changing the world and making spirituality prevail over materiality.
The exhibition closes with another two videos: "Stromboli", in which Abramovic is seen to be in communion with nature, while she is caressed by the waves on the island of the same name, and "Tesla Urn", images about the rituals of fortune-telling that allude once again to the search for the spiritual and intangible.
Marina Abramovic is one of the most widely-recognised of European artists. Born in Belgrade in 1947, her works are included in collections such as the Guggenheim in New York, the Georges Pompidou Centre in Paris or the Dublin Modern Art Museum. Abramovic became well-known with her daring performances in which she explored the limits of the resistance of the human body. As of the Nineties, she created performances in which she reflected upon the existence and the political events of her native country, such as in the case of the "Balkan Baroque", for which she received the Golden Lion of the Venice biennial in 1997.

Lower East Gallery, until May 8
Produced by ARTIUM of Alava