An Overview. The artist caused a stir mainly through her spectacular performances in the 1960s, created under the influence of the 'second generation' of Vienna Actionism. In the body configurations of the early 1970s and 80s, the artist explored the boundaries between the human body and its environment. Expressing states of mind, she might for instance cuddle up to house corners, stairs, pillars and landscapes. 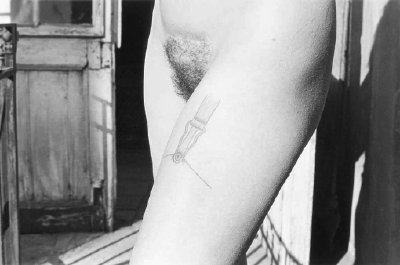 A comprehensive solo exhibition at The Essl Collection is being dedicated to the work of one of the international most important contemporary media artists. The exhibition encompasses about 120 items (video & film, photography, installation, drawings) and provides an overview of the output of VALIE EXPORT (born 1940 in Linz) from 1967 to the present. Curated by Caroline Bourgeois, this travelling exhibition was developed in co-operation with the Centre national de la photographie (CNP) in Paris and has already toured Seville, Geneva and London.

After four decades as an active artist, VALIE EXPORT enjoys high acclaim, not only in the USA but also in Austria and at international level, as one of the seminal protagonists of media art. In the 1980s and 90s she taught as a visiting professor at several universities in Europe and the USA; since 1995 she has been professor of multimedia performance at the Cologne Media Arts Academy. In her performances, photographs, installations and films VALIE EXPORT questions the identity and role of women/women artists in society, media representation systems and current social and cultural constraints. The artist explores the impact and effects that technical and electronic media have on human perception, communication and social behaviour.

The exhibition is structured in seven groups of works. First come the early pieces, which deal with the identity of the artist and her position in a male dominated Austrian art world in the post-war years. In 1967, the brand VALIE EXPORT is born. The artist drops her real name, Waltraud HÃ¶llinger, and uses part of the name of the Austrian cigarette brand SMART EXPORT for herself, thus striking a very masculine pose. Identity exchanges, role switches and selfportraits will continue to be a leitmotif throughout her work.

The artist caused a stir mainly through her spectacular performances in the 1960s, created under the influence of the â€œsecond generationâ€ of Vienna Actionism. In her legendary performance Aus der Mappe der Hundigkeit (From the Portfolio of Doggedness), 1968, she walked Peter Weibel on a leash, with him meekly following her around on all fours.

The TAPP und TASTKINO (Touch Cinema) performance of 1968 not only involved the artistâ€™s body but also an art form newly adapted by VALIE EXPORT, that of the "Expanded Cinema". The medium of film is replaced and expanded by new processes: a cardboard box strapped in front of the artistâ€™s chest turned into a cinema, her naked torso into a screen.

In her conceptual photographs, the artist uses the still camera like a video camera, thus destabilising space-time fabric.

Video installations, projections and films represent another group in the exhibition. Together with Peter Weibel Valie Export was, in 1973, among the first artists to test interactive electronic approaches in an exhibition context, challenging viewers to engage in some predefined action. In Autohypnose (Autohypnosis), 1969/1973, visitors can activate a video recorder that shows a tape with people applauding by walking the correct sequence of steps according to a certain code on a floor plate. The exhibition also presents two DVD compilations with the most important performance documentaries and experimental films created by the artist.

In the body configurations of the early 1970s and 80s, VALIE EXPORT explored the boundaries between the human body and its environment. Expressing states of mind, VALIE EXPORT might for instance cuddle up to house corners, stairs, pillars and landscapes.

Early drawings, also entitled â€œchildrenâ€™s drawingsâ€, represent a group of works by the artist that are rarely on display. â€œI did not intend to go back to the past, but wanted to mimic a child, to draw in a childish manner and to put in a little feminism as wellâ€.(VALIE EXPORT)