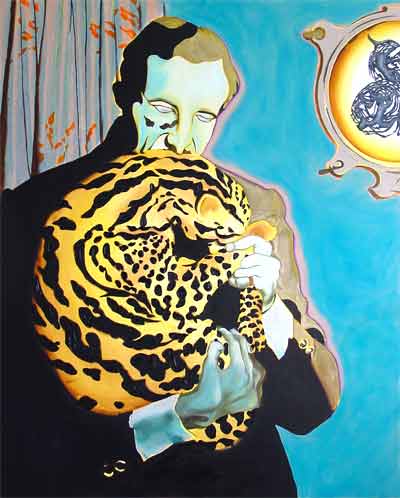 Peter Harrapâ€™s work is in the private collections of Michel Roux and the CEOâ€™s of HSBC and Laurent Perrier. He has been called a â€˜Great British Hopeâ€™, by John Russell Taylor in The Times and will be exhibiting at Marlborough Fine Art, Oct 2005

Natasha Kissellâ€™s work caught the eye of Saatchi at the RA in which â€˜he understood it immediately, seeing the humourâ€™ (Evening Standard, 10 June 2003). She was nominated for this yearâ€™s Beckâ€™s Futures and will be showing at Marlborough Fine Art, Oct 2005.

Rui Matsunaga paints a â€˜fusion of contemporary cartoon animation and ancient mythologyâ€™, Morgan Falconer, RA magazine 2002. She has exhibited internationally and been a finalist for the Lexmark Prize. Her work has been selected for a New York exhibition by the film director Simon Rumley co-held with the Armoury Show, 2005.

Miho Sato has been collected by Graham Norton. â€˜The quiet stillness and haunting resonanceâ€™ in her work is very striking, says Ros Carter in the John Hansard Gallery catalogue: New British Painting. She was a finanlist in this yearâ€™s John Moores and is due to have her first solo show with domoBaal Gallery in June 2005.

Rachel Shannon paints â€˜a strange fantasy worldâ€™ (Ossian Ward in RA magazine, summer 2004). She was nominated for this yearâ€™s New Contemporaries and a source has revealed that Dinos Chapman was especially taken by her work.

Hannah Wooll has recently shown in â€˜We didnâ€™t Mean to be Bad Kids â€“ TV made us do it!â€™ at Warrington City Art gallery and â€˜Le Petit Paysageâ€™ as part of the Liverpool Biennale Independents. She will also be exhibiting at New Yorkâ€™s Armoury show in March 2005.