Originality and non conformism, a non-orthodox image of Belgium's culture and history, from 1830 to our time. Harald Szeemann believed that only three countries could be considered visionaries, they were Switzerland, Austria and Belgium. The exhibition brings together old and contemporary works. A thematic itinerary puts such famous names as Ensor, Delvaux, Magritte, Panamarenko, De Bruyckere or Broodthaers side by side with other lesser known but equally surprising artists. A multi-disciplinary manifestation including plastic art, architecture and movies, literature and music 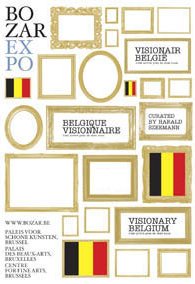 Originality and non conformism, a non-orthodox image of Belgiumâ€™s culture and history, from 1830 to our time.

Harald Szeemann believed that only three countries could be considered visionaries, they were Switzerland, Austria and Belgium. Following Visionary Switzerland presented in Zurich in 1991, and Visionary Austria presented in Vienna and Madrid â€“which the Centre for Fine Arts had shown in Brussels in the Spring of 1998- the museum asked him to design an exhibit in the same spirit. Szeemann sketched out a very personal and non-orthodox image of Belgiumâ€™s culture and history, from 1830 to our time. His tragic death a few days before the opening prevented him from personally presenting his finished work. But his spirit prevails.

The countryâ€™s hidden tendencies
The title of the exhibition refers to the existence of countries where the cultural history has a deviant current. The truly fantastic projects of a few individuals â€“whether artists, inventors or others â€“ and of existing, local popular traditions determine the aspect of its art and culture. The concept is similar to the previous ones, that is, a story that is neither linear nor historic. The whole thing is based on associations between masterpieces of a rather similar content. Szeemann stages and reveals hidden tendencies of the country. And the sub-title, â€œCâ€™est arrivÃ© prÃ¨s de chez nous" ( it happened near home) refers to Benoit Poelvoordeâ€™s eventful movie.

A refreshing concept
Szeemann noted â€œIf I say â€˜visionaryâ€™, it is because it does not refer to a simple art exhibit. Even if visual art is the common theme of the exhibit, the aim is to capture, through synthetic or dialectic means the genius of a country with given frontiers, in this case Belgium. The project is dangerous, but that is what I like. Through the medium of an exhibit with various entries, yet always on the poetic mode, I try to give shape to the spirituality of a region, of a country and its inhabitants. I try to pull out of it what is indescribable, what is not visible thanks to art, to literature, to inventions, to science, to customs, to traditions and to anti-traditions, thanks to faith and to revolts, whether in this case they are Walloon, Flemish or from Brussels. In short, that they create a world.â€

Originality and non conformism
The exhibition brings together old and contemporary works. The originality and non conformism are the leading theme of the project. A thematic itinerary puts such famous names as Ensor, Delvaux, Magritte, Spilliaert, Khnopff, R ops, Permeke, Panamarenko, De Bruyckere or Broodthaers side by side with other lesser known but equally surprising artists. It is designed as a multi-disciplinary manifestation including plastic art, architecture â€“Victor Horta, Henry Van de Velde â€“and movies â€“AndrÃ© Delvaux, Storck/Ivens, Thierry ZÃ©no-, while Belgian literature and music are approached in a very particular manner. Historic figures are very present as well. Szeemann would wrap it all in one explanation, There is the history of Belgium, the revolution in the theater, the linguistic regions, colonial policy, kings and bankers. Belgium is a country with eccentric collectors, curators and museum directors

Sponsor : Fortis. With the support of Africalia and DGOS