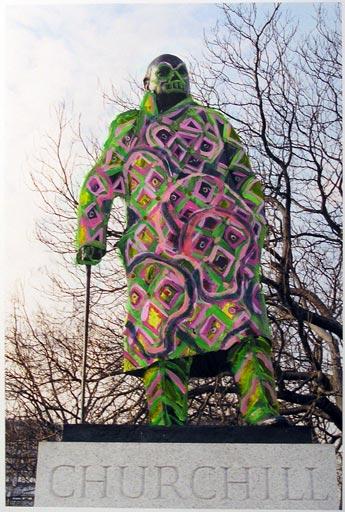 Born in Edinburgh in 1959, Locke's family moved to British Guyana where he spent his formative years before returning to Britain to study sculpture. Locke's fascination with the British monarchy started during his school days, printed on the front cover of every exercise book in British Guyana was the head of the Queen and no child was allowed to deface her image. Having completed an MA in sculpture at the Royal College and shown his large sculpture 'Hemmed In' at the Victoria and Albert Museum, he returned to his past fascination with all things Royal. Locke began to see the Royal Family as a vehicle through which he confronted and evaluated his experiences of growing up in British Guyana and his work began to develop a sense of a resulting cultural clash.

Locke's interest in the Royals as iconic signs of status, history and culture can be seen in his current series of large portraits of the Queen. Locke breaks down the image and then renders this famous face in his own terms, creating elaborate glitzy effigies with a hint of menace, out of modest materials such as plastic lizards, sequin waste, fake machine gun parts and silk flowers. The resulting excessive embellishments create a visual overload and bring to mind the flowers and fluffy animals heaped at Kensington Gardens makeshift shrine to Lady Diana, Princess of Wales, after her death.

A recently completed series of watercolour portraits of the Queen and Lady Diana will also be on show. Richly patterned and tribal in feel, these works are reminiscent of Locke's 'Cardboard Palace' shown at Chisenhale gallery in 2002.

Locke's work has recently been shown at Tate Britain as part of British Art Week. His work is currently touring in a two person show with Diana Cooper, organised by the Drawing Room. A catalogue accompanies this exhibition. Hew has an upcoming solo show at the Walsall New Art Gallery opening on 30th April 2005.