The Fabric Workshop and Museum

The Fabric Workshop and Museum, Philadelphia 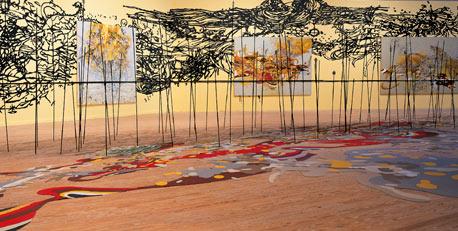 Matthew Ritchie: Proposition Player is an exhibition of artworks created with an interest in engaging consciousness. While the works contain a seemingly chaotic arrangement of colors and forms, each piece is in fact a deliberate map of the limitless connections that make up the universe's implicit order. The visual and underlying order in Ritchie's work mirrors the chaos and order of the universe.

The density of the work on view is the result of Matthew Ritchie's desire to see everything. "It's a fathomless desire, a weakness and a strength. But to do such a thing, you have to turn information into a physical form." Drawing from varied subjectsâ€”ranging from quantum physics to philosophy, from comparative religion to color theory, from game theory to mythology to pulp fictionâ€”Ritchie offers an opportunity for viewers to use his abstract maps and characters to further explore concepts accessible in the public domain.

In an attempt to organize the abundance of information he has gathered, the artist conceived of forty-nine characters organized in a matrix of seven families of seven. These characters reappear in his work, continuously creating new narratives and possibilities and constantly establishing relationships with one another.

A "proposition player" is a person brought in by a casino to encourage play. Ritchie, through this compelling interactive work, becomes a proposition player of sorts, inviting viewers to join him in a game. While explorers may choose to refer to his playing cards, texts and charts to untangle the complex continuum of Ritchie's universe, all viewers can loose themselves in the sheer energy, vibrancy, and depth contained within his work. "In the information casino," states the artist, "everyone can be a player."

As a FWM Artist-in-Residence, Matthew Ritchie worked in collaboration with the FWM to create The God Impersonator, an intricate, colorful floor sculpture that forms one part of the artist's larger, interactive installation and exhibition, Proposition Player. Constructed from custom-colored Johnsonite floor tiles, each interlocking piece was water jet-cut into CAD rendered shapes.

In addition to The God Impersonator, the FWM also presents Ritchie's latest work, Clinamen, a single-channel animation projection that is the prototype for a total animated environment and co-produced by the FWM; The Two-Way Joint, a backlit lenticular print which carries an image that changes when viewed from different vantage points; Proposition Player, an interactive craps game that takes the player through five stages of the evolution of the universe; and a variety of paintings and drawings, including a suite of drawings titled Five of a Kind.

Matthew Ritchie, Artist-in-Residence at the FWM, working on The God Impersonator.

The Fabric Workshop and Museum is the only contemporary art museum in the United States devoted to creating new work in fabric and other materials in collaboration with emerging and established artists from around the world. Founded in 1977, The Fabric Workshop and Museum has developed from an ambitious experiment to a renowned institution with a widely recognized residency program, an extensive collection of work by resident artists, in-house and touring exhibitions, and comprehensive educational programming that includes lectures, tours, in-school presentations, and student apprenticeships.

stampa
permanent link
The Fabric Workshop and Museum
IN ARCHIVIO [10]