Walls, Doors, Floors and Stairs. The exhibition is dedicated to the house as the central theme of her work. Reception and interpretation of artist's objects focus on the themes of recollection, past, and present, private and public sphere, intimacy, domestic life, childhood, loss, and death. The viewer searches for signs to explain the vague feeling inside, tries to discover personal traces of the inhabitants in the spaces, or projects his or her own visions into it. 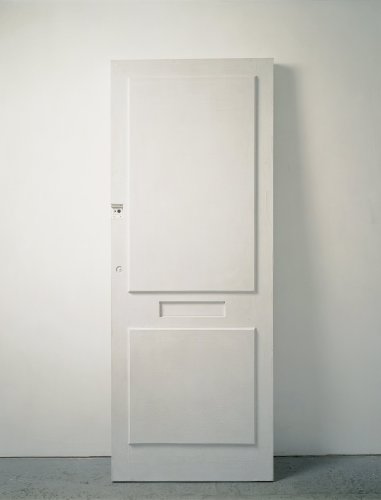 Since the end of the 1980s, the British artist Rachel Whiteread (born in 1963 in London) has created a unique oeuvre consisting of casts of fixtures, furniture, and spaces. As opposed to sixties minimalism, her work invites the viewer to partake in an intimate experience, conjures associations, and often produces a feeling of absence and loss. Rachel Whiteread broke into the international scene with her sculptures early on. In 1993, she won the renowned Turner Prize, and in 1997 she was awarded a medal for her contribution at the Venice Biennial. Throughout Europe and the United States, her work has been the subject of numerous solo exhibitions, and she has realized several public art projects including the â€œHolocaust Memorialâ€ (2000) in Vienna, â€œMonumentâ€ (2001) in London, and â€œWater Towerâ€ (1998) in New York.

When referring to the specific atmosphere of a space, one often speaks metaphorically, saying that it is filled with fear, sorrow, or tension, for example. In this context, the essential presupposition is the initial emptiness of the space, which allows the viewer to fill it with something. Hardly anyone has interpreted this filling process as literally as the British artist Rachel Whiteread, who fills spaces with industrial materials like plaster, concrete, rubber, polyester resins, and other substances. As soon as the material has hardened, the outer â€œshellâ€ is removed. The surface of the sculpture produced in this manner bears the imprint of the material that once enclosed it. Using this process for creating a negative imprint, the artist transforms empty spaces into solid blocks. Whitereadâ€™s works are usually casts of the interior spaces of furniture or utility items such as mattresses, wardrobes, or bathtubs. Since 1990, she has turned to larger-scale objects as well: entire living spaces and even a house, as well as individual architectural elements like floors, doors, and staircases. Almost all her works are characterized by a certain monumentality. The material and form of the objects sometimes lend the works an overwhelming compactness. Her colossal sculptures trigger a chain reaction of emotional, symbolic, metaphorical, personal, or ethical-political reflections.

â€œGhost,â€ 1990, is the first project based on an architectural space. It is a cast of a living room with an almost square floor plan in a typical Victorian terraced house in northern London. Whiteread removed all â€œsuperfluousâ€ objects from the space and concentrated on its purely architectonic form. Everything that otherwise takes up space makes room in the artwork, and vice versa: the fireplace is impressed into the mass; the window niches protrude outward, taking on substance; door frames, moldings, and thresholds become gullies and cavities in the object.

â€œHouseâ€ was completed between August and October of 1993 and was demolished in January 1994. The work was the cast of a Victorian working-class home. The former terraced house stood alone on an abandoned site in Londonâ€™s Bow neighborhood because the surrounding buildings had already been torn down. â€œHouseâ€ is often interpreted as a political statement about regional planning that backfired and its repercussions on the living conditions in this neighborhood.

Reception and interpretation of Whitereadâ€™s objects focus on the themes of recollection, past, and present, private and public sphere, intimacy, domestic life, childhood, loss, and death. The viewer searches for signs to explain the vague feeling inside, tries to discover personal traces of the inhabitants in the spaces, or projects his or her own visions into it. But the uniformity of the plaster or concrete blocks interferes with the narrative-memory-induced character of the constitution of the space. These spaces reveal no perceptible elements, from whose symbolism one might read a personal spatial meaning or even a history. This context also implies the theme of loss and death. With the solidifying of spatial volumes, the possibility of being becomes lost: homogeneous, solidified space ceases to reveal the identity of its inhabitants, and the fact that the material and shape of the objects have a certain resemblance to tombstones or even mausoleums â€“ which has been claimed repeatedly about â€œGhostâ€ â€“ nourishes associations with the theme of death.

The exhibition at Kunsthaus Bregenz is the largest solo exhibition of Rachel Whitereadâ€™s work in Austria. It is dedicated to the house as the central theme of her work. The presentation ranges from the basic elements of the house, such as the staircase in â€œUntitled (Upstairs),â€ 2000â€“2001, and three floor casts in â€œUntitled (Bronze Floor),â€ 1999â€“2000, â€œUntitled (Cast Iron Floor),â€ 2001, â€œUntitled Floor (Thirty-Six),â€ 2002, to a complete office in the sculpture â€œUntitled (Room 101),â€ 2003, as well as the new 14-part series, â€œUntitled (In Out Iâ€“XIV),â€ 2004, which comprises casts of doors from various London buildings done by Rachel Whiteread especially for Bregenz.

The original room 101, which served as the model for the work â€œUntitled (Room 101),â€ 2003, on display at the Kunsthaus Bregenz, was an office in the Broadcasting House of BBCâ€™s headquarters in London. During WW II, George Orwell worked here in the Indian Section of the Eastern Service and is said to have used room 101 as an inspiration for the torture chamber in his novel â€œ1984.â€ At BBCâ€™s invitation Whiteread took an entire cast of the room. Although the original office probably looked different in Orwellâ€™s day, the imprint imbues the sculpture with memories that transcend the mere extent of its boundaries.

Since the early nineties, Rachel Whiteread has been making casts of floors: â€œI used to make casts of the floor in my studio. I always thought they were like the bowels of a house, like the hidden corners that no one ever sees.â€ The floors are sculptures and architecture at once. The artist sees her floor casts as works in progress since they are constantly being altered by people walking over them. The traces of the footsteps from the past are superimposed and mixed with the footsteps of the present. â€œUntitled (Bronze Floor),â€ 1999â€“2000, is a cast of the floor from the Haus der Kunst in Munich, which can be traced back to the mid-1930s when the Nazis were in power in Germany. Transferring something that bore witness to this era to a contemporary building inevitably triggers memories of the past, intensifying the sculptureâ€™s purport.

â€œUntitled (Upstairs),â€ 2001, is a cast of a staircase in a house belonging to the artist and her boyfriend and located in Londonâ€™s Bethnal Green. Originally a church stood on the property; later, a synagogue that was destroyed in WW II. The fact that the work reflects an element of the artistâ€™s own life and work place lends it an additional level of meaning. Whitereadâ€™s staircases distance us from reality on two levels. Firstly, the empty space beneath the staircase is negated by transforming it into an impenetrable, closed form, and secondly, it is rotated on its own axis, thus appearing to suspend the laws of gravity and the viewerâ€™s own sense of orientation. These foreign and at the same time familiar configurations force one to envision oneself on the way up or down the staircase. Rachel Whitereadâ€™s staircases thus call into question the credibility of our perception and embody both absurdity and impossibility.

The Kunsthaus Bregenz would like to thank its partners for their generous financial support and the cultural commitment that goes along with it.