A founding member of the Dada and Surrealist movements in Europe. His paintings, steeped in Freudian metaphors, private mythology, and childhood memories, are regarded today as icons of Surrealist art. Comprising some 180 works, the retrospective includes his most important paintings, his celebrated collages, drawings, sculptures, and illustrated books lent by private and public collections in Europe and the US 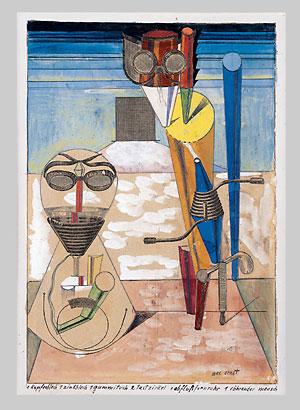 The much-anticipated exhibition Max Ernst: A Retrospective, the first major U.S. survey of the artistâ€™s work in 30 years, will be on view at The Metropolitan Museum of Art beginning April 8, 2005. Ernst (1891-1976) was a founding member of the Dada and Surrealist movements in Europe and was one of the most ingenious artists of the 20th century.

Ernstâ€™s paintings and collages, steeped in Freudian metaphor, private mythology, and childhood memories, are regarded as icons of Surrealist art. With the exception of Picasso, few artists have played such a decisive role in the invention of modern techniques and styles. Through some 175 works â€“ including his most important paintings, celebrated collages, frottages, drawings, sculptures, and illustrated books, lent from private and public collections in Europe and the United States â€“ the exhibition will explore Ernstâ€™s stylistic, technical, and thematic achievements.

Max Ernst: A Retrospective will also trace the artistâ€™s peripatetic career, which began in Germany before World War I, shifted to France between the wars, moved to the United States during World War II, and concluded in France. The exhibition is organized by The Metropolitan Museum of Art, its only venue.

Philippe de Montebello, Director of the Metropolitan Museum, stated: "While the importance of Max Ernst in the history of Dada and Surrealism has been recognized worldwide, the spectrum of Ernstâ€™s work â€“ along with its inventiveness â€“ has been less well-known in the United States in recent years. The Metropolitanâ€™s upcoming exhibition should redress this. As the first major survey of the artistâ€™s career in this country in three decades, Max Ernst: A Retrospective mirrors the extraordinary variety of Ernstâ€™s oeuvre and will include some of his most celebrated works from the different periods of his life."

Exhibition Overview
Ernstâ€™s famous proto-Surrealist paintings from the period of evolution from Dada into Surrealism are among the highlights featured in the exhibition. Based on the method of collage, they are built up of separate elements that create strange images, combining threat, comedy, and dream. Most famous among them are the iconic paintings created between 1921 and 1923, including Celebes (1921, Tate Modern, London), in which a hulking, horned elephantine creature, part machine and part beast, stands on a vast plain against a cloudy sky, gazing at a headless female nude. In Ubu Imperator (1923, Centre Georges Pompidou, MusÃ©e National dâ€™Art Moderne, Paris), an anthropomorphic top dances in a vast empty landscape. Such works might be said to capture early on the Surrealist notion of estrangement.

Other works from this period deal with themes of blindness and entrapment. In Saint Cecilia (1923, Staatsgalerie, Stuttgart), the patron saint of music and the blind is encased in a structure that covers her eyes and constricts her entire body, save her arms, which are outstretched to play an invisible keyboard. In The Wavering Woman (1923, Kunstsammlung Nordrhein-Westfalen, DÃ¼sseldorf), a large creature that could be either human or an automaton is engulfed by an electrical charge. In Oedipus Rex (1922, Private collection), male fingers, pierced by a mechanical device, emerge through an open square in an enclosed brick structure and balance above the heads of two trapped bird-like creatures.

Ernstâ€™s great technical refinement is on display in A Night of Love (1927, Private collection). The artist dipped strings of various strengths and widths in paint and then dropped them onto the canvas. From the remaining traces of these strings, he created the image of a couple wrapped in a starry night sky.

The artistâ€™s subsequent works incorporate the techniques of frottage (making a rubbing from a textured surface), grattage (frottage applied to painting), and decalcomania (manipulation of a still wet painting by pressing a second surface against it and then pulling it away). In the paintings, Ernst explores the themes of the forest and the ruined city, which poignantly foreshadow the political storm clouds gathering over Europe. For example, in The Fireside Angel (1937, Private collection), Ernst reacts directly to the menacing rise of Fascism.

Foreboding and memory characterize many of the remarkable paintings created by the artist during his time in the United States, from 1941 to 1953. The large-scale Vox Angelica (1943, Private collection) can be interpreted today as a manifesto on European art in exile, with its evocation of the life that had to be left behind when artists fled the advance of the war.

A catalogue, published by The Metropolitan Museum of Art and distributed by Yale University Press, accompanies the exhibition and is edited by Werner Spies and Sabine Rewald, with contributions by Spies, Rewald, Ludger Derenthal, Thomas Gaehtgens, Pepe Karmel, and Robert Storr. The exhibition catalogue is made possible by the Doris Duke Fund for Publications and the Mary and Louis S. Myers Foundation.

A variety of education programs will be presented in conjunction with the exhibition, including lectures and gallery talks. On May 1, 2005, a full afternoon of programming, part of the free lecture series Sunday at the Met, will feature a lecture and films

The exhibition is made possible by ALTANA.