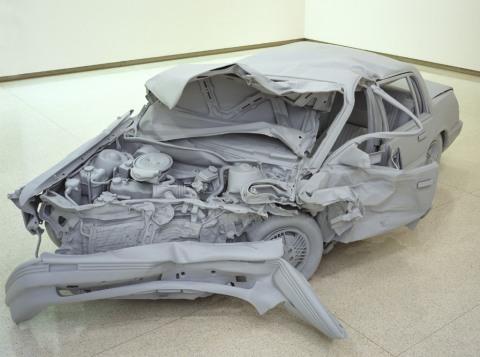 Collection Exhibitions
April 17, 2005 - August 3, 2008
The Walker Art Center's collection has increased dramatically since its current building opened in 1971, and has grown 40 percent (to more than 9,600 objects) in the last decade alone. The expanded Walker will increase total exhibition space from 30,000 to 40,000 square feet, creating 11 exhibition galleries and doubling the space allocated to the collection.

With the opening of the expanded Walker, the entire building will showcase the permanent collection. Featured will be a series of exhibitions rather than a single linear, chronological presentation. These installations will provide a thorough examination of the Walker's holdings as well as highlight those artists and artistic movements that have been the focus of the Walker's collecting practice.

Unfolding a chronological path through 50 years of art history, this exhibition begins with postwar abstraction, moves on to the historical and visual thrill of "alternative modernisms," and ends in the swarming and seductive experiments of the 1980s and 1990s.

American Standard
This section of the exhibition contains a selection of the Walker's Pop Art holdings as well as works by the movement's progenitors--Jasper Johns and Robert Rauschenberg. Centered on a classic ensemble of Andy Warhol â€œgrocery cartonâ€ sculptures, the installation also features work by Roy Lichtenstein, Claes Oldenburg, and Edward Ruscha. Multidisciplinary experimentation will be represented by Walkaround Time, a stage set created by Jasper Johns for a dance choreographed by Merce Cunningham, both of whom took Duchamp's legendary work The Bride Stripped Bare by Her Bachelors, Even (The Large Glass) as the source for their inspiration.

Variations on Convention
The last gallery belongs to the complexity and diversity of the 1980s and 1990s. A cross-generational installation demonstrates, through painting and sculpture, figuration and abstraction, that cultural and critical inquiry can live happily together with lyrical sensuality. Artists represented in this section include Chuck Close, Willem de Kooning, Robert Gober, Felix Gonzalez-Torres, Sherrie Levine, Glenn Ligon, Richard Mucha, Chris Ofili, Richard Prince, and Christopher Wool.

This exhibition looks at the phenomenal proliferation of moving-image material being produced by artists today, and asks why moving images have taken on such an important role in artistsâ€™ practices since the late 1970s and early 1980s. Bringing together film, video, painting, sculpture, and photography, this exhibition is a meditation on the ever-changing nature of contemporary art and its relationship to the ephemeral present.

Featuring work by Doug Aitken, Chantal Akerman, Rineke Dijkstra, Fischli and Weiss, David Hammons, Craigie Horsfield, Derek Jarman, Bruce Nauman, Philippe Parreno, and Jeff Wall, this exhibition is conceived as a "promenade" in which the audience becomes the main protagonist of a movie without a camera. Notions of dislocation, relocation, identity, urban space, and humanism, across cultures and disciplines, metaphorically and literally, are at the center of this exhibition that critically questions the limits of art and movie experiences, that challenges categories such as fiction and documentary, while re-asserting the preeminence of art as an emotional, moving, though conceptual, experience.

Contemporary artists today inhabit a world where distance and isolation have been supplanted by a new era of global connectivity ushered in by both the speed of modern travel and the increasingly extensive reach of the digital revolution. The artists in Urban Cocktail are part of a new breed of cartographers who are interested not so much in mapping the physical territory of this new urban experience, but instead seek to slow down our overheated perception of this brave new world by charting the contours of its heart, its diverse cultures, and shifting social dynamics. The means that they employ in this undertaking are quite diverse, reflecting their enthusiastic embrace of a wide range of surprisingly common materials as well as their attempts to explore forgotten, repressed, or marginalized moments of our personal or cultural history.

Four artist-designed installations featuring the work of mid-career artists with whom the Walker has developed long-term relationships--Matthew Barney, Robert Gober, Sherrie Levine, and Kara Walker--are presented in this exhibition.

Over the past decade, Matthew Barney has radically transformed the language of installation by collapsing it with moving image, performance, and sculpture. The Walker is the only American institution to own the entire Cremaster Cycle, an investigation of American history and politics, mythologies, sexuality, and personal fantasy created from 1994 to 2002. For this exhibition, Barney will create a room focused on the diverse sculptural and photographic elements of Cremaster 2, which premiered at the Walker in 1999.

Since the early 1980s, Robert Gober has developed a body of work informed by cultural memory as well as issues of pain, childhood, religion, sexual and racial politics. As early as 1985 the Walker acquired his Subconscious Sink, then in 1992, Gober's Slides of a Changing Painting entered the collection to become one of its signature pieces.

Sherrie Levine has developed over 20 years a critical investigation of authorship and originality through the appropriation and the reproduction of icons and genres of 20th-century art. Since the 1992 acquisition of Fountain (after Marcel Duchamp), her presence in the collection has grown with the addition of a major ensemble of paintings, photographs, and sculptures.

A 1996 acquisition and 1997 exhibition no place (like home) first brought Kara Walker to the Walker. She is best known for her large-scale narrative installations of figurative silhouettes retracing the dysfunctional narrative of American history. Her major, transgressive mural installation Endless Conundrum, An African Anonymous Adventuress was acquired in 2002. Her artist-designed installation will feature a wall mural, a selection of drawings, and a new animated film.

This exhibition features individual installations devoted to four artists with whom the Walker has long relationships. Jasper Johns ranks among the greatest painters, sculptors, and printmakers of the 20th century and the present day. Ellsworth Kelly figures significantly in the history of nongestural abstraction. Joan Mitchell occupied a celebrated stature in the generation of New York School artists that succeeded the first generation of Abstract Expressionists. Robert Motherwell was a guiding force in the art world of the mid-20th century as an abstract painter, printmaker, and theorist.

The Walker is home to an impressive collection of work by each of these artists. The Walker's status as an archive for Tyler Graphics Ltd. brought over 260 prints by Kelly, Mitchell, and Motherwell into the collection in 1984 (and continues to provide the Walker with the latest prints by contemporary artists). Printmaker Kenneth Tyler donated additional prints by Johns, Kelly, and Motherwell as part of a gift of more than 650 works in 1985. A gift from Kenneth and Judy Dayton in 1988 brought 184 new Johns works into the collection and provided the means for the Walker to receive one of each print Johns created thereafter. Gifts from the Dedalus Foundation and Margaret and Angus Wurtele in 1995 and 2000 added more than 300 new Motherwell works.

This exhibition, made possible by these generous gifts, will provide a rare opportunity for audiences to see the full breadth of the Walker's holdings by these artists, who have helped shape the aesthetic practices of the 20th and 21st centuries.

By the mid-1960s, critics and artists heralded the arrival of Minimalism, an idea-based sensibility that seemed more in keeping with America's embrace of its burgeoning space program and new technologies than the metaphysical and transcendental aims of the Abstract Expressionists and the subjective impulses of the Action painters of the late 1940s and 1950s. From very early antecedents, to the purest examples of Minimalism, this exhibition will provide a genealogy of the movement while showcasing one of the strongest areas of the Walker's collection.

Major works by Carl Andre, Donald Judd, Brice Marden, Agnes Martin, Richard Serra, and Robert Smithson provide a foundation for the exhibition. Although the works of these artists share many of the same formal devices, each came to a minimalist aesthetic through a different point of view. What may appear to be a clearly defined aesthetic is revealed in this exhibition to be an open discourse about influences, form, and content.

This exhibition is built around some of the most important pieces in the Walker's collection. Including works by Joseph Beuys, May Esch, Katharina Fritsch, Anselm Kiefer, Paul McCarthy, Julie Mehretu, Sigmar Polke, Charles Ray, and Paul Thek, Mythologies assembles a variety of media, including painting, sculpture, photography, multiples, and sound installation, around the idea of historical or contemporary mythologies.

Beuys, Kiefer, and Polke are questioning mythologies when reflecting on troubled history and the notion of national identity; mythology again comes into play when Charles Ray shapes a conflicted monument to the late 20th century in his Unpainted Sculpture of a wrecked car.