The original suggestion that Chagall should illustrate 'Tales of a Thousand and One Arabian Nights' came from the French publisher Ambroise Vollard in the Twenties, but the artist was well aware that for such an undertaking he would have to master one of the techniques of color printing, since only in that way could he transmute the written language of the tales into his pictorial imagery. 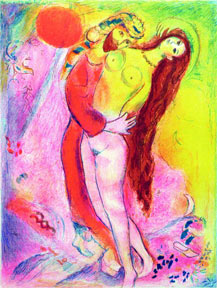 Four Tales from A Thousand and One Arabian Nights

It was almost as if the art world had been waiting for an artist to appear with the ability, character and background of a Chagall to illustrate the Arabian Nights in a manner entirely worthy of the tales. A painter was needed who could handle color so skillfully that the images conjured up in the reader's mind would be augmented and even surpassed by the visual images. Yet he also had to be capable of penetrating the language and imagery of the East and transposing them into a world of pictures intelligible to Western eyes.

Chagall's art is not bound to any single European tradition or style. Although he uses color as a means of expression and design he is not an Expressionist, and although he reduces individual forms to structural principles he is not a Cubist. Nor can he be included among the naÃ¯ve or surrealist painters, even if many of his people and animals are shown floating in the air and even if he does not obey the laws of proportion or perspective. Chagall combines the traditions of various cultures in his pictures, moving freely between East and West, and his creative imagination, as he himself once said, is "unexpected, Oriental, hovering between China and Europe." Perhaps this provides the key to the general accessibility of his art, which requires no erudite interpretation in order to be understood and which, in its simple pictorial language of the imagination, has something to say to people of all cultures and backgrounds.

To a certain extent the stories in the Arabian Nights are similar in genesis to Chagall's pictorial world, as a brief survey of the provenance and composition of this collection of fairytales shows. We know that the tales come from a wide variety of cultures Â­ India and Persia, Egypt and Mesopotamia, Syria and Arabia Â­ and that in the course of centuries they merged into a single work welded together by the Arabic language and the Islamic faith. Few people know that many tales deriving from Hebrew culture also found their way into the collection or that other stories from the traditions and legends of that culture became so strongly assimilated into the Islamic-Arabian world that their origin is scarcely recognizable. Again, long before the Tales of a Thousand and One Nights began their triumphant progress through the Western world in the first translation, by the Frenchman J.A. Galland, at the beginning of the eighteenth century, oral transmission had resulted in the presence of Arabian stories in many European fairytales. There are, for instance, many parallels between motifs in the Arabian Nights and in the tales of the Brothers Grimm.

The original suggestion that Chagall should illustrate Tales of a Thousand and One Nights came from the French publisher Ambroise Vollard in the Twenties, but the artist was well aware that for such an undertaking he would have to master one of the techniques of color printing, since only in that way could he transmute the written language of the tales into his pictorial imagery. At the time Chagall had no experience of color lithography. It was only years later, during his exile in the United States, that in Albert Carman he found a printer with whom he could work on a successful application of the color lithography technique. The result was Four Tales from the Arabian Nights, published by Kurt Wolff in 1948 for Pantheon Books.

Chagall had become interested in the world of fairytales some years before he started work on the lithographs for the Arabian Nights. This was a result of his encounter with Igor Stravinsky and the former choreographer of Diaghilev's Russian Ballet, Leonide Massine, who commissioned him to design the sets and costumes for Aleko, a ballet by the head of the American Ballet Theater, Lucia Chase, based on a story by Pushkin and with music by Tchaikovsky.

The great success of Aleko soon led to further collaboration with the American Ballet Theater, and many motifs in the costumes that Chagall designed in 1945 for Stravinsky's Firebird clearly point to the lithographs for Four Tales from the Arabian Nights that were to follow shortly after. The concentrated subject matter of the Arabian Nights illustration inspired a further intensification of the magnificent coloring and the mystical light of the Orient that had pervaded the ballet, making Chagall's first attempt at color lithography a particularly splendid jewel in the crown of his graphic work.