Baghdad Pizza Hut. We are bombarded with images from our TVs, the Internet, billboards on the roads, posters on the sidewalks. What the artist is interested in, what is signified by the multiplicity of narratives and symbols he draws from to build these paintings, is the nature of the patterns that take shape during these unruly interactions. 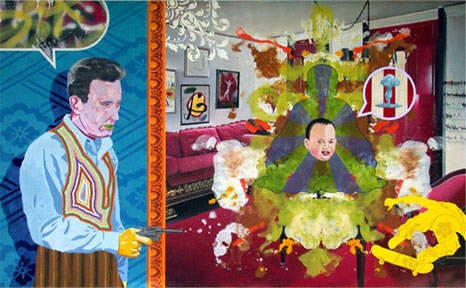 In a world of images multiplying like germs, a painting can be a kind of Petri dish. The paintings in Baghdad Pizza Hut investigate fluid moments in the compound visual dynamic that defines our culture today. We are bombarded with images from our TVs, the Internet, billboards on the roads, posters on the sidewalks; the very air seems clogged with them; bacterial images proliferating and intermingling every moment. What Ehringer is interested in, what is signified by the multiplicity of techniques, styles, narratives and symbols he draws from to build these paintings, is the nature of the patterns that take shape during these unruly interactions.

The lexicon of objects in the work (roses, paint drips, nudes, landscapes, costumes, foods, furnishings, butterflies, farm animals, weaponry, texts, surfboards) are part of a primarily pattern-making process rather than a specifically narrative one. However, due to the richness of the iconography, they simultaneously support a fabulist function as well. In other words, the objectsÂ¹ situations in a rigidly delineated system encourages them to function like elements of abstract composition. Rather than follow a plot, they create the illusion of narrative through juxtaposition. And, yes, women are used as objects on this conceptual grid; but they are objects of beauty and desire, much as works of art are themselves objects in a market economy.

Despite the sexually aggressive nature of several of the images, upon closer inspection the surfaces reveal a fine craftsmanship that bespeaks more than mere rebellion or iconoclasm. Ehringer demonstrates an obvious respect for painterly technique and the conventions of art history; and his employment of dozens of approaches within any given canvas emphasizes the hybrid character of his vision. By making it impossible for figures to inhabit anything like consistent space or a unified environment, the viewer is urged to regard each painting as a compendium of choices. On the one hand, the workÂ¹s humor and clarity of meaning are rooted in faith in the ability of strangers to communicate through images without language. At the same time, forces are unleashed which deconstruct this channel and undermine the idea that any image possesses an inviolable meaning. ItÂ¹s a high-wire act, hard to achieve and nearly impossible to control. It is a slippery slope, but one that inhabitants of the modern city navigate every time they open their eyes.

On a more personal note, I was struck on the drive back from the studio by a view I had from the 10 Freeway. To the north was grand vista of lush green valleys that climbed up from the meadows that stretched away from the roadside. Beyond them were snow-capped mountains reflecting the astonishing gold-pink glow of the setting sun ahead of me. But intervening directly between myself and the very edge of this vision were the billboards that sat immediately off the road, forming a kind of bottom margin on the entire paradisiacal scene. Horrid, crisp images of girls and beer and actors, plenty of text, plenty of color. Jarring and annoying. But my irritation was ameliorated almost immediately as the realization hit me: this is the aesthetic paradox of the heart of EhringerÂ¹s work. We live in a world that does not filter our images; we get it all from the hideous to the glorious; we see it all and only then do we have the luxury of sorting it out for ourselves. One has not got the option of closing oneÂ¹s eyes, for to do so would be to miss every opportunity to receive beauty and grace and life-giving stimulation, as well as every chance to figure out what it means.