''The new Romanticism seems to be omnipresent, whether in the studios of London, New York, or Berlin. Drawing on this wealth of artistic forms of expression, the exhibition focuses on the most striking examples. The young artists are as aware of their historical predecessors as of recent years' discussions. From that point-of-view, their supposedly revisionist return to an emotional mode of expression is far from aloof but right in the center of today's discourse and makes them seismographs of this society's longings and fears.'' Max Hollein and Martina Weinhart. Works by 13 contemporary artists. 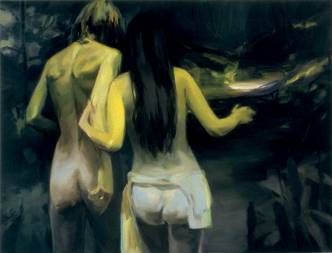 In a society marked by increasing mobility and waning social bonds, a new yearning for intimacy and security prevails. The flood of bad news and images of terror makes people long for safe places and redemptive perspectives. This situation is also reflected in todayâ€™s visual arts. After the analytic explorations of discourse in the 1980s and 1990s and the remaking of art into a social act, we are confronted with a revival of the traditional work wherever we turn to. Artists such as Peter Doig, Laura Owens, Uwe Henneken, David Altmejd, Kaye Donachie, Karen Kilimnik, Justine Kurland, or David Thorpe have clearly taken up a thread of the Romantic spirit. Yet, behind the desire for the paradisiacal, the beautiful, and the magic of fairy-tales, the dark and the eerie are as present as the insight that Utopias are doomed to failure. The artists do not only rely on painting for their works, but employ the key media of postmodernism like photography and installation.

The exhibition was sponsored by Sireo Real Estate Asset Management GmbH. It was also supported by Mercure Hotel & Residenz Frankfurt, the Novotel Frankfurt City West, the British Council, and the Canadian Embassy.

Max Hollein and Martina Weinhart, curators of the exhibition: â€œThe new Romanticism seems to be omnipresent, whether in the studios of London, New York, or Berlin. Drawing on this wealth of artistic forms of expression, the exhibition â€˜Ideal Worldsâ€™ focuses on the most striking examples. The young artists are as aware of their historical predecessors as of recent yearsâ€™ discussions. From that point-of-view, their supposedly revisionist return to an emotional mode of expression is far from aloof but right in the center of todayâ€™s discourse and makes them seismographs of this societyâ€™s longings and fears.â€

No other period of German intellectual history has produced as many misunderstandings as the Romantic movement. In everyday language, the term is generally used in a reduced sense meaning sentimental, far from civilization, full of atmosphere, rapturous, picturesque. This use has only little to do with the actual movementâ€™s complex character. The Romantic spirit aims at more than the paradisiacal and the beautiful; it also includes the subversive tenor of transcending limitations we find in the poeticization of the world by Novalis or the brothers Schlegel. While the Romantic manifests itself in the form of gloomy sketches of uncanny counter-worlds for E. T. A. Hoffmann, Caspar David Friedrich confronts us with symbolically charged landscapes and Henry Fuseli with irritating dream visions. The Romantic also stands for young peopleâ€™s deep skepsis about the rigid conventions of academic institutions and the call for artistic independence as uttered by Philipp Otto Runge. As an emotional symptom of a social reality already informed by political and economic upheavals in the 19th century, it definitely provides a parallel with the present-day situation. Todayâ€™s generation of artists counters the restructuring of political systems and the loss of comprehensive social plans with an aesthetics beyond the ordinary. The aspect of transition creates a vocabulary of yearning rooted in the historical Romantic movement.

Loneliness as an essential Romantic outlook â€“ this central subject is mainly dealt with in the form of sceneries charged with symbolic qualities. Contemporary art encompasses numerous variations of this theme which range from the threatened idyll and its invocation to the overwhelming impression of outer vastness and nature as a space for regarding the transcendental. Catherine Opieâ€™s surfers are just little points against the infinity of the ocean. In these photographs, the waves blend into the grey sky in a quite matter-of-fact way. Thus, man seems to disappear all the more in the vagueness of a material space offering no support. In spite of the subject, there is no echo of the fun of todayâ€™s leisure industry. Christopher Orr also exposes his protagonists to the confusion of haze and the dark. Nature has been reduced to a symbolic prop. The figures are not granted any chance of spiritual transfiguration: caught in an inscrutable distance from nature, they give expression to a key issue of the Romantic discourse. Though, at first sight, Orrâ€™s paintings seem to comply with C. D. Friedrichâ€™s request that painters should not only paint what they see in front of them but also what they see inside, his works reveal themselves as deceptive in this regard just like the works by the other artists from this generation of new Romanticists when you have another look. The artistsâ€™ motifs do not stem from deep down inside them but from old newspapers, magazines, films, and similar sources. Apart from superficial quoting and contextualizing, the individual elements are translated into dream visions characterized by an open and associative structure. So Peter Doigâ€™s figure of a painter seen from behind and facing an impressive mountain scenery rather amalgamates imagination and historical photography than presenting a self-portrait of the artist.

Todayâ€™s artists have got used to the filter of the media. This is the postmodern message concerning the immediate experience of nature in the Romantic period. Kaye Donachie also employs visual evidence from different groups of persons, communes and counter-cultures, which she takes from documentaries and super-8 films. Appropriating existing images, she focuses on overstepping limits and a Romantic revolt that mirrors the fascination of todayâ€™s Romantic generation for the alternative concepts and cultures of the 1970s. Justine Kurlandâ€™s photographs of dropout communes in rural America also relate to the Utopian ideas of the hippie generation and present them like relics of a past era. In his cut-outs, Simon Periton combines the symbol of anarchy, which conquered the mass media and won the Western teenagersâ€™ hearts at the peak of the anti-establishment movement in the mid-seventies, with the Biedermeier character of a fragile festoon in a seemingly effortless fashion. With a playful Runge-style virtuosity, Periton recalls the Utopian dimension of the

Romantic period and links it with a concrete political message. Finally, artists like Uwe Henneken, David Altmejd, Christian Ward, and Karen Kilimnik explore the spirit of Romanticism in a pop-cultural context. The colors of Hennekenâ€™s frequently exaggerated presentations do not shrink from kitsch. We often see the full moon shining through the branches in Laura Owenâ€™s pictures: she is not afraid of the charged directness of such emblems either and, like the others, knows how to break them and convert them into a radical contemporary vocabulary.

Considering these contexts, Romanticism presents itself as an approach which has been taken up, continued, and transformed in a variety of lines and strategies of appropriation by todayâ€™s artists who aim at much more than at reviving a gamut of motifs saved as melancholy props from a glorious past. Todayâ€™s Romanticism is a meta-Romanticism working with postmodernist means. It unfolds a synthesis of past and present, emotion and discourse.