Artists living and working in Brooklyn and the surrounding boroughs. The show seeks to find a different means of surveying new work by artists; 30 artist's works were selected that represented unique and innovative approaches among largely unknown and unrepresented artists. Curated by Alex Dodge and Glen Baldridge. 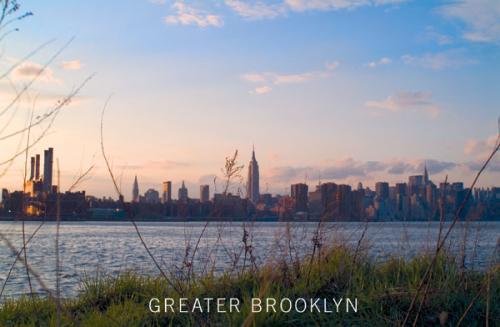 Greater Brooklyn was conceived as an exhibition focusing on unrepresented artists living and working in Brooklyn and the surrounding boroughs.

Each summer hundreds of new artists, 'fresh' from art school in some form or another, find themselves amongst their fellow classmates, cheap beer in hand in post-graduatory spirit, gazing at the Manhattan skyline from the rooftops of recently converted industrial buildings. Each year a little more distant and each year a few stops further along the subway lines. What was once dubbed The City of Lost Souls by a certain visitor to the Yale graduate program has become home, over the past few decades, to thousands of artists. A perennial phenomenon of the aspiring defined by proximity and necessity or by ambitions and a means toward them, ever growing and perhaps now after some 30 years of settlement this vast refuge of cultural producers is nearing something close to equity in terms of supply and demand. Only recently, in a commercial climate that seems to be constantly redefining the viability of newer and often younger artists, does it seem that there are fewer and fewer artists that can be called anything but emerging or emerged for that matter. Still, as always, there remain those that have yet to become noticed or emergent, and those that, after many years of making art, could still be called unknown by some notion of locality.

Greater Brooklyn seeks to find a different means of surveying new work by artists in New York.
Inspired by a time when entire exhibitions are sold through emailed reproductions of artwork, the
selection process involved an open-call to artists in the form of an email invitation distributed and redistributed as an undeterminable form of chain-networking. This resulted in hundreds of
submitted applications and hundreds more digital images of the applicantâ€™s submitted work. No
studio visits were made. Instead the exhibition was curated entirely on the basis of digital
reproductions and submitted samples of writing. 30 artistâ€™s works were selected that represented
unique and innovative approaches among largely unknown and unrepresented artists.

Greater Brooklyn was curated by Alex Dodge and Glen Baldridge.