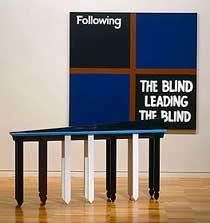 When images no longer seemed enough artists incorporated words, text and literary references into their art to alter our experience of the visual arts. Since the early 20th century artists have included text and narratives in their art works. The use of language was vitally important in Cubist, Dada and other avant-garde art movements. Later in the century it was a key to Pop art which frequently incorporated advertising text and logos, and to Conceptual art in which language often became the artwork itself.

Over the last two decades in Australia, the use of language in contemporary art has been integrated much more so than previously.

Unscripted: language in contemporary art will bring together 22 works by some of Australia's most well-known contemporary artists who use language as part of their work. Some of the art works make social and political comments, in others language is used for its beauty or aesthetic qualities, while in some works language reflects something more personal and confronting.

The art works selected for this exhibition use words in varying ways. The text in the works of Peter Kennedy, Scott Redford and Matthew Jones triggers memories and suggests the intersection of the personal and political. The suite of drawings by Jones are meticulous copies of the New York Daily News on the day of Judy Garland's funeral. Subsequent riots in response to police repression of gay and transvestite mourners sparked the birth of the gay liberation movement. More intimate experiences are the subject of Jenny Watson's poignant paintings with narrative panels.

The influence of language on our perception and representation of the landscape is explored in works by Ian Burn, Simryn Gill, Rosalie Gascoigne and Robert MacPherson. Both Gascoigne and MacPherson refer to the signs we see when driving through the landscape. Gascoigne's work is assembled from cut up retro-reflective road signs. MacPherson's painting emulates the language and symbols on hand-made roadside placards advertising produce for sale.

A consideration of how certain narratives have shaped our sense of self in art, informs works by Peter Tyndall, Mike Parr and Imants Tillers. The centrality of words to Christianity is encountered in both Tyndall and Tiller's works, though in both through the appropriation of other art which creates a critical distance between originary myths and their contemporary resonance.

In Kate Beynon's 100 forms of happiness chenille pipe cleaners are twisted into the plethora of Chinese calligraphic characters that describe happiness. Adam Cullen and Gordon Bennett use graffiti-like images and text to point to some of the contradictions and ugly uncertainties that underlie our sense of national identity.

"In Australia Pop art and Conceptual art saw words widely incorporated in art from the 1960s onwards. With the first wave of post-modernism in the late 1970s and 80s many artists looked critically at our cultural narratives through using language in their art practice. This exhibition explores some of the myriad ways in which artists have continued to use words and text in recent years," said Wayne Tunnicliffe, exhibition curator and Curator of Contemporary Australian Art.