'Los Caprichos'. Francisco de Goya's etching and aquatint series (published in 1799) is a view of both man's power of spiritual creation and the failings of his own nature. And it is this insight into the reality of man which makes it possible to depict the human figure as beautiful and at the same time to caricature it. Such a composition of socio/political satire was enlightening to the 18th-century rationalist, so confident about his ability to comprehend both man's capabilities and limitations. The artists in 'Here Comes the Bogey-Man' pay tribute to Goya and carry his spirit, evoking global issues, into the 21st century. 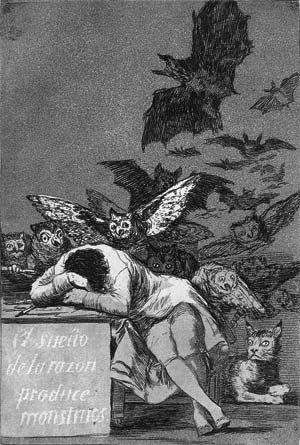 Francisco de Goyaâ€™s etching and aquatint series â€œLos Caprichosâ€ (published in 1799) is a view of both manâ€™s power of spiritual creation and the failings of his own nature. And it is this insight into the reality of man which makes it possible for Goya to depict the human figure as beautiful and at the same time to caricature it. Such a composition of socio/political satire, no doubt, was enlightening to the eighteenth-century rationalist, so confident about his ability to comprehend both manâ€™s capabilities and limitations. Goya wanted to express, not represent. The plate by Goya entitled â€œThe Sleep of Reason produces Monstersâ€ (first intended as title for the whole series of â€œLos Caprichosâ€) reads: â€œImagination, deserted by reason, begets impossible monsters. United with reason, she is the mother of all arts, and the source of their wonders.â€ (â€œGoyaâ€™s Caprichosâ€ by JosÃ© Lopez-Rey - Beauty, Reason & Caricature Vol.1, 1953 Princeton University Press). In â€œHere Comes the Bogey-Manâ€ (â€œQue viene el Cocoâ€) Goya refers to the â€œBlack Manâ€ that children fear more than their own father as a symbol of the blind belief in authority ruling the naive and influenceable commoner. Needless to say, we have quite a few of those â€œblack and fearful ghostsâ€ in our culture, ever-present to create panic and fear â€“ the consequence as in Goyaâ€™s time of superstition and poor education.

In an essay for the exhibition â€œDrawings by Goyaâ€ at the Prado in 1947, Andre Malraux wrote: â€œGoya discovers his genius the day that he dares to stop to please. He substitutes seduction with revelation and discovers the vulnerability of the spectator, the weakness of a culture put in question face to face with the artist that proclaims his truth. Goya created a desperate and solitary art â€“ the beginning of modern painting.â€

The artists in â€œHere Comes the Bogey-Manâ€ pay tribute to Goya and carry his spirit, evoking global issues, into the 21st century: In direct appropriation from â€œLos Caprichosâ€ by Yasumasa Morimura and Conrad Atkinson. In a mythological way, in the work of Rona Pondick, Ray Smith and Kimiko Yoshida. In socio/political satire with Saint Clair Cemin, Carlos de los Rios and Yun-Fei Ji. In symbolic picturings of the â€œdark sideâ€ by Madeleine Hatz and Fabian Marcaccio (Goya said â€œthere is only black and white in nature.â€) In a pun on religious issues by Masami Teraoka. There was rarely a time more appropriate to rethink the relationship of the artist and his society than Goyaâ€™s era and our own. The novelist Emilia Pardo Bazan wrote in 1906 in an article published in La Lectura: â€œThe history of Goyaâ€™s thought and the progressive development of moral, social, philosophical and political ideas in his work is probably more interesting than his novelistic life.â€ In the work of Rona Pondick and Kimiko Yoshida there is an expressive, abnormal and violent ugliness like that in â€œLos Caprichosâ€: Romantic Ugliness. As in Goyaâ€™s time, our daily news reports monstrosity, insanity, brutality, violent madness, perversity, and torture, all influencing and coloring the work of the artists in â€œHere Comes the Bogey-Man.â€ Only momentarily do we find a ray of hope in Goyaâ€™s â€œLos Caprichosâ€ as well as in the work of these contemporary artists: and it is a dawn of intellectual and emotional hope.