Michel Francois employs different types of media and techniques in conjunction, including installation, video, sculpture and photography, to express his refined and idiosyncratic view of reality. You could say he makes inventories of the world around us by way of antithesis. Xavier Nellens believes very strongly his paintings are a product of the cultural, political and social context in which they are created. Their meaning is defined by their origin and by the symbolic references the artist has embedded in the act of painting. 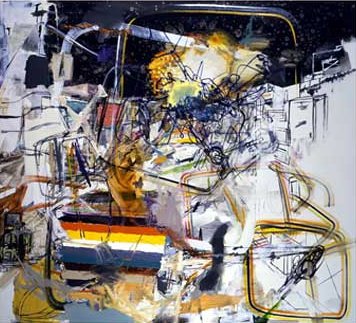 Xavier Hufkens is pleased to announce the first exhibition in the gallery by the renowned Belgian artist Michel FranÃ§ois. Over the last 10 years, FranÃ§ois has built a strong, international career with exhibitions in many European as well as American institutions and galleries.

Michel FranÃ§ois employs different types of media and techniques in conjunction, including installation, video, sculpture and photography, to express his refined and idiosyncratic view of reality. In general, you could say he makes inventories of the world around us by way of antithesis. FranÃ§ois is creating spaces of reflection or of self-awareness, by showing normal human occurrences as well as recognisable processes and objects. Yet at the same time he reverses things, or rather, turns them inside out. Some inversions are formal such as convex and concave, empty and full, light and dark. But others speak more to social structures such as freedom and imprisonment, riches and poverty, work and leisure, survival and play. The standard measure of all his works is based on essential questions about man: what he experiences in the world, how he senses the world and how these sensations are related to his way of thinking and perceiving.

In his work, Michel FranÃ§ois is concerned with all things separately and collectively. The same is true for his exhibitions. One image or sculpture refers to another which in its turn will allude to the reality outside the exhibition space. What seems to be a chaos at first sight is in fact a different kind of logic, one based on divergence, change and multiple possibilities, similar to the ramifications of a cactus, the pattern of an octopus. For this reason, the exhibition is almost like a living organism to FranÃ§ois. His exhibitions do not only consist of a number of tangible objects, but also to a large extent of contamination, a continuous interaction between the individual, the objects, the architecture, the networks and nature. In his own words: â€œLâ€™art, de toute faÃ§on, câ€™est la vie que lâ€™on sculpteâ€.

Xavier Nellens (Â° 1970) is a Belgian painter who, after his last exhibition in Brussels in 1999, left on a long journey. He sailed the Atlantic Ocean on a small sailing boat, lived in Cuba for more than two years, made a clandestine movie about Cuban dissidents and afterwards moved to New York, where he rented a studio and worked for another two years. Back in Belgium, he started a new series of paintings, which will be presented on the occasion of his first exhibition at Xavier Hufkens.

Xavier Nellens believes very strongly his paintings are a product of the cultural, political and social context in which they are created. Their meaning is defined by their origin and by the symbolic references the artist has embedded in the act of painting. For him, painting is inextricably bound up with obsession and, in particular, with the search for truth about man and life. The paintings by Nellens are an interrogation as well as an attempt to create answers. His work defines his relationship towards reality as much as his vision of the world influences his paintings.

The artist lends an essential role to the act of painting in itself, with its spiritual and physical implications.

Throughout the long and repetitive process of applying paint with movements of the wrist, the arm and the whole body; of conjugating fields, lines and colours in the given space of the canvas, â€¦ Nellens feels himself protected by a virtual alcove, of which he is the central subject. Ideas flow freely within this concentrated context and result into the constellation of an image. Xavier Nellens lends to this image, to each painting as well as to his whole oeuvre, a Leibnizian meaning. In his view, each part, each sensible expression of an idea, contains the whole while the whole is reflected in each, single element.