Old News. 38 artists from around the world represent a year-in-review through examination of articles and images taken from print media sources. A project organized in two concurrent formats â€“ a traveling art exhibition and a free newspaper publication â€“ together in a reciprocal, social event. The Minded Swarm. Four artists collaboratively produce large-scale sculptural installation through science fiction-inspired 'Communal Consciousness'. 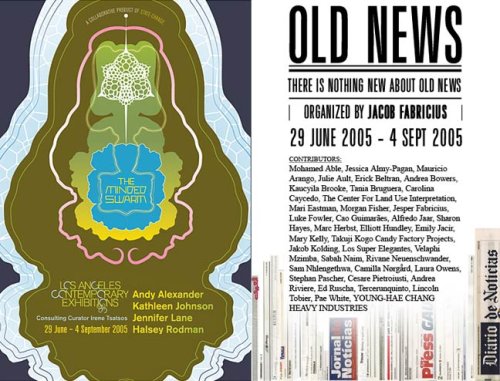 Los Angeles, 1 June 2005 â€“ Los Angeles Contemporary Exhibitions is pleased to present a project by Copenhagen-based curator Jacob Fabricius organized in two concurrent formats â€“ a traveling art exhibition and a free newspaper publication â€“ together in a reciprocal, social event called Old News. The concept-driven, curatorial practice of Fabricius started in 2004 when he invited one artist a month to collect four articles or images from news sources s/he read during the designated month. Each artist was also asked to invite a fellow artist of their own choosing to do likewise. Some artists culled their articles and images from webnews sources; most from print publications; and a few artists re-worked the clippings graphically. The resulting collection of materials were assembled and reprinted in what would be a snapshot of the year through the eyes of the participating artists, the Old News publication.

In a second tier of exchange and dialog, Fabricius developed the Old News exhibition. For the premiere installation at LACE, Fabricius has invited fourteen Los Angeles-based artists to join the exhibition to bring a site-specific layer of discourse to the event. At LACE, we invite you to view and read the original clippings on display, and to interact with a larger reading-lounge-format installation of records, books, and other material relating to Old Newsâ€™ idiosyncratic collecting principles. Each subsequent presentation of Old News will involve different artists and accumulate more material as the exhibition travels internationally to Sweden and France in 2006.

Friday 1 July at 7 pm
Panel discussion with the artists of Old News and the organizer of the exhibition, curator Jacob Fabricius.

Los Angeles, 1 June 2005 â€“ Los Angeles Contemporary Exhibitions (LACE) is pleased to announce The Minded Swarm, a collaborative, large-scale sculptural installation organized by Karl Erickson with Consulting Curator Irene Tsatsos. Science fiction (SF) enthusiasts and artists Andy Alexander, Kathleen Johnson, Jennifer Lane, and Halsey Rodman are attracted to the genreâ€™s social and political models, and its exploration of the human condition. The artists have met for some years in a science fiction reading group, absorbing SFâ€™s mode of fantastic speculation into their own practice. Assuming the model of a Gestalt Organism (Theodore Sturgeon, More than Human, Vintage, 1998.) where individual capacities merge to create a single distributed intelligence, the artists have enacted a state-change, adopting a communal consciousness (Olaf Stapledon, Starmaker, Wesleyan University Press, 2004 (1937), p. 271.) as a means of artistic production. Their resulting environment will comprise two zones or microclimatesâ€”the Zone of Encounter, a transitional domestic interior, and the Zone of the Superstructure, an unstable architectural form seemingly in flux and embodying the amorphous spirit of the Utility Fog ( Ray Kurzweil, The Age of Spiritual Machines, Penguin Putnam, NY, 2000, p. 145.). The work reflects both the utopian, speculative impulses of SF and a celebration of the everyday reality of the existing built world. As these four superpowers merged, the subsequent hive mind has harnessed group energy to address the psychological, psychosexual, phenomenological and formal properties of materials and built form, both real and imagined.

As part of The Minded Swarm, the artists invite the public to join them for their regular July book club meeting. They have chosen Altered Carbon by Richard Morgan and invite all interested parties to read the book and join them for the discussion on July 15 at 7:30 pm in the LACE galleries. The artists will also publish the list of books the club has read to date on LACE's website, www.artleak.org.
----
The artists wish to acknowledge collaborators Andy Goldman, Wook Kim, Geoff McFetridge, and Mike Holz whose creative contributions have greatly expanded the Swarm consciousness, as well as the ongoing inspiration provided by fellow sfbc member Alisa Loftin.

Friday 15 July at 7pm
The artists of The Minded Swarm invite the public to join their regular sci-fi reading group. Interested parties should read Altered Carbon by Richard Morgan and engage in discussion.