Willem Weismann: Shantytown. Artist's paintings are both grotesque realistic, openly constructed, and overwhelmingly detailed. Christian Finne: Todays hippies are the assholes of tomorrow. The artist works with drawings and installations which often have a direct connection to his own life and experiences. 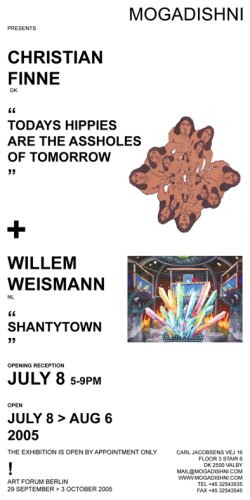 MOGADISHNI is pleased to present the solo exhibition 'shantytown' by Willem Weismann.

The paintings of Dutch artist Willem Weismann are both grotesque realistic and openly constructed. They question the precious parameters of our visual culture.

WeismannÂ¹s paintings are overwhelmingly detailed and by using big canvases Weismann creates a figurative, shining and very colourful world of images where the motives at first glance seem familiar. But the more the viewer tries to view the separate parts as a whole, the less he can trust his eyes, nor his mind. What looks like something very familiar, is eventually to far off to be familiar. The work shifts between reality and illusion, creating more questions than answers.

Most of the works in Shantytown seem to be the result of a worldwide mix up. Pieces from the western world meet parts from the third world somewhere halfway down the middle and the results are very unpredictable. With the plethora of stereotypes and semi-political implications it becomes impossible in these works to come to any definitive conclusions. Far away from society, the huts and tents in the work refer to a world wherein everything has not yet been determined and the world can be valued and reinterpreted anew. In the end the viewers are thrown back upon their own ideas and prejudices to judge and revalidate this newly created world.

We welcome you in the gallery

'Todays hippies are the assholes of tomorrow'

MOGADISHNI is pleased to present the solo exhibition 'Todays hippies are the assholes of tomorrow' by Christian Finne.

Newly graduated from the Royal Danish Academy of Fine Arts, Copenhagen Christian Finne works with drawings and installations which often have a direct connection to his own life and experiences. Inspiration comes from many sources like underground music, myths, superstition and psychedelic drugs.

Finne often uses his own body in his works in a kind of self-staging ritual Â­ for instance he is depicted dancing around in psychedelic colours at the EXIT show; the annual exhibition which presents the works of recent graduates of the Royal Danish Academy of Fine Arts. The use of the artist himself as subject underlines that Finne uses a form of narrative which deals with the personal in an epistemological approach.

Finne has a philosophic approach to life and has great concern for the human condition right now. Finne writes: 'Mankind has to change its behaviour, in both the local and global sense of meaning. Allowing violence and egoism to continue exercising its power on earth will - if nothing happens in the meantime - lead to a catastrophe sooner or later.' Spirituality is also an important aspect of both his way of thinking and his art. He writes: 'In the life of every human being, there is a moment when one gets a glimpse of the great All and the laws guiding the Universe. To most humans this is a moment that passes fast and it is not accompanied by any lasting insights. But to some, this is the beginning of a new phase in development.'