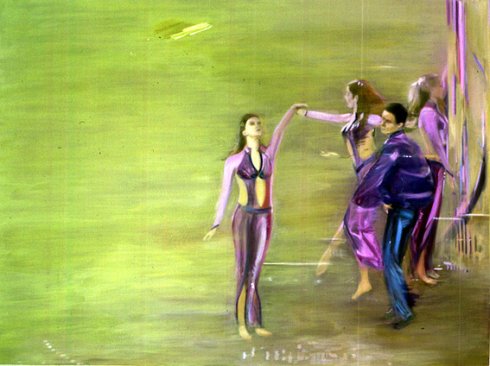 Julia Schmidt's paintings have a fragmentary character where emptiness stands against visual beauty and opulence. Combining art historical references with that of glamour and fashion, her paintings shift between ascetism and extravagance, and her careful focus on traces, details, omissions and shifting thematic inter-relations, which organise her work in terms of cycles, or groupings Â­ clusters, consistently reverberate concerns with value and artifice, use and ornament.

Oliver Kossack's works are pictorial aphorisms. He inhales his surroundings, intuitively juxtaposing disparate elements with stereotypic references to (art and cultural) history. Kossack plays with the multiple associative levels of language, often seeking ostentatiously literal transcriptions in his drawings, paintings and installations. Within this heterogeneous crossover of styles, childlike drawings - seemingly naÃ¯ve at first glance - operate as nasty reflections of the everyday, while fetishlike, sculptural paintings refer to a realm beyond the blatantly sexual or banally artistic. Kossack forces self-understood utterances to coil back upon themselves. Characteristically, taking the verbal (all too) literally his work functions as a catalyst of experience within the dialectic of self and society, creating a quirky cosmos of thought and image.

Julius Popp approaches scientific problems from an artistic perspective, in turn, achieving technically accomplished sculptures and installations. In collaboration with scientific institutes like the Fraunhofer Institut for Autonomous Intelligent Systems he looks for scientific systems to give expressions to his artistic thoughts. At UNION, Popp will exhibit Å’Bitfall', which represents a sculptural information curtain Â­ a waterfall made of information. The installation is created by water formed letters, words, and sentences. The information provided exists only for a certain period of time, constantly being replaced by a continuous flow of new information, representing an idea of reality that passes by.

Rigo Schmidt's works can be described as finely worked paintings in small format. They appear as isolated object studies and show technical perfection. Schmidt is inspired by scientific archives and exhibits, that are displayed in natural history museums, or other already-once exposed objects that create the foundation stone of culture and society. The exposed objects are stagnant and taken away from their original context. Schmidt examines the constructed scientific conception of the world and of history. Bringing these objects onto canvas and converting them into paintings, Schmidt brings them back to life and poses questions about issues of representation and a media-constructed reality.

Recently, Julius Popp exhibited in the Biennale of Electronic Arts 2004, Perth, Australia. Julia Schmidt is currently exhibiting in the 2nd Prague Biennial of Contemporary Art, Prague and Oliver Kossack recently exhibited in a solo show at B2, Leipzig, 2004. Currently, Rigo Schmidt is participating in a group exhibition at Wohnmaschine, Berlin.