Visa pour l'Image-Perpignan has always supported reporters, photojournalists, and others as well, taking a stance on the restructuring of agencies when that jeopardized so many jobs, and also defending freedom of expression, their freedom so that we can have reports on what is actually happening around the world, reports which so often, alas, are filtered and distorted before they reach us. 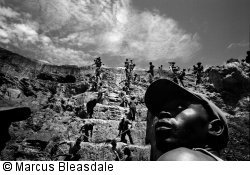 Iraq, the reelection of George W. Bush, Ukraine, Lebanon, Darfur, Chechnya, the death of John-Paul II and of Yasser Arafat, the bomb attacks in London, the evacuation of the settlements on the Gaza Strip, and so it goes on. The list is certainly not exhaustive. Year in, year out, it's the same: so many news stories around the world, often dramatic and very grim.

Some indignant critics will express disapproval - but this is becoming standard practice - because some of the reports are hard-hitting. Can anyone tell the story of the tsunami without showing bodies? Can we talk about Iraq without showing bomb attacks or mentioning the number of victims? It is not easy to report on what has actually been happening in Haiti without showing violence.
We have stories to show, but would never claim to be showing how things should be done.
We simply believe in the sincerity of the men and women who have reported what they have seen, and we want to share the reports with you, so that, along with us, you will think of what is happening out there in the real world and so that you will stop and ask questions and think.

The program also has some breathing space, some hopes and there are even some smiles.

Over seventeen years, Visa pour l'Image has become the unchallenged reference in photojournalism, and this is precisely because we have always been demanding, have been clear in the choices we have made, and honest in our commitments. And we have absolutely no intention of changing!

Visa pour l'Image-Perpignan has always supported reporters, photojournalists, and others as well, taking a stance on the restructuring of agencies when that jeopardized so many jobs, and also defending freedom of expression, their freedom so that we can have reports on what is actually happening around the world, reports which so often, alas, are filtered and distorted before they reach us.

Reporters travel the world all year long and are finding it increasingly difficult to gain access to areas where events occur; this is particularly the case in the Middle East.Only too often they have become hostages, their lives at stake for pressure and negotiations, and sometimes lost, simply in their bid to do their job.

They have no personal fortunes, their wealth being in their hearts and generosity; they have no political ideology as their one belief is in reporting news, conveying knowledge and truth; yet they are a target, easy prey as they are often out there in the middle of the action, but they are certainly not rash or suicidal.

Too many have been held captive, to many innocent people have been charged, while intolerance shamelessly prevails over their neutrality, and all they can do is wait for such injustice to run its course.We can count the days and months each one of them is missing, and we do it for each and every one of them.Time does not move at the same speed for them when in captivity, isolated, wondering what the next day will bring.

We may find it almost impossible to cope with the waiting, yet how much worse it must be for them?

I can only hope that my cries of outrage denouncing such barbaric behavior are heard by the hostage-takers, being conveyed by the power of the media here at Visa pour l'Image in Perpignan, and that they will realize just how horrific their actions are.

This sense of revolt we feel will provide us with even greater strength to pursue our joint endeavor, working through this festival, fighting for free and truthful reporting.