An Inaugural Group Exhibition: it brings together artists who draw upon their physical surroundings as a starting point for their creations. Working in various mediums, they reconstruct environments such as their urban surroundings, a rural landscape or the actual gallery space, into new, and at times, abstracted sites of their own. 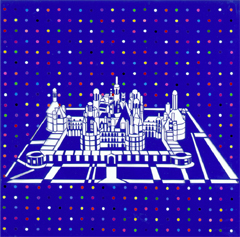 Priska C. Juschka Fine Art presents New Found Land, the gallery's first exhibition in its new location on West 27th Street in New York City. New Found Land brings together artists who draw upon their physical surroundings as a starting point for their creations. Working in various mediums, they reconstruct environments such as their urban surroundings, a rural landscape or the actual gallery space, into new, and at times, abstracted sites of their own.

In Nin Brudermann's mixed-media installation, the viewer is entangled in a startling futuristic setting, devoid of the outlet typically provided by an underlying fictitious plot. By introducing a reality that is seemingly subverted with gentle irony, she toys with the viewer's perception by evoking a ubiquitous, yet understated notion of Brechtian alienation.

Working in various mediums, Mauro Ceolin derives inspiration from the internet and videogames. In Expensive Look Without the Expensive Price, Ceolin formulated on the surface of a skateboard a fabricated skyline made up of statistical information of the most traveled and documented locations in the world according to web "bloggers. " In his acrylic paintings on computer mice, Ceolin strips videogame landscapes of their context, leaving them desolate and alienating. He then paints them on the very tool with which one maneuvers within the original site, further distancing them from their source.

Tamara Gayer appropriates an urban landscape, transforming its elements such as buildings and intersections into a blend of colors and patterns, which serve as expressions of her personal experience amongst these surroundings. In so doing, Gayer bridges notions of mental and public space, enabling the viewers to position themselves within the reconstructed site.

In her installation, Caitlin Masley re-invents the global urban landscape using buildings from Berlin, Chicago and Shanghai, and transforms them into "Portable" paper structures. The various elements are based in photographs Masley took of the buildings, which were later digitally manipulated in accordance to her experience within the sites. Having witnessed the process of the de-construction and re-building of these cities, Masley created a universal perspective of the metropolis, which mirrors her psychological and sensory impressions of the rapidly-developing environment.

Sean McFarland photographs cityscapes, only to later disassemble them by cutting out the different elements that comprise the scenes. From the pieces of these urban sites, he later constructs dioramas of a new landscape. Once completed, McFarland re-photographs the assemblage, thus reinstating coherence to the dislocated components.

In Dana Melamed's collages, one may be able to identify many of the architectural structures from which they are composed. By combining Xeroxes, archive photographs and sketches of existing and invented locations, the artist creates a unique and self-contained urban landscape, which develops and expands organically.

In his photographs, Daniel Mirer decontextualizes his architectural subjects by way of aesthetic choices, such as framing and formatting, ultimately transforming them into abstract, impersonal and unrecognizable locations.

The reconstruction of an environment takes on an added meaning when one observes the work of Amy Rathbone. Drawing upon the physicality of the gallery, Rathbone incorporates its walls into her labor-intensive work. By reinterpreting its structural function through personal experience, she develops an abstracted, and entirely subjective environment, which exists only within its current context.

In her floor installation, Carolyn Salas assembles a fictitious landscape within the limiting boundaries of the exhibition space. Fueled by her subconscious thoughts and personal narrative, she formulates an alternative and autonomous site of tranquility and reflection.

Tucker Schwarz uses her sewing machine to "draw" on fabric various bits of landscapes she had previously captured on camera. The resulting images trigger one's free associations relating to position and personal space, in a visually subtle and suggestive manner.

In constructing alternative environments, Jeni Spota relies primarily on her imagination, stimulated by experience and vision. The resulting invented universe is an amalgam of impossible miniature planets, fused together to create a futuristic abode.

Inspired primarily by architectural blueprints and technological sketches, Dannielle Tegeder creates seemingly abstract environments composed of interconnected recurrent forms, each representing a specific function in fantastical landscapes, such as tunnels and housing. In both her two and three-dimensional work, these various forms come together to produce an underground utopian system, which maintains its own continuous rhythm and flow.

Amy Westpfahl collected photographs from the New York Historical Archives for the purpose of documenting the transformation of the LES neighborhood. She later juxtaposed these images with current views of the area that were taken from the same vantage point as the originals. In order to exemplify the changes that the neighborhood has undergone, Westpfahl traced continuous fabricated skylines above the photographs, which join and part in accordance to the fluctuating configuration of the landscape.