Makings of the Sublime

By taking as a starting point the history of 19th century romantic landscape and its paradoxes, the works of James Ireland, Friedrich Kunath, Christopher Orr and Evariste Richer share the same positioning: to inscribe in a contemporary context the persistence of the landscape as a metaphorical place in relation to the world. Through various forms that go beyond the pictorial representation, the selected works renew a conception of landscape as a constructed object 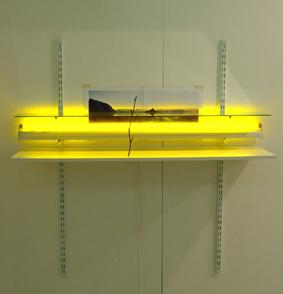 The exhibition Makings of the Sublime inaugurates the new programming of La Galerie, a programme that is marked by the intention to open contemporary art practice to other historical referents and fields of research, scientific research in particular.

By taking as a starting point the history of 19th century romantic landscape and its paradoxes, the works of James Ireland, Friedrich Kunath, Christopher Orr and Evariste Richer share the same positioning: to inscribe in a contemporary context the persistence of the landscape as a metaphorical place in relation to the world.

Through various forms that go beyond the pictorial representation (installations, sculptures, photographs, video...), the selected works renew a conception of landscape as a constructed object, by nevertheless continuing to believe in its evocative potential.

Thus Christopher Orrâ€™s paintings, filled with fog, and Evariste Richerâ€™s daguerreotypes, taking clouds as an elusive subject, agree with the romantic vision of a world open to infinity, while trying to control the unknown by minute observation or use of devices.

James Irelandâ€™s sculptures and Friedrich Kunathâ€™s installations build up the landscape like an anti-illusionist construction, using vernacular references and clichÃ©s of romanticism as we find in tourist imagery â€“ a landscape in which what is fake rivals the sublime.

After the spiritual momentum that marked the romantic period, and situated more by the side of the most minimal paintings by a Caspar David Friedrich or a William Turner, these four artists work to a reduction of the landscape model, through fragments, to its essential elements. They fabricate infinity, reconciling the banal with beauty, science with randomness, and the derisory with emotion.

Christopher Orr
Born in 1967 in Scotland. Lives and works in London.
Christopher Orr graduated from Duncan of Jordanstone College of Art and Design in Dundee, Scotland (2000) and from the Royal College of Art in London (2002). His work has been shown in numerous exhibitions abroad, but only once in France, in the exhibition (â€¦) le canard Ã©tait toujours vivant in the Abbaye Saint-AndrÃ© in Meymac (2005).
He is currently represented by IBID Projects in London and the gallery Arndt & Partner in Berlin.

James Ireland
Born in 1977 in the United Kingdom. Lives and works in Bristol.
James Ireland graduated from the Ruskin School of Fine Art in Oxford (1999). His work has been shown in numerous exhibitions abroad among them a solo show in Spike Island, Bristol (2003), but only once in France, at Triangle France in Marseilles (2002) within the context of a residency at La Friche la Belle de Mai.
He is currently represented by f a projects in London.

Friedrich Kunath
Born in 1974 in Chemnitz, Germany. Lives and works in Cologne.
Friedrich Kunath won the Peter Mertes prize of the Kunstverein in Bonn (2001). His work has been shown in numerous solo and group exhibitions abroad, and this is the first time he shows his work in France.
He is currently represented by BQ Gallery in Cologne, Blum & Poe Gallery in Los Angeles and Andrea Rosen Gallery in New York.

Evariste Richer
Born in 1969 in Montpellier. Lives and works in Paris.
Evariste Richer graduated from the Ecole Nationale des Beaux-Arts in Grenoble (1992) and the Ecole Nationale dâ€™Arts of Cergy Pontoise (1994). In 2003, he was awarded the prize of the 22nd Biennial of Alexandria. His work has been shown in numerous exhibitions abroad, and recently in Le Principe dâ€™incertitude at Public> in Paris and Scape at CAC in Vilnius, Lithuania, together with James Ireland.

With the support of the British Council

Entry to La Galerie is free.
Specialised personnel are permanently at your disposal to accompany you during your visit.

How to access La Galerie from Paris
By RER E (10 minutes): from Saint-Lazare/Haussmann or from Gare du Nord/Magenta, direction
Chelles, Gournay or Villiers-sur-Marne, get off at Noisy-le-Sec station, then walk 600 meters towards the HÃ´tel de Ville.
By metro + bus: line 11, get off at Mairie des Lilas or Porte des Lilas, then take bus 105 (direction Mairie des Pavillons-sous-bois), get off at Jeanne-dâ€™Arc. Line 5, get off at Eglise de Pantin then take bus 145 (direction cimetiÃ¨re de Villemomble), get off at Jeanne-dâ€™Arc.
By car: from Porte de Bagnolet, take the A3 in the direction of Lille, exit Villemomble, follow Rosny centre commercial, and then follow Noisy-le-Sec centre ville. From the Porte des Lilas, follow Mairie des Lilas, then in the direction of Romainville place Carnot, and then Noisy-le-Sec centre ville.