19 artists, 30 installations, 365 days. Led by international installation and performance artist Anne Bean, in collaboration with Mark Anderson, the show explores notions of capturing time through the natural and complete cycle of a year. Inspired by over 40 years of working with time processes, Anne invited 18 artists to work on individual ways of 'capturing' the year, through ideas of memory, process, metaphor and metamorphosis. 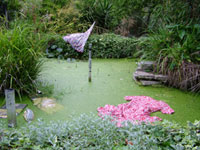 For exactly one year, the disturbing secret spaces, buildings, monuments, discarded objects, natural environment, visitors and activities of Southwark Park have inspired artists to make subtle magical transformations and interventions using smouldering incense, rotting apples, vintage dresses, decomposing flowers, performance, music, film, photography, lenses, light, time-keeping devices and sculpture. The year of Reap culminates in an epic celebration during September and October. Led by international installation and performance artist Anne Bean in collaboration with Mark Anderson, Reap explores notions of capturing time through the natural and complete cycle of a year. Inspired by over 40 years of working with time processes, Anne invited 18 artists to work on individual ways of â€œcapturingâ€ the year, through ideas of memory, process, metaphor and metamorphosis.

Whilst each project has evolved in vastly different ways throughout the year, they will all fully manifest from 17 September 2005. Throughout the year, Anne Bean installed several works for Reap in which transformation could be witnessed, including: Twelve Hundred Fathoms and Ashes, a year of continuously smouldering incense creating a floor drawing of ashes and threads; Remember Me, a gradual decomposition of 5000 apples slowly revealing a hidden message; Shadow Deeds, the shadow of a globe caught in a year long drawing, 365 Dresses, seven flowery dresses are placed each week in the sinister â€˜secret gardenâ€™ of Southwark Park; The Artistâ€™s Breath: Homage to Manzoni, a balloon containing one-year old breath that slowly seeps into the space and Deflowered, in which decaying photos of flowers are placed next to the actual decaying flowers themselves.

In Todayâ€™s the Day, Anne asked 72 people to be custodians of a teddy, physically or metaphysically, for a year. The identical and pristine teddy bears are placed in extra-ordinarily diverse locations throughout the world including the insect house at London Zoo, on top of a mountain in the Pyrenees, in a nuclear bunker, under a North Sea oil rig, in a sacred Maori cave, in the Tate archives, between the tides on the Thames, on an island in the Venetian lagoon, on a Moroccan rooftop and in a Zambian school. They will be returned to Southwark bearing the evidence of their journeys to be exhibited at Coleman Project Space. Anne has also collaborated with Mark Anderson on Annieâ€™s Year, a growing series of fifty-two photographic portraits taken weekly of Annie, born at the beginning of the project, who will be one year old when Reap comes to an end. Multiple versions of one photograph of Annie taken soon after birth are also in the Cafe Gallery Projects courtyard, gradually fading and decaying throughout the year. On each equinox and solstice, a Jolly Roger flag has been hoisted by Richard Wilson aboard his sculpture, Slice of Reality. The four flags with their skull and bones weathered and deteriorated to varying degrees, can be witnessed on the sculpture, by the river pathway passing the Millennium Dome, and from 17th September as Jolly Roger in the park.

Mark Andersonâ€™s Countdown was set using the mysterious strangeness of an ionized Nixie Tube on 30 October 2004. Counting down the 31,536,000 seconds of the year, a striking device will be activated when zero is reached on 30 October 2005, marking the end of Reap. His Light Year, also marks time, collecting and transforming solar energy through the year and subsequent release on 30 October 2005 as a series of brilliant, half million volt high-energy sparks each lasting, an a millisecond. Andersonâ€™s other projects include Plane View, a weekly photographic record of a plane tree, taken through the window of the former Clare College Mission Church in Dilston Grove and Magnifiers, using magnifying lenses to make a tracing of the sunâ€™s journey onto thermal paper inserted under glass. Graham Fagen works in metal for Annual Perennial, his bronze cast of a fir tree representing nature and the environment, and a memorial in the tradition of Victorian public monuments. In the â€˜secret gardenâ€™ Marcus Coates is making a film inspired by Henry David Thoreauâ€™s Walden, in which the writer rejects â€˜civilisedâ€™ life and builds himself a house in the woods close to the town. Lucy Baldwynâ€™s piece Bandstand, features a silent video of a lone band member projected onto a blank score on a music stand in the bandstand in Southwark Park. David Chapman also uses video to document a series of performances in his work, Rituals, which responds to some of the traditional ceremonies and rites that once marked the passing of the year.

Filmmaker Emily Richardsonâ€™s film BLOCK explores the incidental activity that takes places inside and outside a tower block overlooking Southwark Park over the Reap year. The passing of the year is also evidenced through Holly Dartonâ€™s Public Snap Shot in which she leaves disposable cameras around the park, tied to railings and benches, for park visitors to use. More abstract change is a feature of artist, Rachel Cohenâ€™s piece, Chinese Whispers, in which a Japanese textile drawing is copied and copied and copied and new evolving images emerge. Growth and nurturing form part of Gail Dickersonâ€™s three projects, Growth, Seeding and Cultivation, in which metals like copper, brass and iron, and metal objects such as nuts, bolts and nails are exposed to the elements to oxidise, crystallize and change colour and form, leaving impressions on soil and paper. Artist zâ€™ev is collecting bits of metal on the walk between his house in Peckham and Southwark throughout the year that will eventually form a wind sculpture in one tree in the park and, on the final night of Reap on 30 October, will be played as a concert in Dilston Grove. Growth is also a central concern of Miyako Narita, who has once a month, been filming the same child, Yma (meaning now in Japanese), playing with a ball in Southwark Park.

The film captures the child playing ball with both her past and future self. Lucille Power also plays ball in her project based on her membership of a traditional bowling club in Southwark Park. For Yearnings, five Reap artists were invited to witness a short performance by Anne Bean at 8pm on 27th October 2004. Exactly one year later they will each re-enact the performance purely from memory. Meg Mosley used her interest in the human desire to control time by giving disposable cameras to around 30 people and asking them each month to choose an object that they feel most defines them at that point. Artist Brian Gilson, who has a special interest in foraging and ancient recipes will â€” for the private view â€” make quince chutneys, pickled nasturtium seeds, bramble juice and other delectables to accompany cheese and wine made by vintners and cheesemakers who began the fermentation and maturation process on 17 September 2004. Harald Smykla, Eden Solomon and Illur Malus Islandus have collaborated with the children of Redriff Primary School to produce a range of time-based projects over the year.

Bio:
Anne Bean is an internationally-known installation and performance artist. Born in Zambia and resident in the UK, her evocative work encompasses a range of media including slide projections, drawing, photography, video and sound using a wide range of materials from fire and pyrotechnics to weather balloons and wind to steam and honey. Since 1970, Anne has presented solo and collaborative projects incorporating static and time-based visual art, sound and performance extensively at art venues, festivals and unique sites throughout Europe, USA, Africa, Mexico and Japan. Reap is an Artsadmin project for CafÃ© Gallery projects, London and Southwark Park, supported by Awards for All, Arts Council England, London and Southwark Council. A year-long education programme exploring time-based processes in Redriff Primary School, Rotherhithe is supported by the Paul Hamlyn Foundation.