Minimalism and After IV

New Aquisitions. The focus this time is on historical and contemporary positions from Great Britain and USA 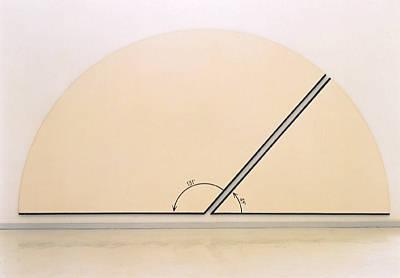 The 'Minimalism and After' exhibition series was conceived in 2001, as Minimalism is one of the key areas in the DaimlerChrysler Collection's long-term purchasing strategy. We now see that we anticipated important exhibition trends.

Several major museum shows, from Los Angeles to Houston, New York, London and Wolfsburg - outstanding were 'A Minimal Future' and 'beyond geometry' in Los Angeles - were recently devoted to Minimalism and Geometrical Abstraction as an important phenomenon in Europe and the USA around 1960. Many of the names we come across here have featured in the DaimlerChrysler Collection's exhibitions since 2001 in Berlin, Karlsruhe, Detroit and Pretoria.

The contemporary return to the history of effect, and the recalling of many artists who have wrongly been forgotten today, is relevant from our point of view, in that a continuous discussion of the aesthetic, political and formal foundations of Minimalism as a driving force behind contemporary art can be heard today.

It should be mentioned in passing here that the most interesting designers and architects have also developed a highly sophisticated formal language going back to premises ranging from Mies van der Rohe to Donald Judd.

The focus this time is on historical and contemporary positions from Great Britain and USA. About thirty new acquisitions by 21 artists will be on show, showing early abstract-minimalist artists like Michael Heizer (USA), Jeremy Moon (GB), Michael Kidner (GB) or Marcia Hafif (USA) alongside the most recent approaches by artists like Jim Lambie (GB), Ian Davenport (GB), Tom Sachs (USA).

The 'Minimalism and After' exhibition serie:

'Minimalism and After I', 2001, focused on European contemporary tendencies, including forerunners like Andre Cadere, Robert Ryman and Jan Schoonhoven.

'Minimalism and After II', 2003, highlitened exponents of the 1960s like John McLaughlin (USA), Charlotte Posenenske (D) or Herrmann GlÃ¶ckner (D) in a dialogue with contemporary minimalist trends.

'Minimalism and After III', 2004,concentrated on a dialogue between American and German artists from 1950 to today.