I saw the light. Artist's work has evolved as an autobiographical narrative that charts her desire to become a camera, her flight into ventriloquism and her most recent attempts to become a projector. In this exhibition Seers explores the 3 main phases of her process in the form of 3 video works and a book work. 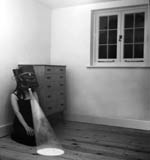 I saw the light

Gasworks Gallery is pleased to announce its upcoming exhibition I saw the light, a solo exhibition by the artist Lindsay Seers. Her work over the past ten years has evolved as an autobiographical narrative that charts her desire to become a camera, her flight into ventriloquism and her most recent attempts to become a projector. Seers has performed and made hundreds of images by using her own body as a camera, locating the photographic process inside her body to become an image receptor â€“ her mouth cavity is the camera body and her lips the shutter and aperture. She has also performed the story of her â€˜life as a ventriloquistâ€™ in a number of cinemas/venues around the world. This exhibition will be the first expression of her life as a projector.

The body of work interweaves elements of photographic theory, philosophy and recent scientific research and maps them onto actions and processes that define her life story; through this she creates a unique approach to photography and projection.

In her exhibition of new work at Gasworks, Seers explores the three main phases of her process (camera; ventriloquist; projector) in the form of three video works and a book work. Centre stage is the most recent development in her narrative which falls at the point where her life as a camera has become untenable and she realises herself instead as a projector.

The video works for the exhibition are in the form of documentary films which draw inspiration from biographies made about artists for TV/cinema; these pieces feature a number of experts elucidating the theory and impulse behind the artistâ€™s processes and their results. The works featured in the documentaries come directly out of Seersâ€™ recent Triangle Arts Trust fellowships to Paraguay and Mauritius.

I saw the light will be Lindsay Seersâ€™ first public solo exhibition in London, and will form part of a wider project by the artist that incorporates the exhibition (and performance) touring to City Art Gallery, Leicester; and the Grundy Art Gallery in Blackpool; as well as her solo exhibition at the Gallery of Photography, Dublin and commissioned work for Smart Projectsâ€™ exhibition Adam in Amsterdam.

Lindsay Seers will tell her side of the story in a performance with DVD projection, in the gallery on Sunday 30th October at 3pm.