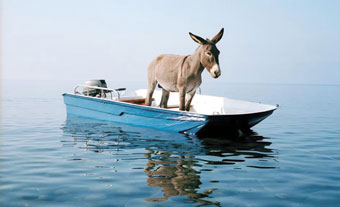 Art, Life and the Tourist's Eye

With nearly 700 million people travelling internationally each year, tourism has become the largest industry in the world. But is our compulsion to record the world around us aiding in its destruction? How universal is our experience of tourism - from place, to culture, to person? Will contemporary art and architecture ever substitute natural wonders and ancient monuments? Opening on 6 October 2005, Universal Experience: Art, Life, and the Touristâ€™s Eye is an ambitious new exhibition at the Hayward Gallery that explores these questions and others through the work of 50 major contemporary artists from across the globe. Together, they reveal how tourism is not only transforming the world we inhabit, but also revolutionising the way we view and understand our surroundings at home and abroad.

Universal Experience is both an exploration of the phenomenon of global tourism and an adventure and attraction in itself, and will occupy the entire Hayward Gallery and sites across the South Bank Centre. Spectacular installations and sculptures, large-scale film projections and intimate photographs and videos will transport the visitor on a journey to real and imagined spaces and places, backwards and forwards through recent history. Among those artists featured are Darren Almond, Chris Burden, Maurizio Cattelan, Tacita Dean, Peter Fischli and David Weiss, Felix Gonzales-Torres, Gabriel Orozco, Robert Smithson, Thomas Struth, Rirkrit Tiravanija, Zhan Wang and Andy Warhol.

The earliest works in the exhibition date from the 1960s, when tourism first became a significant force within contemporary society. Included is Andy Warholâ€™s epic Empire (1964), an eight hour long film of night falling on New Yorkâ€™s iconic skyscraper; Robert Smithsonâ€™s cult classic Spiral Jetty (1970), which describes the creation of an earthwork in a remote corner of Utah desert; and John Hindeâ€™s meticulously staged tableaux of holiday makers in the ballrooms, lounges, pools and playrooms of Butlinâ€™s holiday camps - the most popular picture postcards ever produced in the UK.

As the art world has become increasingly international, so artists have become more mobile, itinerant and responsive to their changing environments. Showing for the first time in the UK, The Moment (2004) is a vast kaleidoscopic audio-visual installation by Doug Aitken, capturing the acute sense of disorientation experienced on waking in an unfamiliar place. By contrast, globetrotting Slovakian artist Roman Ondak rejects new technology to embrace traditional story telling. Ondak describes famous buildings and sites seen on his travels to relatives and friends in his native Bratislava. The pictures and models they make based on his narrative are displayed together to form a microcosmic tourist world (Common Trip 2000).

New technologies and our growing image-culture has brought about a boom in the creation of spectacular tourist attractions, with contemporary landmark architecture, museums, theme parks, and celebrated works of public art becoming tourist destinations in themselves. Marine Hugonnierâ€™s film The Last Tour (2004) takes the viewer on a fictional balloon trip around the Swiss Alps, juxtaposing shots of sublime snow capped mountains with a costume parade at an amusement park to suggest that in the future we might only be able to experience the Matterhorn through its replica at Disneyland. Hiroshi Sugimotoâ€™s photograph of a recreation of the Biblical Last Supper, taken in a Japanese wax museum (The Last Supper 1999) invites us to consider how displacement in time and space confuse the authenticity of tourist experience. Thomas Struthâ€™s photograph, National Museum of Art Tokyo (1999) captures a crowd of Japanese tourists jostling to catch a glimpse of a priceless painting through bulletproof glass.

Darker aspects of tourism are also considered, including the continued allure of sites associated with tragedy and the heightened vulnerability of those in transit. Thomas Hirschhornâ€™s Chalet Lost History (2003) is a provocative, labyrinthine installation: galvanised by media coverage of the looting of Baghdadâ€™s archaeological museum, it equates the inherent exploitation of military conquest with tourism and pornography. Darren Almondâ€™s video installation Ozwiecim (1997) takes its title from the Polish town known more infamously as Auschwitz, and captures â€˜holocaust touristsâ€™ as they arrive and depart in buses from the site of the Nazi death camp. American/Vietnamese artist Dinh Q. LÃª makes glossy photographic prints of the picturesque beaches and villages of her homeland, adding ironic text that mimics the language of travel agency posters. â€˜So sorry to hear you are still not over usâ€™ says one showing three traditionally attired young Vietnamese women. â€˜Come back to Vietnam for closure!â€™.

Universal Experience is organized in collaboration with the Museum of Contemporary Art of Chicago (MCA), curated by its Manilow Senior Curator Francesco Bonami, and has its first European showing at the Hayward Gallery.